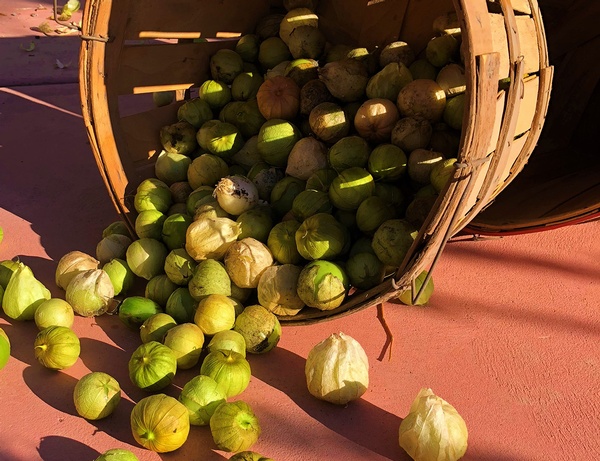 Laura and Tom are the kind of keto-friendly couple we all admire. Hard workers, annoyingly thin and fit, cheerful, literally on the go nonstop, even in the midst of a pandemic. This pair is especially busy now, mid-September, with their town garden literally tumbling to the ground with a myriad of matured fruits and veggies.

Tom’s what you might call meticulous. He began the garden late last winter, starting all the vegetables by seed. (This is a man who knows a 3-year-old beet seed is better to plant than last years.’) A self-taught master-grower, he produces hundreds pounds of his own food every year.

Laura, the harvester and knower of all things ripe, grew up in the land of the home-canned (Minnesota). It’s a process as natural to her as making a pot of coffee. Only this year, with all the “victory gardens” being toiled across the country, wide-mouth canning jars and lids are as rare as, well, toilet paper was last spring. Online, $70 will buy you a dozen, with no mail-by date guarantee.

But back to the garden.

Fat cabbages and pumpkins, watermelons and cantaloupes peek out here and there between fennel blossoms, squash and peppers, onions, parsley and cilantro. Tri-colored grapes wrap around a grayed wooden fence, while the very heavy Spanish pear tree trembles above it all.

Without much thought, Tom planted a couple tomatillo seedlings a few years back and ever since, with their graceful shape and tiny yellow flowers, they have dominated, displaying pretty papery green husks split open with fruit ready to pick. It’s a no-fuss, no-brainer annual, re-seeding itself in any sunny, acrid spot. But the challenge, according to Laura, is that they’re not exactly petite.

“I just canned 18 pints of salsa verde with them, and it’s already time to pick again.”

A single tomatillo plant can easily produce 10-15 pounds of fruit. And being an “indeterminate,” they’ll continue production well into the chilly fall weather.

“Honestly, I wish they’d just give me a break this year,” she says with a lovely, exhausted smile.

A neat package of seed is left to blow far and wide if the husks aren’t all picked up, which is how the tomatillo has survived well beyond a millennia. According to the journal Science, a 52-million-year-old fossilized tomatillo was recently discovered in the Patagonia region of Argentina. Was it the food of dinosaurs?

It’s a tough, tart fruit that originated in Mexico and was then domesticated by the Aztec, who dried and ground the berries to produce a meal used for bread-making. It was a cardinal food crop for them, as well as for Native Americans, who boiled the fruits with a small amount of water and ground it into a mortar with raw onions, chilies and coriander.

The lower moisture content of their dried seed increased the chance of being carbonized in fire. Thus, charred tomatillo seeds dating from as early as AD 298 have been found as nearby as the Yellow Jacket pueblo site in Cortez, the Salmon Ruins in Farmington and just west of Albuquerque, at Caja Mesa.

These days, it’s a very common plant that’s wildly ignored, and sometimes even delineated as a pestering weed. Despite their edibility, anything not wanted in one’s garden can be thought of as such. Take my friend, Missy, a small-town, easy-going newspaper editor (of the one you’re reading). She considers them as an invasive flora with savage intent.

“I swear those things will outlast the apocalypse,” she says. After ripping up their entire lot (where the plants had gone nuts) during a renovation, one single tomatillo plant was found the next year struggling (surviving) within all the rubble. “It was like the Charlie Brown X-mas tree of tomatillos. It even bore a fruit or two, the scappy effer.”

The fruit’s name is a bit of a misnomer. In Spanish, tomatillo means “little tomato.” They are distant cousins, but largely the now forgotten ones of the nightshade family.

Which is a shame. Not only are tomatilllos an easy way to add a “new” and unusual edible to your kitchen garden (you may want to keep them caged), they’re also bursting with a long list of antioxidants that contain lots of anti-cancer potential.

But the genuine question is, how do they taste?

A bit sour and sweet, like a green apple or an unripe strawberry, with bright citrus notes and a dense, dry, seedy texture. Eaten raw, they can have a bracing acidity that’s nearly effervescent. Dried (to me) they taste like a raisin tossed with cranberry sauce. Both ways, they’re a curious fibrous component, especially for vinegary autumn salads.

It comes as a surprise when the ping-pong ball-sized fruit, hard as stone and Cimmerian green, melts so quickly into a slightly sweet, mellow, frothy tasting broth over heat, and fades yellow to light green in color. A keystone of Mexican cuisine, tomatillos are traditionally combined with chili peppers; their coolness balancing out the former’s spice.

Which brings us back to Laura and her award-winning salsa verde. She’s knee-deep in prep today. I touch a tomatillo readied for slicing. Shiny but still rather tacky, which nutritionally is a dandy thing – a tidbit most people don’t know. Her little kitchen very well might smell of an ancient Mayan’s dwelling. Fruity. Earthy. Good.

Miss Laura cooks nothing in half-measures. She’s got three good-sized sheet pans of tomatillos roasting, two in the oven, one outside on the grill. They’re heaped along with cherry tomatoes, habañero and jalapeño peppers, a sprinkling of fresh oregano, cilantro, purple basil, and plenty of garlic and onion. After everything caramelizes, she simmers it for a short time in a large bath of fresh lime juice. Before this gets buzzed up in the blender, and while it cools, she adds her secret ingredient (monk fruit). Then it’s off to the canning station, i.e. the long dining room table where, come January, the salsa will be happily gobbled up.

We sample the chunky bad-assness warm, with Tom’s nicely seasoned, dehydrated zucchini chips. For them, this batch is a fleck too spicy. Not for me. It’s juuust right. The greenish condiment produces a nice, slow burn that’s as welcomed as our recent cool weather. And suddenly, I’m back in love with fall (endlessly).