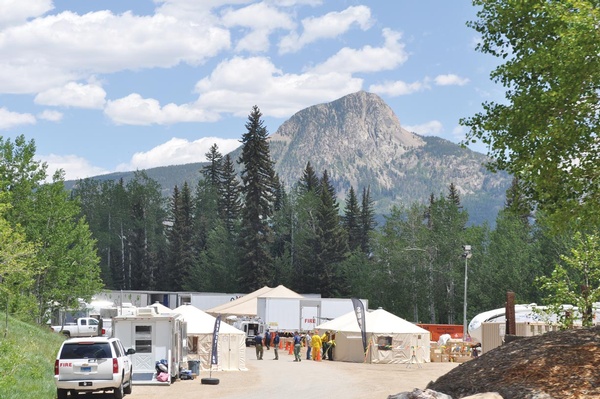 The Rocky Mountain Incident Management Blue Team set up its base of operations at Purgatory Resort. The lower gravel parking lots, pictured above, house logistical and command tents while the Columbine beginner ski area is home to the firefighters' tent city./Photo by Scott Wachob

There kids and newcomers once took their first turns on skis and snowboards, hundreds of firefighters have pitched their tents. The crew battling the 416 Fire north of Durango has grown to more than 600 – and all of them are calling Purgatory Resort home.

The 416 wildfire started around 10 a.m. on Fri., June 1, and quickly spread in the Mitchell Lakes area west of Highway 550. That afternoon, evacuations were already under way and Purgatory was closed. The next day the cavalry arrived.

They are called the Rocky Mountain Incident Management Blue Team, and they travel all over the country to tackle emergency situations, including wildfires, hurricanes, floods and even riots.

The team’s commander, Jay Esperance, has been working with incident teams for decades and was even part of the management team at Ground Zero in September 2001. At a community meeting on Tuesday night, Esperance said his current team was in San Miguel County working to put out the Horse Park Fire (which is now 90 percent contained) when they were re-assigned to the 416 Fire on Saturday.

The team arrived and set up camp in the Columbine beginner area and the lower gravel parking lots at Purgatory. It’s like a mobile city, complete with lodging, food, bathrooms and meeting areas.

“Purgatory is proud to host the Rocky Mountain Blue Team,” Colin McBeath, general manager for Purgatory Resort, said in an email. “We have made our facilities available and are committed to supporting them with whatever they may need.”

McBeath said the resort will receive some compensation for providing the Blue Team space and facilities, although he couldn’t say exactly how much.

Purgatory’s management team, he explained, is working closely with everyone involved with the 416 Fire – the Blue Team, U.S. Forest Service, local law enforcement, county officials, the Colorado Department of Transportation and others – to monitor conditions. However, it is ultimately up to the resort whether or not to re-open.

“Although safety is always our first priority, we also have a commitment to our 250 employees,” McBeath said. “We would obviously like to see them working at the earliest opportunity.”

With that in mind, Purg planned to re-open for business Fri., June 8, just for the weekend. However, on Friday, the resort announced it will be closed until further notice.

“The U.S. Forest Service announced yesterday that Forest Service land within Purgatory’s permitted area is presently closed to all activities due to the 416 Fire,” he explained. “This closure will remain in effect through July 9 or until the closure is rescinded.”

As of press time, the 416 Fire was more than 4,000 acres in size and just 10 percent contained. Evacuation orders were still in place along the 550 corridor from Electra Lake Road to Baker’s Bridge. Pre-evacuation orders, which extend from the San Juan County line in the north to Mead Lane in the south, were expanded Tuesday evening to include additional neighborhoods in Hermosa on the east side of Highway 550.

“One of the things we want people to know – this is a full-suppression fire,” Bawden said.

At times forest managers will use wildfires as a tool for forest health. This is not one of those times.

The rocky and steep terrain in the Hermosa Creek drainage is difficult to access; weather conditions in the Southwest are hot; the forest is flush with dry fuel; and the entire county is suffering from an exceptional drought.

“Right now those factors aren’t in our favor,” Bawden explained.

Firefighters will be stationed at Purgatory until the fire is completely out. And unfortunately, no one knows just how long that will take.

Anyone out of work due to the fire can get job help (or other questions answered): 385-8700

For the latest updates: www.facebook.com/416fire