Playin' in the dirt
Composting company, 9-R team up to put lunchroom waste back into the soil 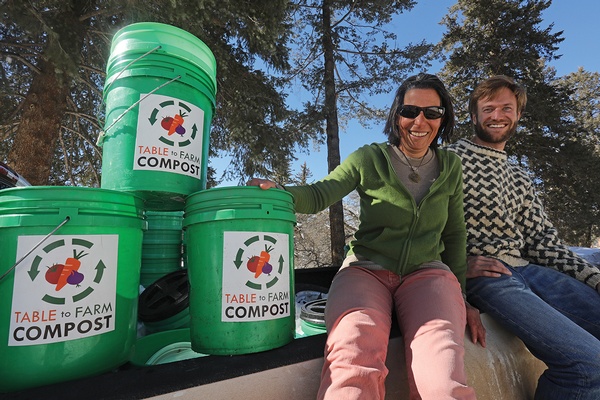 Monique DiGiorgio, left, owner of Table to Farm Compost, and Evan Walters, operations manager for Table to Farm, pose on one of their trucks this week. Table to Farm recently started working with School District 9-R to start a lunchroom composting program at Riverview Elementary. In one year, they saved nearly 1 ton from the landfill. Plans call to expand the program next year. /Photo by Stephen Eginoire

It started as a small idea to reduce waste. A couple years ago, Sarah Douglas and another Riverview Elementary parent, Lisa Mastny, realized just how much waste was created during one elementary school party.

The paper plates, plastic silverware and napkins would fill up the trash can fast – and all of it was going straight to the landfill.

So, with the help of Alpine Bank of Durango, the two found a way to outfit the class with reusable dishware. From there, they were able to get reusable dishware to other classrooms, teachers and school staff.

The quest to tackle the trash moved to the lunchroom during the 2017-18 school year. Douglas and Mastny didn’t have the resources to start a composting program, but they were able to work with local farmers to use some of the food scraps as feed for pigs and chickens.

Douglas said that year the students and staff at Riverview kept 96 gallons of lunch waste and 160 gallons of food-prep waste – for a total of 256 gallons, or nearly 1 ton – out of the trash can. That’s in addition to the 1,600 unopened milk cartons they donated to Manna Soup Kitchen and the 2,500 markers they recycled.

This year, the small idea to reduce waste has grown even bigger. Durango 9-R School District has teamed up with Monique DiGiorgio, who owns Table to Farm Compost, a curbside composting service.

Together, they started a composting program at Riverview last October – which means the school can collect even more organic waste than they could when it was used as feed – and plan to implement it in all the area’s schools.

“My hope is that it would become a district-wide program,” Ron Reed, supervisor of facilities for Durango 9-R, said. “I think environmental sustainability is important for everybody. We’ve got to start getting the younger generation involved.”

In an effort to expand the composting program, DiGiorgio started a Go Fund Me Campaign with the goal of raising $8,000.

DiGiorgio said they had to reach out via Go Fund Me because Table to Farm isn’t a nonprofit – at least not yet. She hopes to create a nonprofit branch of her composting venture later this year, so donations to the school program could be tax deductible. The business would still run as it does today, servicing residential homes across the area.

If the Go Fund Me campaign can make its goal, the school district would be able to help cover the cost of pick up and expand the composting program to other schools – starting with Park Elementary and Escalante Middle School this spring. It would also allow the Table to Farm team to engage with the students, going into the classroom for educational events and taking the students on field trips to Savannah Tree Farm, where all the composting happens.

DiGiorgio and Evan Walters, the operations manager for Table to Farm, said the idea is to allow the students to see the entire process – from scraps to pickup to soil and back to the garden.

“I think it’s important to normalize composting,” DiGiorgio added. “Organic material is not a waste, it’s a resource.”

Keeping the organic waste out of the landfill does more than just limit the need for bigger landfills, it also means less methane.

Organic materials, like food waste and  yard clippings, release methane when they decompose. Methane is 86 times more potent than carbon dioxide over a 20-year period, according to Table to Farm’s website.

“Most people don’t know about the amount of methane leaking out,” DiGiorgio explained.

The Southwest corner of Colorado adds 91,000 tons of trash to landfills every year  according to a 2015 Southwest Colorado Waste Study. About 25 percent of that is considered recoverable organic waste that could have been reused – maybe to feed livestock, or transformed into a nutrient-rich compost for gardens and farms.

Walters said some weeks at Riverview, he’ll pick up four 5-gallon buckets of organic material for composting. With  about 25 weeks of school since the program began in October, it is possible Table to Farm could help keep hundreds of gallons of organic waste out of the landfill.

And, that’s just for one school.

“We could transform the way we view organic materials,” DiGiorgio said.

“(Composting) would just be part of the school system. That’s what this project is ... the jump off to get this started.”

Find out more about the effort to raise funds for expanding the composting and education campaign at Durango 9-R School District, visit the Go Fund Me Campaign website at: www.gofundme.com/compost

To find out more about composting and the curbside services available, visit the Table to Farm Compost website at: www.tabletofarmcompost.com 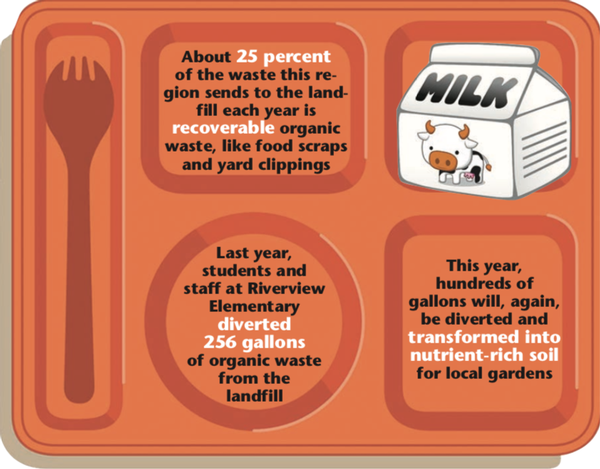 Monique DiGiorgio, owner of Table to Farm Compost, hopes to overcome the challenges inherent in large-scale composting operations with help from the Colorado NextCycle program, a part of the Colorado Department of Public Health and Environment. Her idea is to create San Juan Organics, “a public-private partnership of waste-recovery businesses and economic development institutions,” according to her application for the program. As one of nine teams selected this year, she’ll receive assistance refining her business model, have access to grant opportunities and more.