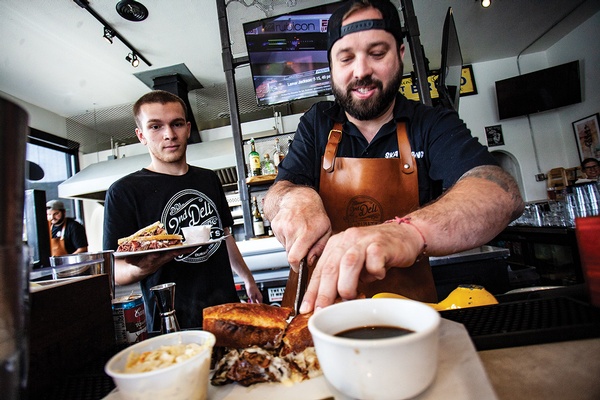 Colin Brunson slices up a roast beef sandwich at the 2nd Deli on E. Second Avenue and College Drive, in the old Sushitarian spot. Brunson co-owns the new deli with friend Zach Williams (far left background) – both formerly of JBo's./Photo by Stephen Eginoire

If you’ve lived in Durango for more than a year, you know how difficult it is to walk down the street without bumping into someone you know. Unless you’re a total hermit, and then kudos to you. Sometimes, it’s impossible to even get through the produce section at the grocery store without seeing your kid’s teacher or the guy from the coffee shop. After all, Durango is a friendly place; a place where everyone knows your name.

It’s because of that same cheery reason that best friends Colin Brunson and Zach Williams decided to open up 2nd Deli and Spirits. Although you won’t find Woody Harrelson or Ted Danson sliding beers across the bar, you will find some supremely friendly faces who will try really hard to remember your name.

The new sandwich shop, which officially opened last Mon., Aug. 13, sits on the corner of East 2nd Avenue and College Drive. It’s the spot where Toshi’s used to be, and Sushitarian before that, and Johnny McGuire’s before that. Brunson knows the building has hosted a long lineage of businesses over the years, but he doesn’t see the building’s turnover as out of the ordinary or cursed with ghostly juju. Rather, he’s noticed the turnover mostly because, in the 15 years he’s lived in Durango, he’s been keeping close tabs on the property. Why? Because he’s always wanted to turn it into a bonafide delicatessen.

Brunson grew up in Kansas City and Chicago, two places where sandwich shops were a pickle a dozen and it was easy to find a “cool” deli. When he moved to Durango and noted the lack thereof, the idea of opening one started swirling around in his head.

“It’s always been a dream of mine. I’ve always wanted to sit down with a good sandwich at a sports bar with a beer,” Brunson said.

It’s not a whole lot to ask for, but since he moved to Durango in 2003, he’s surprisingly had a hard time finding his low-bar dream.

Brunson moved here to go to school at Fort Lewis College and started working at JBo’s, where he learned to bartend and work the kitchen. It’s also where he and Williams, also a bartender at JBo’s, met and became besties.

When Brunson first popped the co-entrepreneurial question to Williams, though, it wasn’t an immediate or emphatic “yes.” Williams was initially apprehensive and turned down Brunson’s offer.

“I didn’t want to ruin our friendship, we probably would end up trying to kill each other,” Williams said.

But Williams slept on it, and when he came to his senses the next morning, he knew he couldn’t let the opportunity of a drawn-out dream pass him by.

“I woke up and just knew there’s no way I’m going to let him do this without me,” Williams recalled.

“Nor could I without him,” Brunson added. “There’s no way.”

So far, the partnership is working. Of course there are still kinks that need to be worked out and inevitable differing of opinions. But the two are spearheading their project with open minds, hearts and – perhaps most importantly – lines of communication.

“We’re very up front and honest with each other. And we have a ‘talk and a hug’ every night,” Williams said.

Although it’s not written in their business contract, the talk-n-hug might be the most important tool to the partnership – that and really, really good sandwiches.

The deli’s menu consists of in-house cured meats and house-made dressings to accentuate the already popular pastrami, roast beef, turkey and plethora of other hot and cold sandwiches and menu items. Other deli classics like potato and pasta salads as well as beer, specialty cocktails and wine round out the menu.

And for those diehard deli fanatics: if they don’t have what you’re looking for, Brunson is happy to try to make it happen. “This place is going to morph into what the demand is,” he said. “We’re all ears, and we’re trying to listen to what the community wants.”

A sort of communal talk and hug, if you will.

In fact, flexibility and change has been on the menu since day one. When the 2nd Deli took the keys in January, it also took the reins of revamping the entire interior of the establishment. With the help of a masonry friend, the 2nd Deli gang built a fresh space that included new kitchen, bar and seating area with rustic wood tables that adds to the already-inviting atmosphere. (*Sorry, but Toshi’s magic toilets are no longer.)

The recipe seems to be just right, already with long lines out the door for lunch. The first week has been promising, so much so that the deli is already making plans to expand its offerings. Eventually, they would like to add a bike delivery service as well as an option to place high-volume lunch orders in advance for companies and large gatherings. The bike delivery will also be a great option for folks who rush lunch or work so hard they never want to leave their desks (said no one ever).

But what Brunson and Williams want more than anything is for folks to come in, have a sandwich and a beer, and for them to get to know your name.

“We want to have a fun, lively place where you can sit down. I don’t know about you, but I want to say ‘hi,’ ask how it’s going,” Brunson said. “We want to be a local’s favorite place where everyone feels really comfortable.”

And in our community, where the bank teller knows the name of your dog and you can’t pick out paint, let alone toilet paper, without seeing someone you know, there’s no reason the 2nd Deli can’t be another place where everybody knows your name. 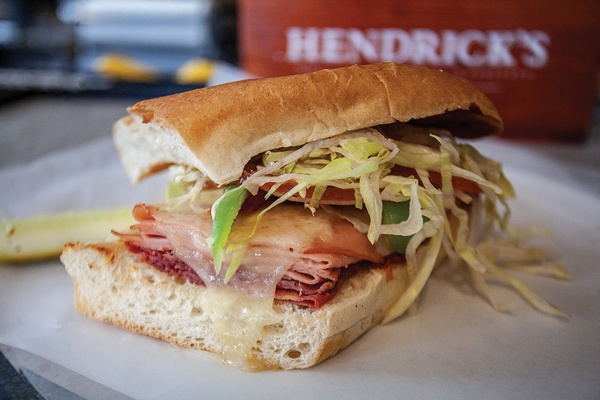 One of the many authentic offerings. The deli also serves beer, wine, cocktails – and sports./Photo by Stephen Eginoire