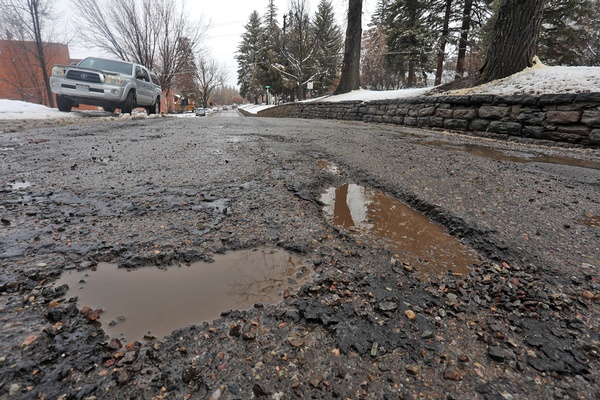 Following the wet winter, the city is faced with even more deep potholes and damaged roadways, like these found along East Third Avenue downtown. The question for voters is how the City should pay to fix these issues./Photo by Stephen Eginoire

With spring comes Durango’s unique opportunity to hold elections outside of the madness and mayhem of November. It’s an opportunity for the community to choose its leaders on the Durango City Council and focus on local issues, like Question 1-A.

In next week’s edition of the Telegraph, we’ll give these candidates a chance to tell our readers a little bit about themselves and how they feel about some of the Council’s most pressing issues.

This week, we’ll shine a light on Question 1-A.

Following a defeat by more than 20 percent in November, the City Council is coming back to voters with a trimmed-down version of its previous request for a tax increase.

This ballot measure, referred to as Question 1-A, is a proposed sales tax increase of .5 percent that sunsets in 10 years. It will be dedicated to the construction, operation and maintenance of streets, sidewalks, alleys, gutters and other roadway needs.

In the first year, it’s expected to raise about $4.7 million. Also included in Question 1-A is the creation of a community advisory board that would be tasked with making recommendations to the City Council on which street projects to prioritize.

Campaigns have sprung up to oppose and support Question 1-A.

Voters will notice lots of numbers littering the literature and social media sites for both campaigns, as well as data offered by the City of Durango. However, not all the numbers match.

As an example, in the official Municipal Election Informational Booklet – which is mailed to all Durango voters – the “Total City Fiscal Year Spending” is listed from 2015- 19. The number for 2019 is $55 million.

Yet, the City Council approved the 2019 budget last December with $92 million in total operating expenditures.

The difference in the numbers is often about enterprise funds and dedicated taxes, which are different from the general fund. An enterprise fund, like the city’s trash and recycling services, pays for itself with fees and other charges. It is considered its own entity, even though it’s under the umbrella of the City of Durango.

Some proponents of Question 1-A have focused on the general fund because this is, currently, the only way to pay for street repair and maintenance. Opponents have highlighted the total budget because it speaks to all of the city’s expenses and services, including police, fire, parks, administration, permitting, trash, recycling, water, sewer and street maintenance.

During a debate over Question 1-A hosted by the La Plata County League of Women Voters on Monday night, former mayor and local business owner Christina Rinderle spoke on behalf of Citizens for Making Durango A#1.

Rinderle said, currently, 37 percent of the city’s streets are in need of immediate repair and it is far more costly to repave a street once it’s beyond repair. She said it could cost more than eight times as much to rebuild a roadway.

“Doing this now is the most cost-effective way,” she explained. “I feel like we’re actually saving the community money.”

Proponents, like Rinderle, have pointed out the sales tax increase would only be adding 50 cents to a purchase of $100, yet have the potential of saving the community millions.

On the other side, longtime resident John Ritchey spoke on behalf of the United for Durango’s future campaign,  which opposes Question 1-A.

Ritchey said the tax increase is not small to many area residents who are struggling to stay afloat in Durango. “Ask the low- and middle-income voters if they think this is a trivial amount of money,” Ritchey said during the debate.

Opponents of Question 1-A believe the answer to funding street projects is not in more taxes. The answer, they say, is in better management of the city’s $92 million budget.

Put it in park

Although the two sides have debated the merits of this particular tax, the most contentious issue isn’t even about Question 1-A.

Following the defeat of the November tax ask, the City hosted listening sessions to find out why the measure went down. One of the suggestions made during those sessions was to ask voters to redirect funds previously dedicated to Parks and Recreation and, instead, spend some of those funds to fix the city’s potholes and streets.

The Council chose not to go that route and moved forward with Question 1-A by a vote of 4-1.

Although the Council decided against asking voters to reauthorize a portion of the taxes dedicated to Parks and Rec, the debate still lingers in the community.

It was a topic addressed during the Monday night debate.

“This means if nothing changes between 1999 and 2039, an astounding total of $324 million will go only to Parks and Recreation.”

Opponents of Question 1-A would like to see the matter put to a vote because although 70 percent of voters approved the Parks and Recreation tax in 2015, they say those voters were not aware of the impending need for streets.

Proponents of Question 1-A, however, have said asking voters to redirect the funds could break their trust. They’ve also pointed out redirecting those taxes could hurt the city’s ability to receive grant funding from organizations like Great Outdoors Colorado.

Rinderle said the city has a positive reputation when it comes to grant applications. If Parks and Recreation taxes were redirected, she feels it could jeopardize that reputation and damage the city’s ability to receive grant funding in the future.

In addition, she explained the Parks and Recreation activities Durango offers – from the Rec Center and library to open space and trails – is something that attracts visitors and businesses to this area.

“We need to be very careful as a community not to take away the golden goose of our Parks and Recreation,” she said.

For a two-minute video on the election process, candidates and issues, check out www.durangogov.org/election.

Vote Yes on 1A campaign

Vote No on 1A campaign

Break out the ballots

Ballots hit the mail this weekend and will be available to pick up in person as of Mon., March 18. Election Day is Tues., April 2. Ballots can be mailed back or dropped off, but all ballots must be received by 7 p.m., April 2. Postmarks do not count.Ballots can be dropped off at the Durango City Clerk’s office (open weekends from 8 a.m.-4 p.m.), the La Plata County Administration Building (with a 24-hour drop box) and the La Plata County Clerk & Recorder’s office (also with a 24-hour drop box).

If you don’t receive your ballot or have any questions, contact the City Clerk’s office at 375-5010.