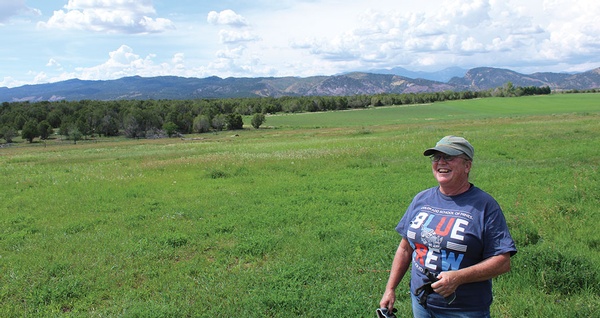 About 180 acres south of Durango, known as the Weaselskin property, owned by Jennifer Thurston, were recently placed in a conservation easement, which protects the land from future development./ Photo by Jonathan Romeo

A year after being passed, a new state law that increases the financial benefits of conservation easements has reinvigorated efforts, at unprecedented rates, of people who want to protect their land from development.

In Colorado, a conservation easement is a voluntary agreement with a property owner in which the owner agrees to limit development on the land for the preservation of scenic views, wildlife habitat and watersheds, among other values that benefit the public. While an agreement to limit development can devalue the full potential of a property, in return, the property receives a tax advantage.

In the past, landowners could receive tax credits up to 50% of the value of the land within the conservation easement. But in recent years, the incentive was not enough and interest waned, said Adrienne Dorsey, executive director of La Plata Open Space Conservancy.

In summer 2021, however, the state legislature passed House Bill 1233 to increase the tax credit up to 90%. The law has led to renewed interest and unprecedented demand for conservation easements. And it could not come at a more important time as development booms across the state, said State Rep. Barbara McLachlan, who voted in favor of the new law.

“This bill forever protects the land,” McLachlan said in an interview with The Durango Telegraph this week. “It’s a good incentive for people who have a ranch and don’t want to sell it and have it turned into condos. Their land will stay a ranch forever.”

One such recent success story is a property known as “Weaselskin,” south of Durango on Florida Mesa, just off Highway 550. For years, the property owner, Jennifer Thurston, tried to get the land placed under a conservation easement, but the 50% tax credit just didn’t make the deal financially feasible. But the passage of HB 1233 pushed the project over the finish line.

Now, 180 acres of farmland and piñon-juniper forest, an area critical for wildlife and home to untold numbers of Native American ruins, is protected under a conservation easement. And, the move is just the first of a multi-phase project to protect the larger Weaselskin property.

“We could have quit or stopped,” Thurston said. “But I said, ‘I will do this.’ Hopefully, we’ll serve as a model to show other property owners conservation easements can happen and not feel like you’re giving away the value of the land in the process.”

In the late 1990s, Colorado started offering conservation easements, recognizing private lands play a vital role in the protection of open space and ecologically important areas, and to promote the heritage of Colorado’s rural landscape. But it wasn’t until the early 2000s that it became more popular as an option for preservation.

The program, it should be noted, has not been without serious issues. According to Colorado Politics, out of 4,000 easements granted from 2000-13, about 20% were rejected years later, because state auditors deemed the lands were of lesser value than originally appraised, forcing landowners to pay back credits and leading to bankruptcies. And, there has been concern over the years that some landowners take advantage of the tax break.

But, for the most part, conservation easements have been a critical tool for protecting private lands that would otherwise be sold off to development. And, for ranchers and farmers, it significantly cuts down on annual operating costs, extending the life of the agricultural operation and making it more feasible to pass down to the next generation.

Conservation easements, too, can take many forms. In 2016, the James Ranch family placed the bulk of its 420-acre property in the Animas Valley into a conservation easement to ensure the property continues to provide local meat and produce. In 2021, more than 700 acres northeast of Durango were conserved, mainly to protect the city of Durango’s water supply. And most recently, a Native American ruin site called Haynie, northeast of Cortez, received the designation.

But the one common (and required) theme to properties that qualify for a conservation easement: they must have some public benefit quality.

In addition to limited tax incentives, interest in conservation easements over the years also waned because of fewer development pressures and the COVID-19 pandemic making it hard to connect with landowners, Dorsey said. But that all changed with HB 1233.

“There has been such a huge uptick in interest because of that increased tax credit,” Dorsey said. “We’ve seen a surge in the number of people reaching out to place easements on their property.”

But it’s not just the tax credit that’s persuading them. More than ever, landowners are feeling a sense of urgency to protect open space amid the influx of people moving to Colorado and extreme development pressures in the wake of the pandemic. James Reimann, conservation director for Montezuma Land Conservancy, which covers Dolores, Montezuma and western San Miguel counties, said he’s received six calls in just the past two weeks.

“We’re hearing from people who in the past were interested in conservation easements, but it didn’t pencil out,” Reimann said this week. “But now they’re calling back and asking about the 90% tax credit, which is helping these projects move across the finish line.”

Much like in La Plata County, Reimann said landowners in his region want to protect their farms or ranches from development. Some hope to pass the land onto their children or the next generation. Others simply want to conserve the landscape for views or wildlife habitat.

“Just looking at how the world is changing, it provides peace of mind when their land is protected for the future,” Reimann said.

Peace of mind is exactly what Thurston wanted for Weaselskin. Thurston’s family has owned an 800-acre swath of land atop Florida Mesa since the 1970s. Ever since, the landscape has remained largely unchanged, dedicated to agriculture and open space, and home to a vast network of archaeological sites.

About 10 years ago, Thurston first approached LPOSC but was ultimately unable to make it work financially until this past year, when the tax credit increased. Although 180 aces are now in an easement, Thurston hopes to eventually conserve 700-800 acres (though she admits that’s going to take some wrangling with family).

In the meantime, Weaselskin continues its sod farm and hay production, as well as pasture for horses. Thurston said she’d like to start permaculture and offer organic food. Also, just as important, is having a public outreach and education component (though conservation easement properties are not open to the public).

This past spring, Thurston hosted a group of Animas High students for a three-day course. At the beginning, when asked what would be the best use of the property, the students said they’d like to see a strip mall or golf course. But, after a few days working and connecting with the land, the students realized why saving the property from development was so important.

“It changed their mind,” she said.

As for LPOSC, Dorsey, who took over the reins as executive director in January, said with the new tax credit, some big projects are coming down the line. “We have some really exciting projects in the works right now,” she said. “As long as there’s a strong interest, we’ll continue to increase our efforts in strategic, impactful areas to conserve these lands.”