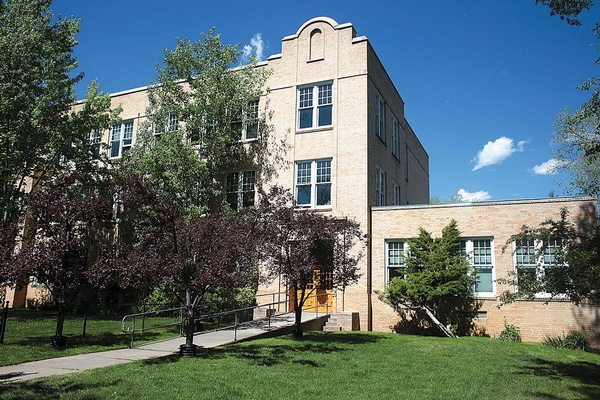 The Smiley Building today. The old junior high was in disrepair when the Shaws bought it in 1997./ Photo by Jennaye Derge

In December 1997, Charles Shaw was reading the morning paper when an article caught his eye about the ole 9-R junior high school building on E. Third Avenue. The 45,000-square-foot mellow-yellow brick edifice was for sale, and the offers seemed too low to be true. Charles nudged his brother, John, and the two went for a walk through the cavernous structure. It was love at first sight.

Built in 1936, the former city-owned property oozed history and sparked imagination. West-facing windows framed the La Plata Mountains in the distance, while the rest of the nearly 300 windows flooded with natural light. From nooks and crannies to a gymnasium and theatre, the Smiley Building had all the spokes of a future hub for community in downtown Durango.

A plumber and jack-of-all-tradesman, Charles had just finished rebuilding a dance school on Florida Road for his wife, Lisa. When he called Lisa to tell her about the prospective new studio space, it didn’t take long for the dancer to see the vision unfolding in her husband’s mind. Despite public skepticism, the trio of entrepreneurs bought the Smiley Building for $427,000.

After the papers were signed, they embarked on a seemingly endless journey to turn the run-down beast into one of the greenest, most efficient places in town. With the assistance of restoration grants from the Colorado Historical Society, the renovations began.

Re-roofing. Reconditioning of the maple floors. Painting. Installation of new electrical, plumbing and heating systems. More painting. Rotting window frames were replaced. Replicas of the original oak doors were built in the basement, which quickly morphed into Charles’ workshop and the birthplace of a gazillion projects to come.

With the bones of the building intact, the debut tenants moved in three months after the purchase date. Charles turned his attention to his first passion: making the space as sustainable as possible. While he held a degree in Environmental Studies from UC Santa Barbara, he had no specific training in energy efficiency, much less installing solar panels.

Nevertheless, he and John proceeded to build the region’s first and largest photovoltaic system. The project was such a success that John would go on to found Shaw Solar, selling his portion of the Smiley Building to Charles and Lisa in 2005.

Beyond supplying the entire building’s electrical needs, the solar panels produce a surplus of energy, feeding clean
power back into the local grid. Energy-efficient retrofits also include LED lighting, ground-sourced pumps for heating and cooling, and, eventually, stations

Nowadays, the Smiley is next-to-zero net carbon. While better for the planet, these energy savings also reflect in Charles’ pocketbook, reducing utility costs from $5,000 per month to less than $100 per month. Lower energy costs
mean lower lease rates for the 50 starving artists, nonprofit directors and optimistic entrepreneurs who work at the Smiley.

From ice cream to solar power, lactation classes to yoga sutras, the Smiley also offers something life-changing for struggling hopefuls: opportunity. Ask any tenant at the buzzing community center, and they’ll happily recount their Smiley story. Some might even be moved to tears as they recount the time Charles took a chance on their dream. Twenty-six-year-old Vivienne Yeagy is one of those hopefuls.

As one of four sisters homeschooled in Indiana, Yeagy was raised to take care of whomever was smaller than her, so she babysat while earning her degree in education at Fort Lewis College. One of her clients was Sarah Shaw (John and Charles’ sister), who encouraged Yeagy to grow her babysitting services into a bona fide business.

In 2012, 20-year-old Yeagy asked Charles if she could rent a picnic table from him in the Smiley Building’s lobby to use as her babysitting basecamp. At the Smiley, Yeagy had everything she needed: a beautiful back yard, a water source, bathrooms, shelter. The picnic table would be a central place for parents to drop off and pick up their kids. Charles said she couldn’t rent it, but she could use it for free.

The picnic table inspired Yeagy to establish her business, the Nifty Nanny. A nanny, says Yeagy proudly, is someone who is not just supervising but providing extracurricular enrichment for children. Think Mary Poppins. Much like Poppins, Yeagy’s programs are whimsical and, er, nifty, with art projects, science experiments, nature walks, bike rides and story time.

Prompted by parents, Yeagy expanded to year-round programs. She spent two years based at the picnic table and then asked Charles if she could rent a closet. After outgrowing the closet, she approached Charles again –this time, about renting a room.

“He just looked at me and said, ‘It’s going to be a lot more than what you’re paying for the closet,’ and I just told him, ‘It feels like what I’m supposed to do with my life. I won’t know unless I give it a shot.’”

The risky move paid off, and the Nifty Nanny blossomed. In November 2016, Yeagy moved into Room 201, which parents filled with donated classroom items. The Smiley, named after the late Durango School District Superintendent Emory E. Smiley, had ceased being a school in 1994. Yet Yeagy’s Nifty Nanny, along with the previous intro of Durango Montessori in 2005, has spawned an educational revival.

But the Nifty Nanny shuffle of musical chairs wasn’t done yet (a common theme for Smiley Building tenants). In March 2018, Yeagy moved to a coveted first floor room replete with comfy chairs, a little library, hooks for little coats and – bonus – the smell of brownies, thanks to its prime location next to the Smiley Cafe.

The magician behind those brownies is yet another entrepreneur. In April 2016, Carrie Hladik partnered with her friend, Franci Stagi, to buy the Smiley Cafe. While Hladik worked her nine-to-five desk job during the day, Stagi ran the cafe. At night, Hladik baked brownies, scones, quiches, muffins and other heavenly bites.

“The secret recipe is the building and what Charles and Lisa have created here,” says Hladik. “They are the most gifted, generous, intentionally moving, living people I’ve ever met. It’s not about them. It’s about what they’re doing.”

Rather than Charles splashing the Shaw name all over the building, tenants like Hladik comment on how they’ve heard him tell people he’s the custodian – a claim that’s not too far from the truth. While Charles says he loves all the jobs he commissions himself to do at the Smiley, his current favorite task is trimming the trees he planted 20 years ago.

Those trees have helped turn the once-barren grounds surrounding the Smiley into a verdant oasis sought by birds and brides alike. Fifteen years ago, Jimbo Buickerood, of the San Juan Citizens Alliance, performed his first wedding on that very lawn before these trees grew to their present-day majesty.

Jimbo’s been a tenant in the Smiley for five years. He rattles off precious Smiley anecdotes, like that time tenants decorated a coffin built in Charles’ shop for beloved Smiley-based artist, Karen Pittman, who passed away a few years ago. Or about a piece of clothing that’s been hanging in an undisclosed location for more than two years.

“Whoever’s garment it is, if they remembered where it was or happened to go past it at some time, it would still be there, waiting for the return of its owner,” he says mysteriously. For anyone who questions the coolness or value behind why it’s still there, Jimbo retorts: “Anyone who enters the building gets blessed by the honesty fairy.”

Like all good stories, the Smiley’s is never-ending, and the noble duty to collect these treasures has fallen to Drew Semel, owner of IlluminArts media production. Based in the Smiley since 2016, Semel was hired by Charles a month ago to put together a Smiley documentary. While Semel would normally spend four months on such a lofty project, he’ll have four weeks total to compile the colorful narrative.

Semel and his crew, including two Animas High School interns, have been running around the building, unearthing history and pure community passion. They’ve scoured yearbooks stashed in a musty vault at the 9-R Admin Building next door and sat down with former Smiley students, like 50-something Jack Turner and his 90-something father, Rod. The documentary premiers at the Smiley’s 20th anniversary soiree May 31.

With such a gigantic story to tell, Semel is fueled by the expressions of gratitude he hears from the Smiley community – not just about the creative energy or spontaneous sounds of a concert pianist playing in the cafe – but of Charles in Charge, dancing Lisa and their smiling son, Raleigh, who’s grown up here. Because, in the end, it’s not about the real estate or even the solar power.

“It’s the people doing their thing and connecting with each other that makes it special for me,” says Charles. “I’m not sure why it all works, but it does.” 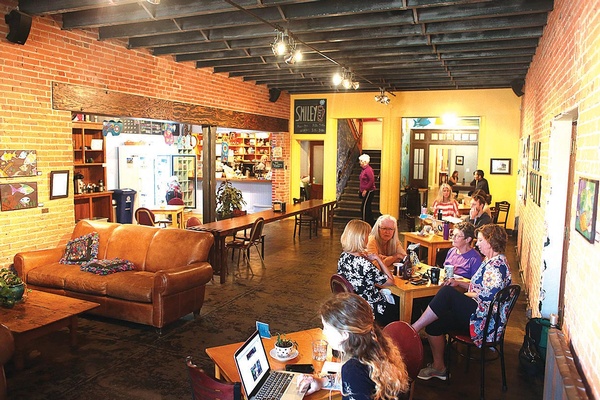 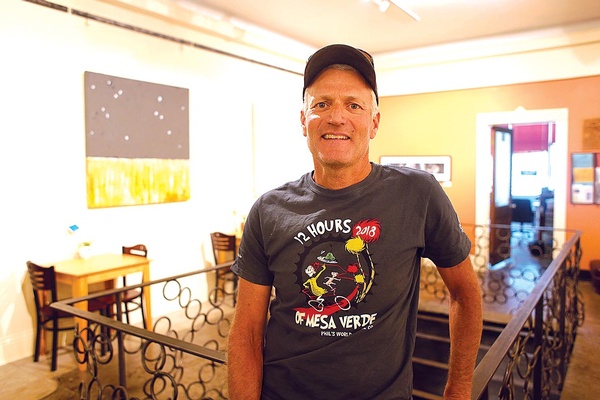 Above: Charles Shaw in the next-to-zero net carbon building.