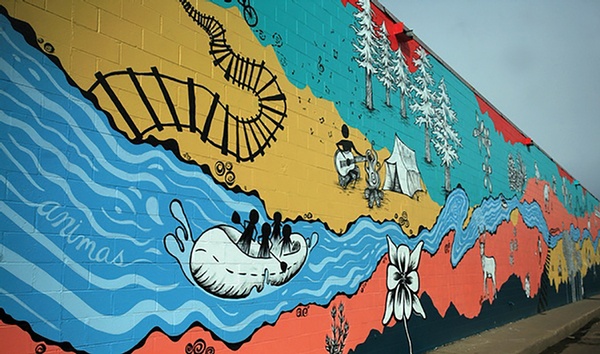 Will it or won’t it? And if it does, when and how much? Inquiring boaters can have all their burning questions answered – or at least get good guesstimates next week. The Bureau of Reclamation will host its 2019 operations meeting for the Dolores River at 7 p.m., Thurs., April 18, at the Dolores Community Center, 400 Riverside Ave.

“This meeting is a great opportunity for our partners and the public to find out how the 2019 water year is shaping up and to have any related questions answered,” Western Colorado Area Office Manager Ed Warner said.

Meeting topics will include a review of 2018 operations, projected water supplies and runoff for 2019, and the forecasted possibility of a boatable release on the Dolores below McPhee.

The meeting will also include presentations and representation from several agencies, including: Reclamation, Bureau of Land Management, Forest Service, Dolores Water Conservancy District, Colorado Parks and Wildlife, Dolores River Boating Advocates, American Whitewater and Fort Lewis College. There will be opportunities for questions, comments, and discussion during the meeting.

It’s hard to miss Kroeger Hardware’s new colorful backside. And next Wednesday, you’ll be able to meet the artists responsible for this downtown beautification project as well as those who made it happen. Local First, which implemented the project, will be hosting a mural celebration party from 5 – 6 p.m., Wed., April 17, at the mural in Town Plaza.

The project was made possible by a grant from the City of Durango’s “Durango Creates!” program. It was created by local artists Hayley Kirkman, Lexis Loeb and Matthew French-Holt, with the help of more than 30 community volunteers. The scene, depicting a colorful outdoors scene in Southwestern hues, was completed in November 2018.

Kroeger’s Hardware wholeheartedly supported the project; spiffing up the wall was something the store had been considering on its own.

“After looking at our blank wall from main street, we decided it was time for something new. It gave the wrong impression of how Durango should be represented to our visitors,” Kroeger’s spokesman Joel Krueger said. “The timing of Local First approaching us to use the wall as a canvas was perfect. We were extremely happy to support them, and they did an outstanding job. The mural adds so much to the appearance of downtown Durango.”

The mural is part of Local First’s Creative Arts Initiative to connect Local First members with artists to enhance the local creative economy, provide living wages to artists and enhance Durango’s surroundings. Another mural was also  done last year on the wall of Durango Joes on College Drive.

In addition to turning a blank brick wall into a work of art, the Town Plaza mural also resulted in another serendipity. Near the end of the project, lead artist French-Holt went from muralist to newfound owner of the nearby Art Supply House (which also sponsored the project).

“Public art projects serve as a tangible, visible sign of the community attitude toward art, innovation and differing points of view,” French-Holt said. “We knew this mural would benefit the visitors who get to see it, and those of us who live here and experience it on a daily basis. Now that the mural is completed, I go out of my way to see it – seeing the color coming down 10th Street brings a smile to my face.”

Katie Burford, owner of Cream Bean Berry, which neighbors the project and also sponsored it, said she appreciates what the mural brings to downtown.

“Literal trainloads of people pass through the Narrow Gauge corridor each day in the summer, and it’s easy for us locals to forget what our city looks like from their perspective,” she said. “How sad it was for them only to see dumpsters, parked cars and loading docks. The artists who conceived of this project had a real stroke of genius when they realized the potential in the hardware store’s expansive back wall. I’m grateful for the wildly creative artists who made it and for the wild, natural beauty that inspires them.”

Taking the mural idea one step further, in the last year Local First has spearheaded an effort to designate Durango as a Colorado Creative District. It is hoped the certification will bring greater economic diversity to the area and open up statewide marketing opportunities.

Other sponsors of the mural include Town Plaza merchants and the Durango Silverton Narrow Gauge Railroad.