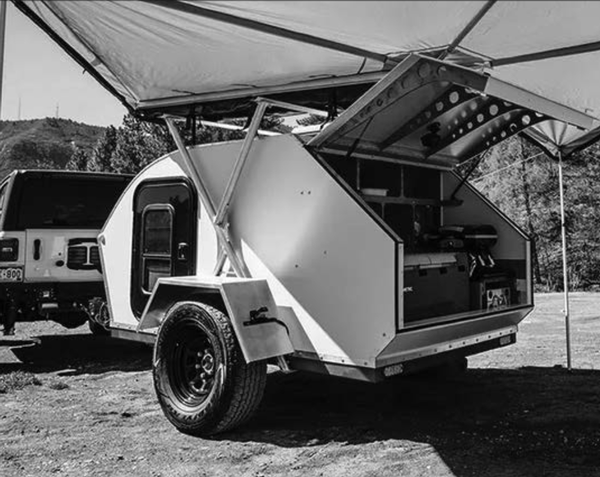 One of Moto Burley's custom teardrop trailers that will be the envy of the camperhood. The business, located on Highway 3, is among the SCAPE startups that will be showcased Sept. 10 at FLC.

It’s time for Durango to meet the new crop – of entrepreneurs that is. On Tues., Sept. 10, the Southwest Colorado Accelerator Program for Entrepreneurs (aka SCAPE) will be hosting its annual startup showcase and investor social from 4 – 7 p.m. in the Fort Lewis College Ballroom.

During the event, six new local startups will highlight their businesses for the curious and/or prospective investors. The startups include:

• Agile Space Industries – Developer and manufacturer of state-of-the-art propulsion systems for NASA, the U.S. government and the commercial space industry.

• Expedition Outside – An online marketplace for outdoor enthusiasts, professional guides and private landowners to list, discover and book opportunities for recreational activities on private lands within the United States.

• Versa Joint – A patented device that improves the performance and design of water-powered cleaning tools.

In addition to the startup showcase, the event will also feature keynote speaker Erin Neer, CEO of MUNIRevs. Neer, a certified public accountant, launched MUNIRevs through SCAPE in 2011. The online system helps businesses remit and municipalities collect tax revenues from online sales and booking sites, such as Airbnb.

SCAPE started in 2013 as a way to drive economic development in the region by offering mentorship and startup funds for aspiring new businesses. In that time, it has helped launch 31 companies, raised $19.5 million in capital and added 92 jobs to the area’s economy.

For more information, go to www.goscape.org.

After more than 10 years on the drawing table, changes to the Hermosa Creek Special Management and Wilderness areas are starting to hit the ground.

Earlier this month, nearly 40 road signs were installed in the Hermosa Park vicinity, denoting which roads are open and which are closed to motorized or mechanized use. Over the years, driving vehicles or bikes off road for dispersed camping was permitted along the Hermosa Park Road (Forest Road 578.) However, as per the new travel management plan, adopted in 2018, such off-roading is no longer allowed in an effort to protect the watershed.

But this doesn’t necessarily mean folks now will have to hoof it into their former favorite car-camping spots. Many of the traditional camping spurs in the area were grandfathered into the plan as official roads and can still be used by vehicles.

According to the Columbine Ranger District of the San Juan National Forest, the signage is just the beginning of the implementation of the area’s new rules. The plan places stringent wilderness protections on 37,000 acres in the western Hermosa drainage (Hermosa Creek Wilderness Area) and less-restrictive rules on 71,000 acres in the eastern part (the Special Management Area), including a ban on new roads, mining, drilling or commercial logging. Although no vehicles or bikes are allowed in the wilderness area, they are allowed on designated routes within the SMA.

Protecting the Hermosa watershed from development has been more than a decade in the works, with local stakeholders first meeting to discuss the topic in 2006. From there, a collaborative community process ensued, which ultimately recommended legislative action to protect Hermosa Creek and its environs. Lawmakers took note, and after several years of drafts, the Hermosa Creek Watershed Protection Act was signed into law in December 2014.

To view the plan and its use maps, go to www.fs. usda.gov/sanjuanand click on “Hermosa Creek Watershed Information.”