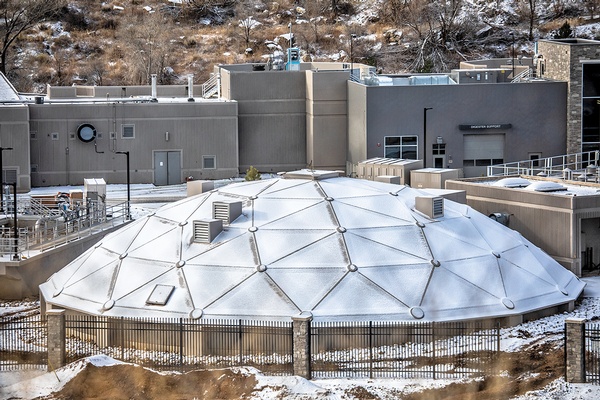 Local residents can now flush freely. The City's new wastewater treatment plant is officially up and running. An open house and ribbon-cutting will be held Wed., Dec. 4. There will also be tours on a first-come-first-served basis for those so inclined. /Photo by Stephen Eginoire

Sewer plant gets down to business

It’s time for Durango to take the sniff test. The City’s new wastewater treatment facility is officially open for business, if you’ll pardon the pun. Residents are invited to check out the City of Durango’s new Santa Rita Water Reclamation Facility on Wed., December 4, starting at 12 noon. The day’s events will include a ribbon-cutting followed by speeches from local dignitaries and members of the design and construction teams. After the ceremony, tours of the new facility will be available on a first-come-first-served basis. Lucky attendees can also grab commemorative Santa Rita Reclamation Facility coffee mugs while supplies last.

The nearly $59 million facility was the most expensive public-funded project in the City of Durango’s history. Construction began in the spring of 2017 after Durango voters OK’ed the City to take on $68 million in debt in 2015 for the project. The new plant was needed in order to meet more stringent state standards requiring lower levels of phosphorous and nitrogen in treated wastewater, pollutants that can lead to algae blooms.

The new state-of-the-art building is expected to serve the city for at least the next 30 years and was built to ensure compliance with regulatory requirements, accommodate future growth and protect the quality of the Animas River. And, hopefully, reduce untoward odors with the use of larger, covered settling ponds and carbon air filters.

The project was originally slated for completion last May, but that date was postponed until the end of October. Durango City Council has raised sewer rates in recent years to pay for the new plant, with the average city resident now paying $51.43 per month. Rates may go up yet again, with the City Council recently giving tentative approval to a 3 percent increase in sewer rates.

Locals are advised to get their last kicks on some of the area’s trail by Sat., Nov. 30, if the snow doesn’t get to them first. Colorado Parks and Wildlife has announced its annual winter wildlife closures will go into effect Dec. 1 – April 15, 2020. The closures, which are primarily on BLM and CPW lands, are meant to protect vulnerable big game herds during the precarious winter months.

“Winter is a tough time for big-game in this area,” Matt Thorpe, area wildlife manager for CPW, said. “They migrate to lower elevations, and it’s important that we don’t disturb and stress them with our outdoor activities. If they are forced to move to avoid you or your dog, they burn calories unnecessarily. And they need every spare calorie to make it through the winter and to give birth to healthy fawns and calves in the spring.”

• Bodo State Wildlife Area (Smelter Mountain Trail is open to foot-access only from 10 a.m. - 2 p.m. but dogs are prohibited);
• Perins Peak State Wildlife Area (areas east of La Plata County Road 208, near the Tech Center, are closed through July 31);
• Big Canyon and Sale Barn trails;
• South Rim Trail, including portions of Sidewinder and Cowboy trails on BLM property accessed from Carbon Junction or Crites Connection;
• Grandview BLM trails accessed from Three Springs;
• Animas City Mountain upper loop trails;
• Twin Buttes upper trails
Public access into those areas is prohibited during the closure (and all closures will be well marked with signs, so no excuses.)  Those caught in violation will be issued citations and fines.

The CPW notes there are plenty of other local trails that remain open during the winter, including Horse Gulch proper, the Mountain Park and lower loop of Animas City Mountain. Or, better yet, the trails at the ski area.

Governor Jared Polis is mapping out a plan to help Coloradans thrive “no matter where they live.” On Fri., Nov. 22, Polis released his “Rural Economic Blueprint” in Montrose to an audience that included local, regional and state dignitaries, including members of his cabinet and Sen. Don Coram, R-Montrose.

The plan outlines ways to address concerns and challenges in rural communities, including high health-care costs, renewable energy and transitioning away from coal, road and bridge repair, broadband connectivity and diversifying local economies.

“I ran on ensuring a Colorado for all, where everyone in our state has the opportunity to thrive,” Polis said. “We are excited to unveil our rural economic blueprint, which we believe will lead to more prosperity all across our state from the Eastern Plains to Southern Colorado to the Western Slope. With true collaboration between rural communities and the state, we can truly build a Colorado for all.”

Polis also highlighted his successes thus far, including a plan to lower the cost of health care in rural areas and providing free, full-day kindergarten.

Although the plan does not include any major new funding or programs, he noted it will be accomplished by leveraging existing assets, programs and efforts.

The plan was based on more than 155 meetings and listening sessions held throughout the state.

“I’m proud to welcome Governor Polis back to Montrose,” Barbara Bynum, Montrose Mayor Pro-Tem, said. “It’s fitting that the Governor would make this important announcement in our community where we are innovating, investing in our future, ensuring our outdoor economy continues to thrive and our rural quality of life is protected.”

For areas losing population, he said the answer could lie in “location independent employment,” such as call centers or telecommuting opportunities.