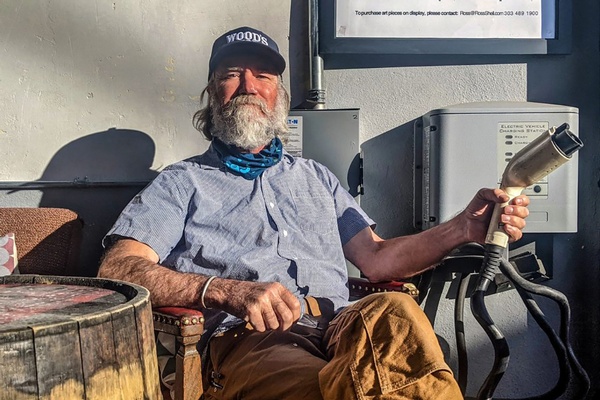 bIt started with an email between PT Wood, the Mayor of Salida, and electric car startup Rivian.

To power its soon-to-be-released electric truck and SUV on long trips, Rivian announced plans to build an “Adventure Network” of 3,500 fast charging stations across the U.S. and Canada. Cody Thornton, the Rivian employee, told Wood the company hoped to build one of the first hookups in the town at no cost to taxpayers.

The mayor only found one reason for hesitation. Only Rivian owners could use the Rivian chargers. Built-in software would refuse any other type of electric car, which Wood worried could confuse drivers hoping to recharge in Salida. “If you can only charge at certain places, it divides the world up in a pretty awkward, inefficient way,” he said. “A pretty unequal way, too.”

Rivian declined requests for comment or interviews but detailed its plans for the Salida charging station in a public meeting before the city council. The plan also put Wood at the center of a growing question over electric car chargers: As the U.S. rapidly expands electric car hookups, should there be a single plug for every vehicle?

A traditional gasoline vehicle can refuel at almost any gas station in the country. While most drivers barely notice the convenience, the standardization required decades of industry cooperation and government regulation over the 20th century.

Meanwhile, electric cars face a landscape similar to smartphones. Tesla essentially fills the role of Apple. The electric transportation pioneer has built an extensive network of faster chargers with proprietary plugs exclusive to its own vehicles.  Most other models have at least the options for something like a USB plug for an Android phone. Other manufacturers build their cars with a standard known as the Combined Charging System.

While he doesn’t drive an electric car himself, Wood has long seen car chargers as a way for Salida to help combat climate change and put itself on the map for tourists. Even though the city has plenty of mountain bike trails and river options, it’s about two hours from any major interstate.

“We’re a little off the beaten path, so providing the ability to charge your EV allows for folks to come here and experience our little piece of paradise,” he said.

The strategy has worked for Wood as a business owner. In 2013, he installed a charger just inside Wood’s High Mountain Distillery, a watering hole he owns on the edge of downtown. At the time, Wood said it was the only free, public charger anywhere in central Colorado. Drivers started plugging in daily and buying whole cases of spirits in exchange.

“It was wild,” Wood said. “One of the better marketing things I’ve ever done.”

He expanded on the strategy after winning the mayor’s office in 2017. With the help of a state grant, the city installed three charging stations scattered around the town center. These plug-ins also offer free electricity through a standard plug, but at a slower speed than the Rivian fast chargers. Wood said the economic return easily covers the cost of the electricity.

Those experiences were a big reason he pushed back against Rivian’s plans to build an exclusive charging network. If only certain people could use the chargers, only certain people would visit Salida. In his ideal world, there would be a universal standard for car chargers, ensuring every plug fit every car.

Not all experts share that desire. Chris Nelder, who studies electric car infrastructure for the Rocky Mountain Institute, said most electric car models can easily handle the vast majority of daily car trips in the U.S. That means most drivers will rarely need public chargers if they have a dedicated plug and parking spot at home.

Nevertheless, Nelder said many drivers want to be able to recharge on longer trips, which means public fast chargers could help ease consumer anxiety and accelerate the switch to electric vehicles.

“We just need more public chargers,” Nelder said. “The more that people see public, especially high-speed, chargers out there, the more comfortable they’re going to be with buying EV.”

Nelder added the strategy clearly worked for Tesla, which built its fast-charger network to reassure potential customers. He doesn’t see any reason why Rivian shouldn’t be allowed to do the same.

“This is a private enterprise, baby,” Nelder said.

Not all chargers are funded by private companies, though. President Joe Biden’s proposed infrastructure package calls for $174 billion to accelerate the transition to electric vehicles including grants to build 500,000 new charging stations across the country. Nelder said any public money should go to stations with standardized plugs.

“We don’t think the public should fund projects the public can’t use,” he said.

In the end, Mayor Wood was able to work out a deal with Rivian. The company agreed to install four exclusive fast chargers and four slower chargers open to the general public (like the chargers the company plans to build in all Colorado state parks). The lease between the City of Salida and Rivian can be renegotiated after a decade. At that point, Wood said the community could push Rivian to unlock all its chargers. “I think that’s fair because that gives them time to recoup their investment,” Wood said.

Opening up the chargers could be straightforward. In a city council meeting, Cody Thornton, the representative for Rivian, confirmed the fast-charge plugs would fit all vehicles using the CCS standard. Wood asked if simple software could make the chargers accessible to other cars.

While it was a small admission, Wood said it’s important to plan ahead as the climate warms. In recent years, wildfires have threatened Salida and drought has shrunk the rapids in the Arkansas River. As Wood sees it, pushing Rivian was one way his city could do something.

“It fit in with our ethos and let us put our money where our mouth is,” he said.