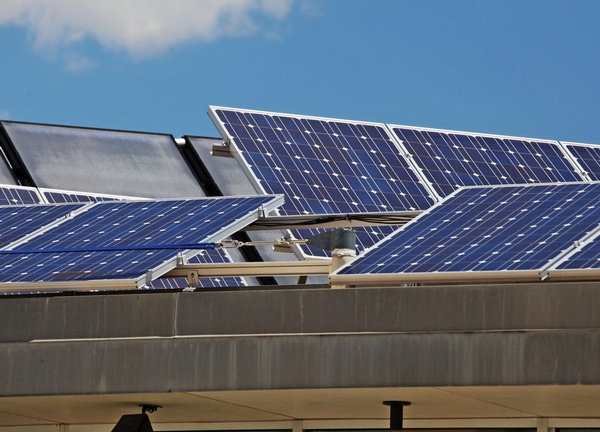 A majority of solar panels in the area serve to offset energy use for businesses and homes, like this array atop the Student Union Building at Fort Lewis College. LPEA's new grant program – now open for applicants – would do the same for local nonprofits, helping them to lower electric bills./Photo by Steve Eginoire

All the bickering was just too much talk for one member. With an ever-changing energy landscape and very different ideas on how to tackle it, the Board of Directors for La Plata Electric Association began to get a disagreeable reputation.

As discussions got more and more heated, an attempt was made to calm the storm by creating a new group. A group tasked with taking the long view and looking at the future of power.

Called the Long-term Strategies Committee, the group of four directors – Bob Lynch, Britt Bassett, Guinn Unger and Dan Huntington – finished their fact-finding mission recently and returned to the full board with a presentation in June.

According to the committee members, they learned a lot about the specific subjects they were tasked with researching.

Huntington, who served as the committee’s chair, said, “We need to be agile and able to change. It’s a fast-changing industry with new technologies and electronics ... we’ve got to be resilient.”

Bassett said although he didn’t think minds were changed, he was happy with the outcome.

Still, the committee’s work did not – nor was it intended to – produce any specific policy changes. With some members of the community pushing for LPEA to increase the amount of local renewable energy it produces, it seemed like just talk.

“The bottom line is too much talking is going on and all the while time is going by,” Jeff Bork, retired telecom lawyer and LPEA coop member, said Wednesday. “Someone had to step forward and get something going.”

So, Bork decided to reach out to companies who could fill the local need for renewable energy.

The first company he approached seemed interested but was slow to respond. Bork then reached out to CalCom Energy, a California-based company with offices in Durango.

One of CalCom’s founders is Durango resident and LPEA board member, Britt Bassett. He was also one of four directors who served on the Long-term Strategies Committee.

Because of Bassett’s connection to CalCom, he acknowledged a potential conflict of interest and stepped away from decision-making on the issue during the board’s June meeting. However, concerns were raised by several coop members during their regular meeting Wednesday about Bassett and CalCom, some even suggesting Bassett step away from his position as a director altogether.

In response to the questions raised, Bork sent an email to the Telegraph clarifying his attempts to reach out to CalCom.

“I alone decided to contact CalCom,” Bork said in the email. “I did not tell anyone at LPEA – whether an employee or a board member (including Britt [Bassett]) – about this contact.”

The proposal from CalCom is to build several 3.5-10 megawatt solar projects – with at least one in each of the school districts and counties in LPEA’s service territory – over the next three years. Together these systems would add 35 megawatts to the coop’s energy portfolio, and they include an energy-storage component.

Bassett’s connection to CalCom isn’t just a concern because of competition with other solar companies or the nuance of negotiations, but the impact it could have on CalCom’s ability to be what’s called a qualifying facility.

In the 1970s, when the oil crisis left Americans fighting over the last drop of gasoline at the pump, Congress stepped in and passed the Public Utility Regulatory Policies Act, or PURPA. This law was intended to encourage energy conservation, efficiency and the development of renewable resources. One way the law did this was to create “qualified facility” status, which allowed certain smaller power producers to get special rate and regulatory treatment.

Today, this has translated into a way for coops like LPEA to increase their renewable energy portfolio without violating the contract they have with Tri-State Transmission and Generation, their wholesale energy provider.

LPEA’s contract with Tri-State limits the amount of renewable energy it can get to just 5 percent of its total. The other 95 percent has to come from Tri-State.

The window for qualified facilities opened when the Federal Energy Regulatory Commission, or FERC, ruled in a case between Tri-State and another one of its coop members, Delta-Montrose. In that case, Delta-Montrose wanted to work with a small hydroelectric power producer in its area but was limited by the same 5 percent cap. So they asked the federal agency to give the producer qualified facility status – and they did.

In response, Tri-State created a new policy to get its lost revenues back, but FERC also said no to that idea. Tri-State appealed the agency’s decision, but it’s not known when FERC will take up the case.

Delta-Montrose hailed the decision as a win, and word was out to other co-ops, including LPEA, that they too could expand their renewable energy portfolios by tapping qualifying facilities.

One of the keys to this loophole, however, is that LPEA can’t seek out qualified facilities. They have to wait for the companies to come to them. That’s why Bassett couldn’t reach out to CalCom.

LPEA’s manager of engineering and member services, Ron Meier, said on Tuesday that the coop was approached out of the blue by three different companies looking to build solar projects. It was announced Wednesday that CalCom was one of those companies.

The fact that Tri-State’s appeal is still out there does leave some risk on the table for qualified facilities and the coops they contract with. But it’s all part of the negotiations – who’s going to take the risk if something were to change?

“That’s one of the challenges of any of this happening,” Meier explained.

“It’s the beginning of the process,” Meier said, “but we’re hopeful.”

The door is open for local nonprofits needing a little help with renewable energy aspirations.

La Plata Electric Association is accepting applications for its Renewable Generation Funds Grants Program now through Nov. 1. The program isn’t actually new. Rather, it’s an updated version of a long-standing one used in the past to help install solar panels on schools and low-income housing units.

With more and more people knocking on LPEA’s door, however, the coop decided to make some changes and help out local nonprofits along the way.

This latest evolution of the program is open to nonprofit or-anizations that are LPEA coop members in good standing. The idea is to help with the cost and installation of renewable energy projects that would help the nonprofits with future energy costs. The projects can be big or small – or something in between. The coop has $40,000 to use for the program, so the amount of the grant awarded could be anywhere from $5,000 to $40,000, depending on how many nonprofits apply and how applications are approved. Preference will be given to applicants who’ve secured additional funding for the project.

Dan Harms, manager of rates, technology and energy policy at LPEA, suggested in a press release that applicants “define the project.” Examples included solar panels for a homeless shelter, church or even kennels to keep rescue dogs warm in winter.

Although the proposed projects should be specific, Harms said the coop is willing to work with organizations to help tweak plans or iron out details.

“Community-based is important to us,” Harms said. “We’re really looking for the candidate who in turn helps other people in the community.”

Decisions are likely to be announced in December and funding can go out as early as January. Local nonprofits interested in applying can get the application online at www.lpea.coop. For more information, contact the coop at 382-3505 or email jbennett@lpea.coop.

Each member of LPEA’s Long-term Strategies Committee was given a different aspect of the industry to research – like future power needs, electric vehicles, energy storage and the open marketplace for electricity. “It’s very simple looking in,” Committee Chairman Dan Huntington said of the industry. “But you get involved on the inside and it’s very complicated.” Take the open market for energy, as an example. Much like traders on Wall Street, power brokers buy and sell electricity on an open market. The City of Aztec and Kit Carson Electric Cooperative in Taos, N.M., tapped a company called Guzman Energy to be their brokers and supplement their power needs by purchasing it on the open market, instead of signing a long-term contract with a wholesale provider like Tri-State Generation and Transmission. In theory, it’s a simple concept – those with extra power sell it in an open marketplace to those who need it. But, the reality of actually getting the electricity from a solar panel in the New Mexico desert to a home in Colorado is no simple task. Transmission gaps, limits on capacity and lack of storage are just a few details that affect pricing and probability. It’s by no means impossible, though. The open market for energy is a common and decades-old practice on the East Coast, and is quickly becoming so in the West. To find out more and read the committee’s presentation, go to www.lpea.coop and check out the Long-term Strategies Committee.