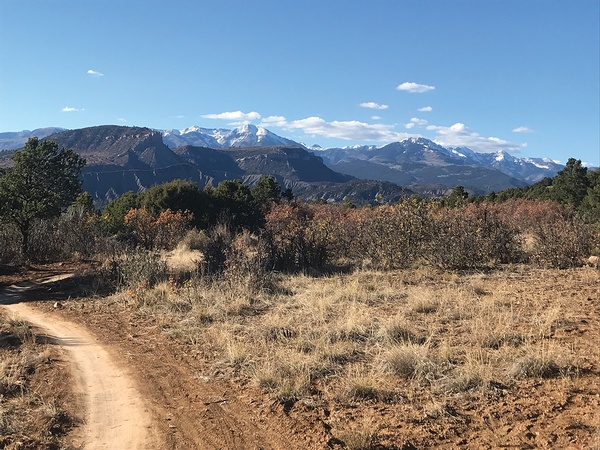 The expansive view from Durango Mesa takes in Perins Peak and the La Platas. Ownership of the 1,850-acre parcel was conveyed in 2019 from the Katz family to the nonprofit Durango Mesa Park Foundation, which announced a $5 million investment in creating a new bike park and training venue./Courtesy photo

Missy Votel - 04/08/2021
Hold onto your handlebars – it looks like Durango is upping its cycling game. The region is now $5 million closer to realizing its dream of a world-class bike park with the help of the Durango Mesa Park Foundation. The nonprofit foundation announced the investment last week, saying it will go toward beginning the necessary infrastructure, design, planning and construction of what it says will be Colorado’s largest, most comprehensive bike park.
The bike park would be located on the 1,850-acre Durango Mesa, southeast of town. Formerly known as Ewing Mesa, the parcel was bought for $14 million by Mercury Payments founder Mark Katz in 2015. The intention was to gift the land to the community for arts, cultural, educational and recreational uses. In 2019, Katz conveyed ownership of the land to the Durango Mesa Park Foundation, which laid out its vision for the bike park last Wednesday.
Plans include “intentionally built” trails and features meant to attract events to the region while also enhancing options for locals. Features would include:
- Progressive, flow and pump track features
- Specific-use trails for hiking, running, mountain biking, e-bikes and entry-level riders
- Specific trail for the Colorado High School Cycling League State Championships
- Covered BMX track
- Running venue to host events, training and races
- High-altitude Olympic-level training facility
- Adaptive sports facility and bike features
- National and World Cup cycling venue for training and racing
- Trails for hosting Union Cycliste Internationale (UCI) sanctioned e-bike racing
The hope, according to the Foundation’s Board of Directors, is to put Durango back on the international cycling map while offering an asset to the community. “Having trails and features that are designed and constructed in partnership with race promoters will give us a huge advantage in attracting events that will positively impact the community and establish Durango and La Plata County as a world-class racing and training destination,” Foundation board member Gaige Sippy said. “Developing a purpose-built venue will allow for ease of approval, setup and specific amenities to make event planning streamlined.”
While the bike park will be designed for Olympic-caliber competition, there will also be an emphasis on beginner trails, as well as trails for the adaptive sports community.
“It’s important to the Foundation that we create an inclusive environment for all levels of riders, runners, hikers and nature seekers,” Sippy said. He added that trails will be planned for specific uses whenever possible, such as trails dedicated to runners/hikers,  bikes, equestrians and even e-bikes. “We want to create a park where every age and ability of Durango resident and visitor will feel welcome,” he said. “We want to encourage everyone to treat Durango Mesa Park as their own personal playground once we’re open.”
The Foundation is leading the effort with the City of Durango, La Plata County and other partners to plan and develop 800 acres of the property, leaving the rest as open space. In addition to trails, other planned amenities include a music and cultural event venue, a new and expanded La Plata County Fairgrounds, disc golf course, dog park and outdoor sports complex with sports fields in the future.
The County began planning for the new fairgrounds in 2016, and the city began working on its plan for the area, which included a bike park, in 2018. The estimated cost for both plans came in at $150 million. As a result, all three parties laid out a strategy to tackle the project in smaller, more financially digestible phases. The first phase, which includes the bike park as well as the start of fairgrounds construction and infrastructure such as road improvements, restrooms and water supply, is budgeted at $15 million. According to the foundation, these improvements are the critical first step in “unlocking” future amenities and getting the park open to the public.
However, with $5 million from the Foundation for the bike park and $5 million allocated from the County for initial construction on the fairgrounds and its share of infrastructure, the process at the City is moving more slowly. The City had originally set aside funds for construction of the bike park, so with the Foundation taking over that, the money could be allocated for another use. Sippy said no additional taxpayer money would be needed to complete Phase 1, but he called on the community to let City leaders know how vital the project is. “We need to talk to our public officials about why Durango Mesa Park is an important community asset,” Sippy said. “We need the City to partner with us on the infrastructure, something they do very well. You don’t get these deals often.”
With financial support from the City, the Foundation believes work could begin this year.
“Initial investments will pay huge dividends in the short and long term, both from an economic standpoint as well as contributing to quality of life,” Foundation Executive Director Moira Montrose Compton said. “We continue to work with our partners at La Plata County and the City of Durango to support important infrastructure investments as well as future phases. We intend for this to be the beginning of a number of successful public/private partnerships that will benefit our community for generations to come.”
For more about Durango Mesa Park, go to: durangomesapark.org 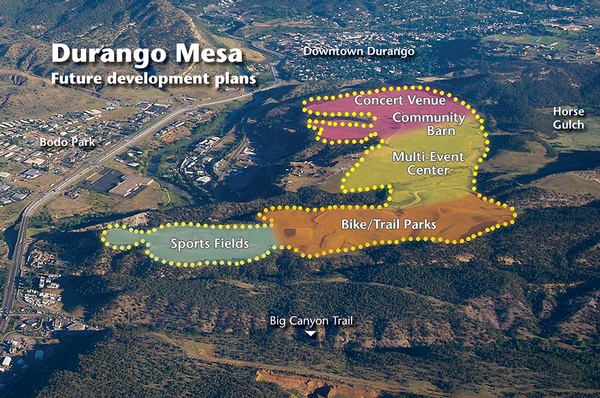