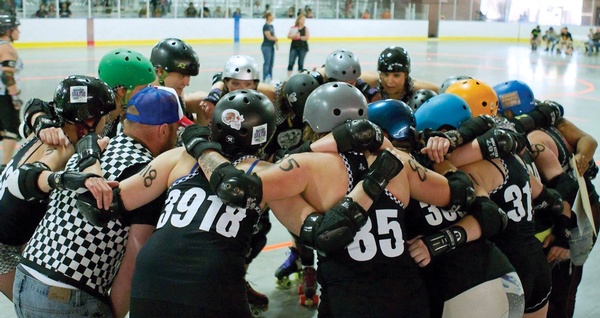 The Durango Roller Girls were formed in 2009. After a brief hiatus during the pandemic, the roller derby team is set to host its first bout since 2019 on Sept. 10 at Chapman Hill./ Courtesy photo

Mark your calendars – for the first time since before the pandemic, roller derby is coming back to Durango.

“Everyone is ready to get back out there and start skating again,” Celeste Hanson-Weller, league president, said.

The Durango Roller Girls was founded in July 2009 after a group of women started posting flyers around town in an attempt to form a roller derby team. As local lore goes, the team had no idea what it was doing – skating in the opposite direction and not wearing any pads. But, they reached out to other teams and people in the know and ultimately learned the rules.

“Slowly, it all came together,” said Hanson-Weller, whose derby name is “D’Cell Punk.”

By 2019, the Durango Roller Girls had about 12 skaters and regularly held bouts in Durango as well as traveled the region to face teams on the Front Range and around the West. The team took a holiday break in winter 2019/20 and was just getting back to practices when… well, you know.

The Roller Girls kept in touch with each other during the pandemic but were unable to practice or hold bouts. Practices picked up a little bit in the summer of 2021, but now, the team is finally at the point where it’s ready to hold its first real match.

“It was really, really tough to have it stop,” Hanson-Weller said. “But it’s been great getting back and seeing our numbers grow. We’re working together to be the best team we can be.”

Evolution of a sport

Roller derby dates back to the 1930s, though the events then looked far different than they do today. Back then, 25 two-person teams would skate around an oval track, putting in 11-hour days for events that could last more than a month. Sounds exciting.

As the sport evolved, it became clear that crowds were most entertained by the collisions and fights. Skaters were then encouraged to elbow one another, dramatically fall and get into scuffles. By the 1940s, roller derbies were televised and drew thousands of people to events.

Over the ensuing decades, traditional roller derby waned in popularity. In the 1980s/’90s, several versions appeared on TV to revive the sport, including “RollerGames,” which sort of looked like WWE on roller skates (if the game went to sudden death, you could throw your opponent in a live alligator pit). Not surprisingly, these attempts didn’t work at gaining an audience.

In the early 2000s, however, modern women’s roller derby started in Austin, Texas, combining the traditional structure with a few minor tweaks and an emphasis on all-women teams (earlier versions included all-men’s teams, too). And it took off – today, there are more than 400 roller derby leagues worldwide, according to the Women’s Flat Track Derby Association.

So how’s the modern version of roller derby played? Well, for us simple spectators, here’s what you need to know.

Each team has five skaters on the rink at a time: one “jammer” and four “blockers.” When the whistle blows, both jammers fight to break out from the pack. The first jammer to do so is called the “lead jammer.” Both team’s jammers are tasked with racing around the rink, scoring a point every time they lap an opponent’s blocker.

The blockers, meanwhile, are working to keep that from happening by forming a wall, slowing the other team down or pushing players out of bounds, to name a few tactics. Despite the glory days of the 1980s with alligator pits and body slams, the rules today do not allow hitting, punching, elbowing, clotheslining, slamming players to the ground – you get the point.

Bouts are 60 minutes total, divided into two halves. Each 30-minute half is broken down into two minute “jams.” It should be noted, the lead jammer has the ability to end the jam at any point for strategic reasons. And, one designated “pivot blocker” can become a jammer by taking the jammer’s star on her helmet while in play.

Or, if this still doesn’t make any sense, there’s one rule that will get you through the game: the team at the end with the most points, wins.

For many women, roller derby has provided a sense of community as well as one hell of a workout.

Hanson-Weller said she started roller derby about eight years ago after a friend suggested she try out. A self-proclaimed workaholic, Hanson-Weller said she was looking for an outlet and wanted to meet new people. A bit apprehensive at first about getting injured, once she was on the rink, she was sold.

“I just knew it was for me,” said Hanson-Weller, who plays both jammer and blocker. “It’s been a great decision. I just love it.”

Kelsey Beaver, who goes by Eager Beaver, started roller derby around 2015. Having been homeschooled and not allowed to play sports, she was intrigued when she saw a banner outside Chapman advertising a Roller Girls bout. She showed up at the next practice, not even knowing how to skate. Yet, she, too, immediately knew this was the sport for her.

“I had a lot of aggression to take out, and this seemed like a healthy way to do it,” she said. “I grew up extremely sheltered with not a lot of friends, and needed something healthy to keep me on a good track. Roller derby changed my whole life, and it’s motivated me to live a healthier lifestyle.”

The Durango Roller Girls come from all walks of life – nurses, EMTs, attorneys, even a clock repairer. But one common theme is having a competitive nature and wanting to accomplish a goal with a team.

“We’ve become a family, and, in a sense, we go to battle on the tracks sometimes,” Beaver said. “We all have each other’s backs and have built lifelong friendships outside of roller derby.”

Back on a roll

Coming out of the pandemic, roller derby teams everywhere have been forced to rebuild. But it’s not all bad – with so many people moving over the past few years, Durango actually saw an uptick of new skaters who relocated here from cities. But, it’s a matter of getting new and old team members back up to speed.

Kendel Teran, whose derby name is Cox Blocker (and obviously plays blocker), said she didn’t even know how to skate when she joined the team around 2019. Now, she’s teaching the newbies.

“Gaining the muscles for skating is really difficult,” Teran said. “The first practice I went to I fell square on my butt, and it hurt so bad. But they’re so supportive, it was impossible to say no. And, eventually, you learn how to fall safely and trust your protective gear.”

The Durango Roller Girls are entirely run by team members. And if this particular niche in life appeals to you, anyone over 18 is encouraged to come to a practice and try out – you don’t need to know how to skate and, gear is provided.

Hanson-Weller said this September’s bout at Chapman will be the only one in Durango for 2022, but she expects the team to get back to a normal schedule in summer 2023 (which means three to four home games). Once afraid of falling or getting hit, Hanson-Weller recently got her first roller derby bruise since the pandemic.

“I was actually pretty proud of it,” she said.