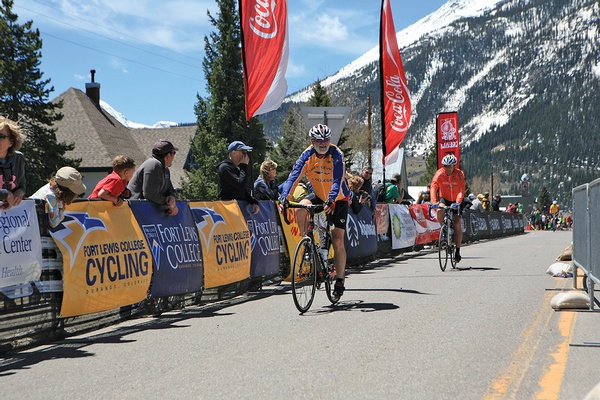 In years past, including 2011 pictured above, the Iron Horse Bicycle Classic has had plenty of snow-capped mountains as part of the backdrop. This year, though, is likely to have more than most years./Photo by Stephen Eginoire

This weekend marks the start of summer for most people across the country. In the Southwest, however, it feels more like the winter that never ends. With an epic snowpack sitting at nearly 250 percent of average and a historically wet May, no matter what happens over Memorial Day weekend, it will be one for the record books.

“I don’t remember a year when this much snow was still on the sides of the road,” Gaige Sippy, director of the Iron Horse Bicycle Classic, said. “We may not see this for another 48 years.”

Not only are conditions going to be unique for cyclists registered for the 48th annual Iron Horse Bicycle Classic this weekend, it’ll be the first time in history that those finishing the Quarter Horse race at Purgatory will be able to lock up their bikes, slap on some skis and hit the slopes. “That tells you what kind of spring we’re having,” he added.

Never before has Purgatory been open for winter operations on Memorial Day weekend. With more than 360 inches this season – including an extra foot that fell in just the past couple days – the resort hasn’t enjoyed this much snow since the 1970s.

Of course, all that snow brings its own challenges. According to the resort’s Director of Mountain Operations Sam Williams, safety was the biggest.

He said the top concern this season was dealing with avalanche danger while taking guests out in the backcountry as part of the resort’s Snowcat Adventures. Potential slides and sloughs were even an issue within the ski area boundaries. In fact, the resort’s regular opening times were delayed on occasion due to mitigation.

But it’s a trade-off Williams is fine with. “I would rather have too much snow than not enough,” he said.

Also on the plus-side of having record snowfall, Purgatory was able to stay open until May 4. The first weekend in May helped the resort make history, and officials celebrated being open in May for the first time ever with t-shirt giveaways and about 1,000 guests.

Most people figured that was the end of the season –but, not everyone.

“We kind of knew at some point we might reopen,” Stacey Glaser, marketing director for Mountain Capital Partners, Purgatory’s parent company, admitted. “James (Coleman) never stops thinking about winter, and neither do we.”

The plan for this weekend is to run Lift 1 on the resort’s frontside for those interested in hitting the slopes and for scenic rides. The runs expected to be open to skiers and boarders include What, Lower Mercy, Westfork, Sa’s Psyche, El Diablo, Demon and the Pitchfork Terrain Park.

In the base area, most of the summer offerings will be available, including the zip line, bungee trampoline, ropes course, treasure panning, gyro chair and bouncy house. In addition, guests will also be able to take a ride on the Inferno Mountain Coaster.

The coaster was meant to be a year-round offering at Purg, but with all this year’s snow – and several attempts to dig it out by employees – Williams said they decided to stop fighting Mother Nature and closed the coaster in mid-January. It reopens this Saturday to celebrate the start of “summer.”

Glaser said things at Purgatory are going to look very different to years past. “We have so much snow on the mountain,” she explained.

The mid-mountain depth sits at about 4 feet, and some summer amenities are still buried in snow. The bike park likely won’t open until mid-June when things begin to melt. In addition, employees can’t even start putting the Alpine Slide together because the snowcats need access to groom the slopes.

In spite of the challenges, Glaser said everyone’s excited and proud to be a part of it all.

“It’s so exciting to be skiing in May,” she added. “It’s been an incredible season.”

While it may be one for the record books at Purgatory, it’s not the first time Iron Horse organizers have had to plow through snow to put on their event.

In years past, the Iron Horse has been forced to move the finish line to Purgatory several times because it wasn’t safe for riders to traverse the mountain passes to Silverton. In 2014, they even canceled the event. There have also been times when the temperatures were so cold organizers had buses parked along the route so riders could warm up.

This year as the competitors wind their way through the San Juans, they could again face extreme cold, howling winds, snowfall, rainfall or maybe even sunny skies. The trick for Iron Horse organizers is having contingency plans in place for whatever Mother Nature might throw at them.

“While this is a challenge, I think it’s a welcome challenge,” Sippy explained.

In an effort to be as prepared as possible, they’ve hired a meteorologist with Open Snow to track the weather patterns along the race’s main route. As the race nears, they’ll take additional steps and in the early dawn hours Saturday, Sippy said, state patrollers will head up to Coal Bank and Molas to check out road conditions.

If things are unsafe, they’ll implement Plan B and move the finish line to Purgatory. If things are sketchy along the road to the resort, the event might have to be canceled. At this point, however, it appears likely there will be a window of sunny skies, no moisture, and warmer temperatures starting Friday morning and lasting until Sunday – the last day of the event.

“Mother Nature can trick you, so we don’t like to pull the trigger until it’s time,” Sippy said.

As of presstime, the only change Iron Horse organizers have made is altering the route for cyclists coming into the Quarter Horse finish line. In an effort to keep some distance between the bicycles and vehicles heading into Purgatory, riders will pass the resort’s main entrance and enter just down the highway at its secondary one. For the latest weather updates on the Iron Horse, check out the weather tab at www.ironhorsebicycleclassic.com

Iron Horse Director Gaige Sippy said when he started heading up the event 13 years ago, the paperwork required to put the Iron Horse together – including permits and insurance – could have been tacked together with one staple. Today, the stack is an inch and a half thick. “It’s just the way of the world,” he added. As the town continues to grow, Sippy explained, it becomes more and more difficult to host events downtown. With that in mind, organizers decided this year to move everything to Buckley Park, which will serve as the overall base of operations for most activities, like the start/finish line for some races, Kids Village, and kickoff party. For a complete list of events, check out the Iron Horse calendar on page 21. 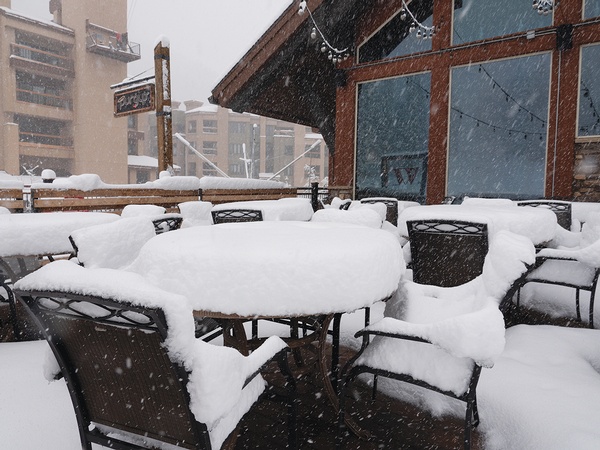 About 8 inches of snow fell at Purgatory Resort on Monday, pictured above. Storms are expected through Thursday, then sunny skies over the weekend and storms again starting Monday./Courtesy photo

Officials recently announced, for the first time ever, the prize money split between the top 10 riders in the men’s and women’s pro divisions for the 48th annual Iron Horse Bicycle Classic will be the same. Because the event is registration-based rather than sponsorship-based, the purses have depended upon the number of riders registered in each division. With fewer women entering, it meant they often had less prize money – even with organizers offering a purse in the pro women’s division that’s exceeded registration numbers for the past several years. After several professional women cyclists and others from the Durango area came together to campaign for equal purses, Iron Horse officials made it happen this year. Iron Horse Director Gaige Sippy said while he thinks it’s a good thing to offer the equal purse amounts, what really needs to happen is a push to get more women out on bikes and competing. This year, he explained, 79 men and nine women are registered for the professional road race to Silverton. Over the past several years, when taking his own daughter to cycling events, Sippy said he’s noticed things are starting to change. “I’m seeing more and more young girls getting into it,” he added. “Let’s start working hard on getting more women involved in cycling.”