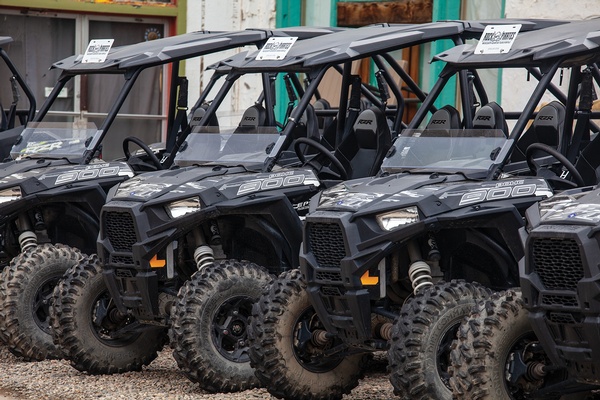 The off-highway vehicles with side-by-side seating can be found everywhere around Silverton. These types of OHVs have opened up the world of off-roading to a lot more people because, unlike single-seater ATVs or motorcycles, the whole family can now fit into a vehicle capable of traversing the San Juan Mountains like never before./Photo by Stephen Eginoire

These days a drive along the Million Dollar Highway includes something besides the remnants of old mining activities and tourists taking pictures at scenic spots. Everywhere you look, trailers and trailheads are packed with OHVs, or off-highway vehicles.

They are wonders of modern recreation and come in all shapes and sizes – side-by-sides, single seaters, ATVs, motorcycles, snowmobiles, even jeeps or SUVs can fall into the OHV category.

But, the one getting the most attention today is the side- by-side.

This type of vehicle gets its name because two people can sit side-by-side, instead of single file like on a motorcycle. They have opened up the world of off-roading to a lot more people because, unlike single-seater ATVs or motorcycles, the whole family can now fit into a four-seater that’s got the ability to traverse the San Juan Mountains like never before.

Side-by-sides are easier to handle than other OHVs, have shorter wheel bases, plenty of ground clearance, aggressive tires and more horsepower than many of our first cars. They can be as fast as cars (easily topping 60 mph) and as comfortable, with some of the latest styles adding AC and heat.

Their recent rise in popularity isn’t about being a new technology – they’ve been around for decades, albeit without all the bells and whistles. It’s not about cost, either. In fact, it’s easy to spend $20,000 or more on a new OHV.

The reason for the ever-increasing number of sightings across the San Juans, according local law enforcement, is the fact that the secret is out.

“The Alpine Loop has really been discovered in the last few years,” San Juan County Undersheriff Steve Lowrance said. “Once you have folks that have great experiences, they’re going to tell others.”

The Alpine Loop is more than 60 miles of four-wheel drive roadway running across Engineer and Cinnamon passes, through several mining ghost towns, around a few famous Colorado fourteeners, and encompassing Silverton, Ouray and Lake City.

Every time someone experiences the Loop and the San Juan Mountains, they can’t help but share their stories.

Whether it’s a recommendation on an OHV forum, a posting on Facebook, Instagram shot with remarkable views, or just a shared story about an epic vacation, people all over are talking about the Alpine Loop.

“Certainly, word is out,” Hinsdale County Undersheriff Justin Casey said. “The people I talk to say they got their information off the internet.”

And every year, more and more come to experience it for themselves.

According to Lowrance, San Juan and Hinsdale counties share the cost for upkeep and maintenance of the roadway, which is getting harder and harder. The aggressive tires common on today’s OHVs have deeper grooves, angled tread designs, harder compounds and other features that give them better grip and stability for off-roading.

They also tend to cause more wear and tear, and this means more upkeep.

“People are looking for ideas to help us fund more road and bridge damage because a lot of (the OHVs) can really tear up the road,” Lowrance explained.

The idea of charging an entrance fee along the Alpine Loop has been floated by local leaders for a few years but, according to Casey, the Loop is a public road and charging to use it might not be an option. He said the Hinsdale County attorney counseled commissioners against the idea.

Unfortunately, maintenance isn’t the only thing these local municipalities have to pay for. They’re also responsible for setting the safety regulations and funding enforcement.

Currently, there’s only one person actively patrolling the Alpine Loop, Alpine Ranger Alan Rae. He travels up and down the loop, between Silverton and Lake City, helping local law enforcement with medical emergencies, giving visitors directions, letting them know the rules and answering any questions that come his way.

The Alpine Ranger program (which is funded by Silverton, Lake City, and San Juan and Hinsdale counties) has been around for almost a decade; and, Rae’s been in the ranger seat for the past three years. Although he enjoys the job and the people, it’s a lot of ground to cover for just one person.

Rae’s not the only one who would welcome another ranger. “A lot of us feel it’s inevitable this ranger program will have to be expanded,” Lowrance said.

Lowrance, Casey and Rae all said that San Juan and Hinsdale counties have worked well together over the years, keeping the Alpine Loop maintained and its users in check. But, they’ve also come together to set the actual rules of the road.

Over the past few years, the two counties have been able to create complimentary rules and regulations for OHVs along the loop. It makes it easier for users to traverse the length of the Alpine Loop without having to find out what the new rules are whenever they enter a different town or county.

These rules include requiring OHV drivers to have a valid driver’s license and liability insurance, making sure any passenger under 18 years of age wears a helmet, and having smaller children secured with seat belts or a restraint system.

“A lot of people are looking to us to be the pioneers,” Lowrance explained. “In fact, a lot of the rules are now being passed at the state level.”

After joining Rae on his patrols along the Loop and talking to local law enforcement, State Rep. Barbara McLachlan brought a bill to the capitol this past spring called HB18- 1103, or Local Government Off-highway Vehicle Regulation. It passed both houses and was signed into law March 29.

It makes many of the rules along the Loop – like helmets and safety belts – a requirement statewide. Other things – like needing a driver’s license – are left up to local governments to decide upon.

Lowrance said since the newest ordinance was passed in Silverton last year, in which they now require seat belts and restraint systems for children, there has been an increase in compliance and a significant decline in serious injuries.

“Because of these new rules and compliance, I guarantee you we have saved lives,” he added.

Casey explained the same is true for Hinsdale County. When they first started requiring OHV drivers to have a valid driver’s license, which was about five years ago, the number of OHV crashes in Hinsdale dropped dramatically.

“Our primary concern is the safety of all of our visitors,” Lowrance said.

Several years ago, Silverton chose to allow OHVs on some of its downtown streets. One of the pros was that it allows visitors to spend more time – and more money – tooling around town and checking out the local scene.

It also means possible issues with parking in the wrong spot or failing to obey the same safety rules as other vehicles on the roadway. Another concern was that OHV users would feel free to take their vehicles just about anywhere.

San Juan County Sheriff Bruce Conrad’s recurring blotter in the Silverton Standard can be entertaining, but it’s also an example of what can go wrong. Almost every day, the sheriff logs at least one OHV encounter – some are friendly warnings to obey the rules, some are not-so-friendly warnings, tickets, citations or even accidents.

Most recently, the town was on the hunt for motorcyclists who took a joyride through pristine alpine tundra outside of town, an incursion locals were not happy about. After the San Juan County sheriff posted the perpetrators images on Facebook, they quickly turned themselves in.

According to the Standard, they just as quickly asked the sheriff to remove the posting because they had been getting death threats.

As much as locals and visitors enjoy being able to get

out into the San Juan Mountains, everyone agrees the popularity of the Alpine Loop will only increase in the coming years. Like many other natural wonders across the nation – including Yellowstone National Park or the Grand Canyon – this popularity can begin to wear on the environment it celebrates.

“We’re seeing more people every year enjoying the scenic views that we have up here ... it’s starting to become well known throughout the country,” Rae said. “And they all say, they’re coming back.” 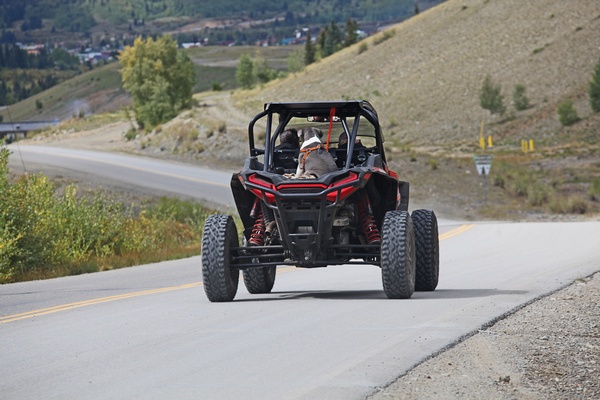 Several years ago, Silverton chose to allow OHVs on some streets. One of the pros was it allows visitors to spend more time – and more money – tooling around town. But, it also has its downsides./Photo by Stephen Eginoire