Road to recovery
For men fighting addiction, Denver's Rescue Mission is a lifeline 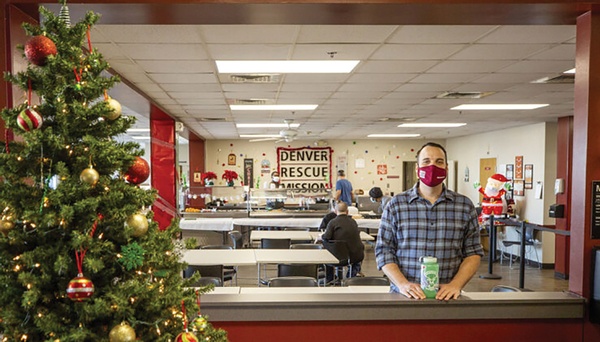 Evan Bontrager stands in the cafeteria at the Denver Rescue Mission's The Crossing facility on Jan. 4. / Photo by Kevin J. Beaty - Denverite

On Christmas Day, Evan Bontrager sat at his sister’s dinner table cutting chocolates for his family to share. He bought a box from the Rocky Mountain Chocolate Factory and wanted to make sure everyone tried them.

He sipped sparkling water, which he loves. Christmas carols played in the background as his family sampled the chocolate and told jokes. He looked around the table feeling full of gratitude, he said.

This Christmas was special.

For many, the start and end of a year means setting goals and celebrating accomplishments. This year, Bontrager, 32, had big milestones to celebrate: seven months of being sober and reconnecting with his family.

After years of missing family gatherings because of his drug and alcohol addiction, he was finally back among his loved ones.

“I was just like, I’m here right now and things are good,” he said.

He credits his ongoing recovery to the New Life Program at the Denver Rescue Mission, a project that since 1994 has been helping men struggling with substance abuse and homelessness get back on their feet.

Last year, 36 men graduated. In 2020, the number was nearly twice that at 62. The COVID pandemic forced the program to downsize, and in February 2021, the buildings where the program is housed flooded from burst pipes, which resulted in fewer participants when the men had to move to a nearby hotel. Despite those troubles, men are graduating from the program.

The results speak for themselves: 86% of graduates are sober and housed one year after completing the program.

“I think people think you can beat addiction on your own, like it’s all about your willpower,” Jonathan Soweidy, director of residential programs at the Mission, said. “But really it’s about relationships and letting people in and connection.”

Bontrager joined the program after being arrested in Fort Collins for breaking and entering last June. He was sleeping in an abandoned frat house.

“Oh, it was so embarrassing,” he recalled. “I wouldn’t be sleeping in a frat house if I wasn’t, you know, on drugs or in a dire situation.”

He’d been drinking and using drugs since college at that point. He grew up in Limon, which he said was boring as a teenager, and was in trouble for shoplifting and vandalism in high school.

In 2008 when he went to college, he started drinking. He thought it was harmless partying. That escalated to him using multiple drugs, including heroin. He slowly realized he felt like he needed drugs and alcohol to get through the days.

“Eventually it was like, ‘oh, this is, because you’re trying to get outside the feelings that you’re feeling,’” he said. “So drown it with alcohol.”

He dropped out of college the following year and would couch surf, or find somewhere cheap to rent. He spent weeks and sometimes months without a place to stay. He tried every drug he could get his hands on and struggled to keep a job.

His parents, Ellie and Warren Bontrager, quickly realized that bailing him out or giving him money and a place to stay enabled his drug and alcohol use.

“We would try to minimize the damage though,” Warren said. “I would drive five hours to find something that he, you know, left behind and collect it and store at our house, again, waiting for him to… get back out of prison and start over again.”

The Bontragers were thrilled when their son decided to join the New Life Program. But they’ve maintained cautious optimism. They say they pray he will stay the course.

“It’s just a day by day, hour by hour, minute by minute struggle for these guys,” Ellie said. “It’s just a very, very tough thing for them and their families.”

But the Bontragers are hopeful that the New Life Program and Evan’s commitment means he’s finally overcome his addiction.

Evan has taken classes, undergone therapy and even joined a running club through the program. His success meant he could stay off-site for Christmas. For weeks, he helped plan the gathering at his sister’s house in Glenwood Springs. He made gifts for his family and asked his case manager for a white slip to go off-site.

“I was actually really excited for him because he’s a really caring guy,” Kelsea Nelson, Evan’s case manager, said. “It’s really obvious when you talk to him that he cares a lot about people and he cares about his family. And so I was excited for him to reach this other goal or step in improving his relationships with his family.”

Nelson talked with Evan about the triggers that sometimes come with seeing family and counseled him on calling for support if he was struggling with temptation during the trip.

He did face temptation. On the drive to his sister’s, Evan said he noticed every pot shop, and at her house, there was alcohol. Some in the form of little liquor-filled chocolates.

“And so my thought was like, ‘Hey, you can probably go eat a couple of those. They look good. Like they won’t get you blitzed or anything,’” he thought to himself.

But he resisted. He didn’t drink or use drugs on the trip. He said it was easier this time, even though his brain told him otherwise. “I didn’t have anything to hide or cover up, so I didn’t have to worry about my story,” he said. “Just be yourself, tell the truth, it’s the easiest way to do it.”

Evan is on track to graduate from the New Life Program this month. His next step is to get his license back and then find a job. He can stay in the Denver Rescue Missions’ residential housing called The Crossing until he has enough money for his own place.

He’s interested in energy sustainability and hopes to one day get training to work on wind farms. Evan also wants to help people and travel the country. He wants to see what lies beyond Colorado.

“I want something to be proud of,” he said. “I look forward to living a normal life and not needing something to change how I feel or make my feeling better, you know? I can live without that hook, you know, without that dependence on something else.”