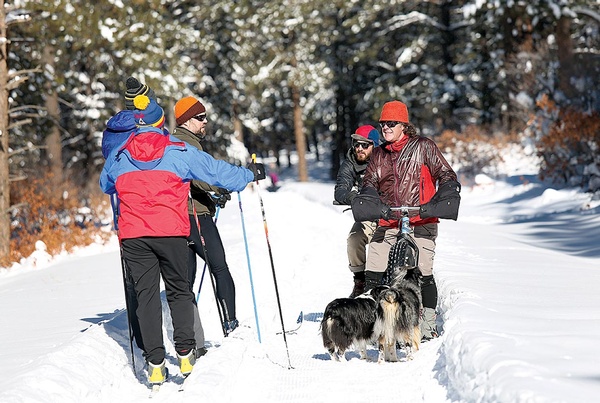 Trail users stop to chat at Boggy Draw on Fri., Jan. 27. The popular mountain biking area just outside Dolores is now being groomed by a dedicated crew of volunteers for winter use. There are 17.5 miles of track for cross country skiing, snowshoeing and fat biking./Photo by Jennaye Derge

Will I ever be warm again?” I ask myself as I sit in my truck with permafrost limbs and ice forming around my drippy nose. I slip into a hypothermic state waiting for my truck to warm up and dream of warmer times. Like sitting in the saddle of my mountain bike – tank top, shorts and sun-shine, floating on dirt trails and feeling warm.

No doubt, winter days can be bleak. But it’s safe to say the best way to get through them is to not try to beat them, but to get outside and join them. And luckily for those of us dreaming of a spin to stretch our frozen limbs, it’s now possible thanks to a group of volunteers from the Dolores, Cortez and Mancos areas. Since the beginning of last winter, these guys have mapped out, packed down and groomed around 17.5 miles of snowy singletrack in the San Juan National Forest at Boggy Draw, outside Dolores. In the dry seasons, the trail system serves mountain bikers, runners and hikers and in the winter, its manicured track provides a haven for cross country skiers, snowshoers and fat bikers.

The idea for the trail system spawned from Mancos resident Mike Gostlin. An avid biker and skier, he would ride Boggy Draw in the summer months with his GPS, mapping out points that ran along the area’s old, underutilized Forest Service roads. He then did some research, asked the Forest Service for permission, wrangled up a few buddies and began putting together a team to create the winter playground.

“We want everyone to come out and try it,” volunteer groomer Eric Houge says. Houge has been grooming with the gang, including his 12-year-old son, Grayson, since day one and is happy to commit his free time and money to maintain the trail and the homemade snow groomers.

“Mike found snow groomers and designs online, and we’ve all built them using those designs from the internet,” Houge says.

The homemade groomers, which are pulled slowly behind snowmobiles, are built to break apart snow crystals so the top layer of the snow refreezes as a hard crust. The process is usually done late in the evening or late afternoon so the trail harden overnight and be ready for use the next day.

Houge and son have already logged over 50 volunteer hours on the groomer. “He loves it,” Eric says of Grayson. “He builds snowmen and does giant belly flops off the snow while we’re out.”

Houge says the trail is helping to bring winter warriors to Dolores from all over including Durango, Farmington and Silverton, to give the trail a try.

“It turns out so many people use it now,” he says. “We’ll come to the trail-heads on the weekends and they’ll see us and say ‘hi’ to us and know us as ‘the groomers.’” Houge says.

The crew spends a lot of its free time on the trails, either maintaining or playing on them. Most of them are avid fat bikers and they say the sport has become more and more popular in the area.

“The fat bike thing has come on like a freight train in the last two years, it used to be a real niche, now all the big dogs are on board,” trail advocate Ken Fagerlin says.

Fat biking, though prohibited on some groomed trails around Durango, is allowed on Boggy Draw. The sport is a great wintertime replacement for anyone shivering in their trucks and experiencing mountain bike withdrawals, or just looking for a break from the skis.

hard work, the second annual Boggy Draw Groomer Party takes place on Sun., Feb. 12. The day acts as not only as team-building and community outreach but also as a fundraiser for the volunteers.

“We certainly can’t pay them for their time but that money goes toward some fuel and any maintenance on their groomers,” says Fagerlin, who helped to organize the event. “They’re just a great group of guys. I guess we all come to a point where we’re not as self-absorbed with our activities and our recreation, and we want to give back in some sort of way ... and these guys happened to just dive right in.”

The event, which is being held in the Boggy Draw parking lot, will include a group ride, contest (wheelie and Tokyo drift for starters), free food and beer, bonfire, and everyone’s favorite from last year, a time trial BB gun race. And to make it even more interesting, the BB time trial will be done sans seat.

There will also be prizes and swag from Carvers, Nini’s, Zia, Osprey, and Kokopelli Bike and Board. Kokopelli will also be offering fat bike rentals. (The Cortez gear shop is also the favorite hangout of the groomers and where most of them met and became good friends.)

“We’re all family, we’re all buddies, we all instigate doing things together whether it’s this or riding, etc. ...,” volunteer groomer Shawn Peed says.

There is no indication of that ending either. The group of volunteers love the trail, love grooming and love bikes and skis so much, that they say their only goal for the future is to improve upon what they started.

“I’d like to see more trails; Grayson wants jumps ... We want to bike 12 months out of the year,” Houge says. For more details and a map of the Boggy Draw winter trail system, go to http://swcocycling.clubexpress.com/ 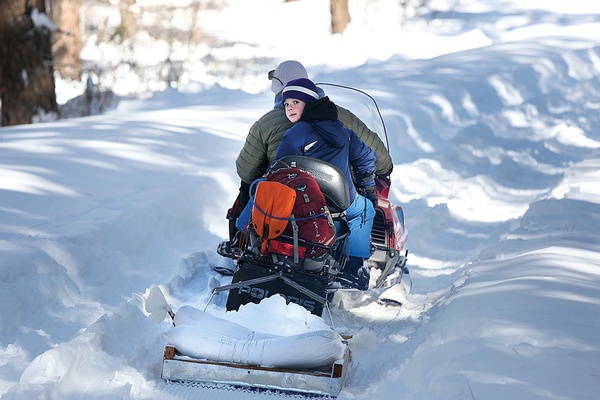 Boggy Draw volunteer Eric Houge and son, Grayson, 12, get the sandbags and snowmo out for some do-it-yourself grooming. The groomers are hosting a party/fund-raiser Feb. 12 in the Boggy Draw parking lot./Photo by Jennaye Derge

Fat bikers have two upcoming opportunities for big-wheeled fun in the area:

- Silverton White Out, Sat., Feb. 4 – a 10-hour fat bike race in and around Silverton. Options for serious racers down to families and serious partiers. Expect bacon, costumes, fireworks and a few surprises along the way. For more, go to: www.silvertonwhiteout.com