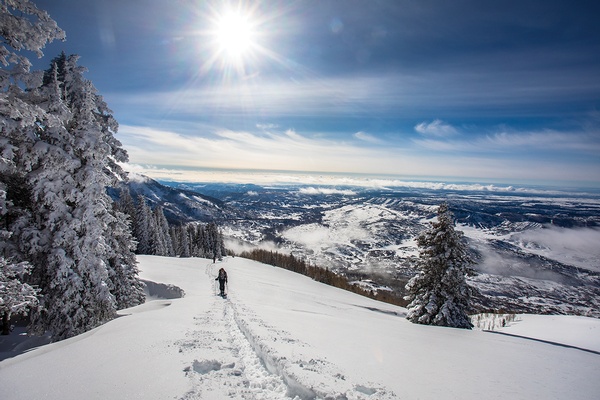 This is the time of year when residents are ready to put away the ski boots and break out the hiking boots. But the hankering to hit the trails may have to wait a little longer this year.

“We’re not able to get into the mid-country or the backcountry to see what it looks like,” Mary Monroe Brown, executive director for Trails 2000, said. “We don’t know what we’re in for.”

Many of the local trails are still buried in snow, and the ones that are accessible are a muddy mess.

Monroe Brown said they were hoping to get to work on trails March 4. Instead, they’re four weeks behind and uncertain when Mother Nature will let them in.

It’s no secret the snowfall this season has been one for the record books. Records have been set across the Southwest, and it’s likely to be some time before many beloved trails are even accessible.

Purgatory Resort had one of its best seasons ever with a total of 352 inches so far. Wolf Creek Ski Area currently sits at 484 inches.

According to the Natural Resources Conservation Service, the month of February was the real game-changer for Colorado. It was particularly good in the Southwest, dumping 196 percent of the average precipitation for the month.

“Colorado’s snow enthusiasts rejoiced during February when there did not seem to be a lull for more than a few days between snow events, particularly in the southern mountains of the state,” the NRCS’s March report reads.

Many SNOTEL sites in the Rio Grande and San Miguel/Animas/Dolores/San Juan river basins experienced record February snowfall and many more had the second-highest to date. Several SNOTEL sites even reported more than 300 percent of normal.

As of April 1, the snowpack statewide was 136 percent of the median, while the San Miguel/Dolores/Animas/San Juan basin was at 157 percent.

“Living here, we’re always glad for the moisture,” Monroe Brown said. “What’s surprising is how quickly it melts.” Warm daytime temperatures in March meant much of the snow in the lower elevations virtually disappeared, which resulted in a muddy mess for trails like Boggy Draw and Animas Mountain.

With temperatures dropping overnight and keeping things cold, it’s kept the snowpack stable in the higher elevations and the snowmelt steady overall. And, that’s welcome news for land managers and trail users across the region.

A fast melt would come with its own pitfalls – like a greater risk for severe flooding in the 416 Fire burn area, a shorter boating season and heavy trail damage from erosion.

Monroe Brown’s advice for everyone is to stay informed this spring. “We would really like people to check out the trail conditions on our website,” she added.

When the team and crew members at Trails 2000 do get into the mid- and high country trails, the focus will be on clearing dead trees, repairing trails damaged from erosion and other maintenance projects. Other projects include work on the Vallecito Trail and several trails in Horse Gulch.

Efforts to address some of the downed and dead trees in the Hermosa Creek trail system, damaged during last year’s 416 Fire, will have to wait until the U.S. Forest Service gives Trails 2000 crews the all clear to enter. Monroe Brown said they’ll likely find out exactly when that will be in the next few weeks.

In addition to the upkeep and repair work, the nonprofit also has some new construction planned – like the new SkyRaider Trail, which branches off the Powerline Trail near Molas Drive in the Sky Ridge neighborhood.

All these projects were outlined in a schedule spanning more than eight months. Now they’ll need to fit all that work into just seven months. It’s a good thing they’ve got extra help.

Trails 2000 already had budgeted for new sawyers (tree cutters) and a trail crew leader in its 2019 budget. They knew they’d need the extra hands because of all the damage resulting from the 416 Fire, but following this winter’s Snowmageddon, it’ll be key having the additional staff.

“We haven’t seen impacts like this,” Monroe Brown said. “It’s going to be a super epic year.”

The threat of flooding from the 416 Fire burn area still looms large, and La Plata County Emergency Management officials are keeping a close eye on the situation.

It all depends on the weather. If temperatures stay cold overnight, even when the days are warm, snowmelt will likely be steady and the threat of massive flooding diminished. If temperatures are high throughout the nighttime or the rain hits hard, it could result in the kind of floods and debris flows that keep residents and emergency managers up at night.

For the latest alerts, sign up for the county’s Code Red alert system. Go to the La Plata County website at co.laplata.co.us and click on the “Emergency Notifications.”

Some trails around Durango are open year-round, like the Colorado Trail, Horse Gulch and Overend Mountain Park. Other trails have seasonal closures, like Carbon Junction, Twin Buttes and Perins Peak. Most seasonal trails reopen April 15, with Perins Peak re-opening July 31.

For the latest on trail conditions, closures and more, check out the Trails 2000 website at www.trails2000.org.

McPhee releases on docket for the Dolores 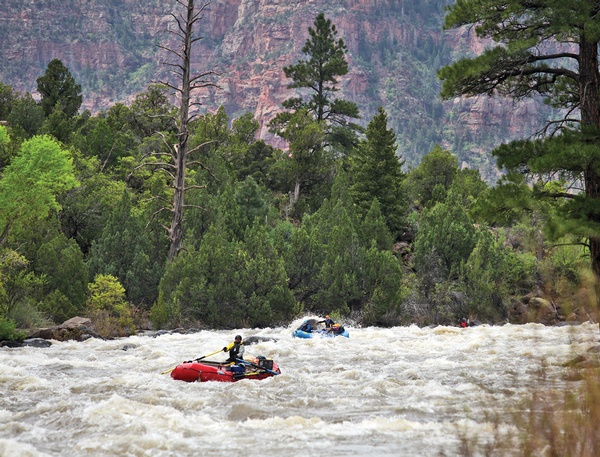 The massive snowfall this winter translates to a good season for boaters on the Animas River. It’s also turning out to be good for those hoping to hit the Dolores this spring.

The likelihood of a boating release from McPhee Reservoir wasn’t a certainty several months ago. With extremely low reservoir storage due to the drought last year, even a wet winter didn’t guarantee there would be enough to go around. But, conditions have worked in the boating community’s favor in recent weeks.

“We are going to have some kind of release,” Mike Preston, general manager for the Dolores Water Conservancy District, said.

It’ll happen sometime in May, but how much of a release is uncertain.

Preston said, on the smaller side, they’d be able to release around 40,000 acre feet from McPhee, which has a maximum capacity of 381,000 acre feet. The release would last 10 days to two weeks with peak flows of about 2,000 cfs.

The three factors that will determine which way things go are additional snowfall, temperatures and the onset of the irrigation season. At this point, it’s still a waiting game for water managers.

For the latest updates on McPhee and conditions on the Dolores, check out the Dolores Water Conservancy District’s website at doloreswater.com or the Dolores River Boating Advocates at doloresriverboating.org.

In addition, there will be a spill meeting, hosted by the U.S. Bureau of Reclamation, at 7 p.m., Thurs., April 18 at the Dolores Community Center.

On the Animas: For the latest readings from the USGS on the Animas River flows, check out the Telegraph website, www.durangotelegraph.com. It includes a direct link to all the nerdy data.