Running with the devil
Purgatory restores 666 trail to former glory 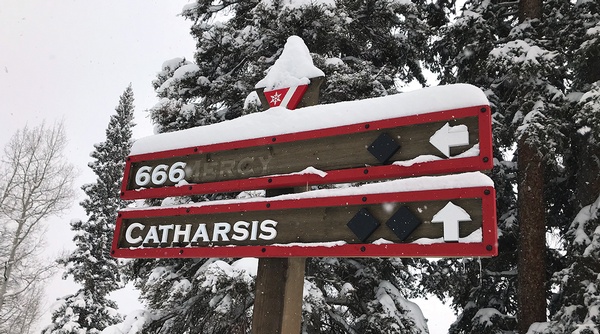 When it comes to reclaiming Purgatory’s storied past, the powers that be are showing no mercy.

That’s right. Sinners and saints alike can rejoice over more than the epic Deepcember of 2019 – 666 is back.

Can we get a hallelujah?

“Basically, James wanted to take it back, so he took it back,” Purg base operations manager and unofficial historian Jim “Hoody” Hards said. He was, of course, referring to Purgatory owner James Coleman (whose initials ironically are J.C. – just saying) who recently restored the diabolical name of the frontside run. Sometime in the late ’90s, it was bestowed with the more pious moniker, “No Mercy.”

Astute ski bums may have noticed the 666 name slowly creeping back onto Purgatory trails report earlier this season. However, newly installed trail signs – which were done by the same Telluride company that made that ski area’s signs – still bore “No Mercy” up until a few weeks ago. But, possibly under the cover of the prince of darkness, the lettering was taken down and replaced with the triple sixes sometime in the last few weeks. Nobody really knows for sure, deals with the devil are like that.

Coleman, unfortunately, did not return our email request for comment on the earth-shattering news, probably because he was shralping the pow. And no, we do not have a direct line to the big man upstairs.

But Hards, who’s been with Purgatory for 44 years – enough time to have a run and bar named after him – had the scoop on the 666 saga. As he tells it, despite popular belief, the change to No Mercy (again the actual year was iffy, just like snow reporting) was not a marketing ploy by the Vern Greco regime to lure more god-fearing Bible Belters. Rather, it was the idea of Vincent Duncan, a devout Catholic and brother to Purgatory founder, Ray.

“He was a very strong Catholic man, and he didn’t care for the 666 title, so he requested it be scrapped,” Hards said of Vincent.

For those not up to speed on Purg history, Ray Duncan, along with Chet Anderson, founded Purgatory in 1965. When Ray, who made his fortune as an oil man, left for the greener vineyards of California, Vincent stepped in to right the ship during tough financial times in the late ’80s and early ’90s. And given the era, he was probably no stranger to films like “The Exorcist” or “The Omen,” and likely thought it prudent not to conjure Satan on family vacations. Oh, and did we mention there was a monsignor in the family?

Alas, the number of The Beast came down, and No Mercy went up – which, as far as we know, is not even a Dante’s Inferno reference. Imaginably, even 20-odd years later, the move proved to be controversial. (Almost as controversial as the whole DMR name change, but more on that later.) Which isn’t to say Vincent was a bad guy. Quite the contrary – if it wasn’t for Vincent negotiating a loan from the United Bank of Denver in the early ’90s to keep the lifts running, there would be no ski trail names to argue over. To top it off, when investors got jittery, he even refunded their money, which was not exactly pocket change.

“Vincent was a great guy but ... but of course, everyone liked 666, so there was some resentment,” said Hards. “That never really went away.”

“I may have alluded to (changing the name) over the years,” said Kemler, who’s skied Purg for 40 years and spent 21 years working there in various capacities before retiring last year. “I don’t know if that was enough to get the ball rolling, though.”

But like a giant snowball gaining speed, roll it did. Kemler, along with other old schoolers, praised the move to banish No Mercy to the depths of hell.

“There was a lot of squawking over the years to bring it back and James bought it back,” he said.

Alas, Kemler, 65 – who received a lifetime ski pass for his service – has yet to ski the notorious bumps of the new old run.

“My knees don’t like to do that anymore,” he said.

Fellow old-timer “Dirty” Don Hinkley, who spent 33 years on Purg Ski Patrol, concurred with the move to reinstate 666. He had heard nothing about the name change until he spied the sign from the chair last week. “I always liked the name 666, I could spell it,” he said.

Perhaps another ghost of Purg past that may be happy to see the return of 666 is the fabled ski patroller known as “Sixes” (who we’ll also call Mike, because that’s his name.) According to ski bum lore, one night during sweep, as the tale goes, he hunkered down on 666, even going so far as to build a small fire, while awaiting his companion patroller. See, like beavers, wolves and shingleback skinks, patrollers on sweep partner up for life, or at least till darkness do they part.

Of course, Dirty and other ski patrollers remember things a little differently.

“Mike missed his checkpoint at Phone 6,” former patroller – and the only person interviewed for this story without an obscure nickname – Bethany McManus told us. Bear in mind, this happened before the days of cell phones or even radios. Patrollers had to call in via old World War II surplus phones located around the mountain. “He was a rookie, so he was ‘razzed’ – a World War II word – and given the name Six.”

Alas, such common sense is not the stuff of ski area legends, which can grow larger than life. Much like the “666” scrawled into the trailside aspen all those years ago. (Incidentally, the Telegraph does not condone defacing trees as a form of civil disobedience.)

And it is these legends, sometimes maybe just a little embellished, that Coleman has sought to keep alive since he first skied and fell in love with Purg in the ’80s as a teenager.

Either that or the devil made him do it.

“James has that nostalgia in him,” said Hards. “He probably got wind from some old standing locals – he skis with Major (Lefebvre) a lot. He hears something and makes the change.”

Case in point: the ill-fated “DMR” logo, which Hards admits to never really liking. It was among the first to receive the Coleman heave-ho in favor of the retro, red and white triple-flag (or is it upside down mountains?)

As for the trail signs, he said the rest of the mountain’s signs will be phased in over the next few years. What that entails is anyone’s guess – maybe a return of the “No bota bags” placard on the Dante’s door? 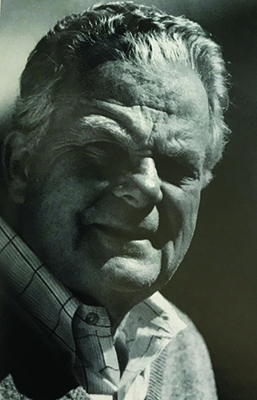 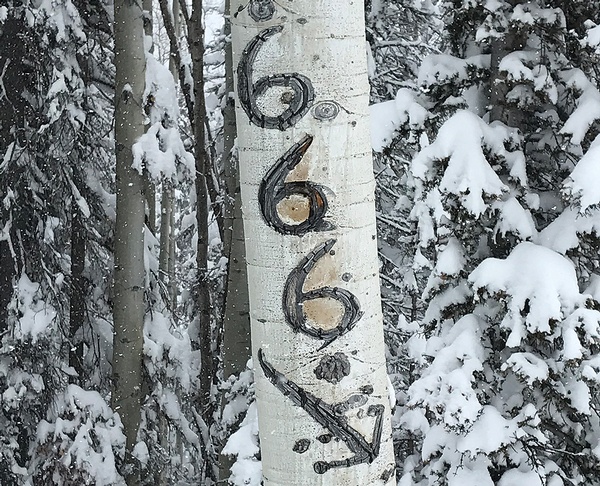 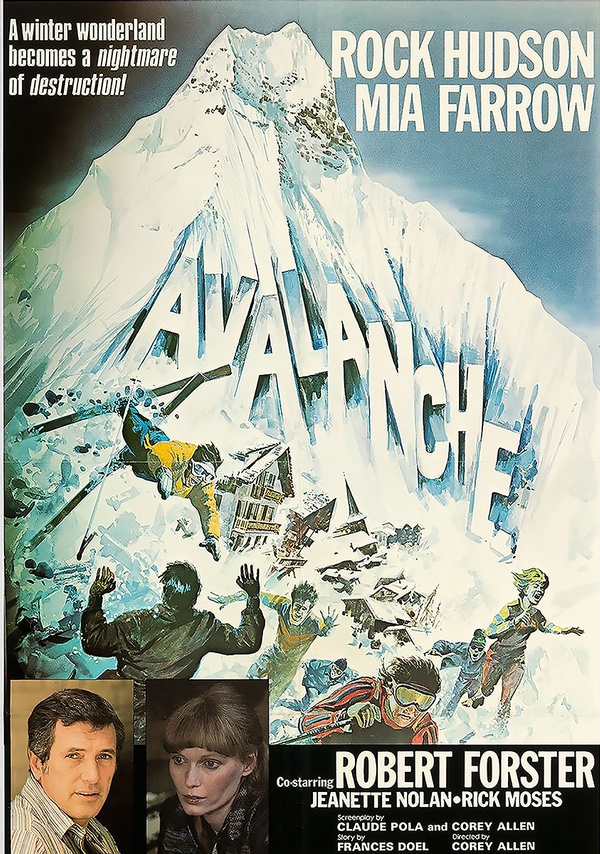 2. What’s in a name? Many trails are named after founders, employees, shareholders and notable locals. While Chet’s, Ray’s Ridge or McCormack’s may be self-explanatory, some of the more obscure trail namesakes include: The Bank (Bank of Durango and former owner Nick Turner, who financed much of the initial work); Crazy Joe’s (named after a log skidder who was said to do “unbelievable work with his equipment”); Mercy (prominent Durango doctor Dr. Pat Luter); and Zinfandel (for Duncan’s newfound career as a vintner.)

3. Othercast-offs: In addition to 666, other trails that underwent name changes include Damn If I Know (now BDM Expressway) and Swire’s Gulch (now Demon.)

4. Where the elk roam: Elk once frolicked freely in Hermosa Park. Not only is Wapiti named for the Native American word for “elk,” but Dead Spike was named when trail crews found a dead spike (young elk) and Bull Run came from a bull elk that ran across the trail when it was being cut.

7. Pass the sauce: A “Riblet” is not just a tasty treat at Applebee’s but the company that built many of Purg’s original lifts. Once the world’ biggest chairlift manufacturer, the Spokane-based Riblet Tramway Co. operated from 1908-2003 and is known for its style of chairs with a middle pole separating the two seats. The resort’s most vintage example of this is Chair 2, aka Engineer.

8. Jibbers welcome: Purgatory was one of the first resorts to welcome snowboarders – they had to get special “certificates” from ski school to show they were qualified to ride safely. Purg’s first halfpipe, the “Trick Ditch,” was built in 1986 under Lift 2. #bringbackthetrickditch

9. Starstruck: The 1978 movie “Avalanche” was filmed at Purgatory and starred Rock Hudson, Mia Farrow and none other than local champion gelande jumper “Dirty” Don Hinkley, who did the stunt skiing and jumping