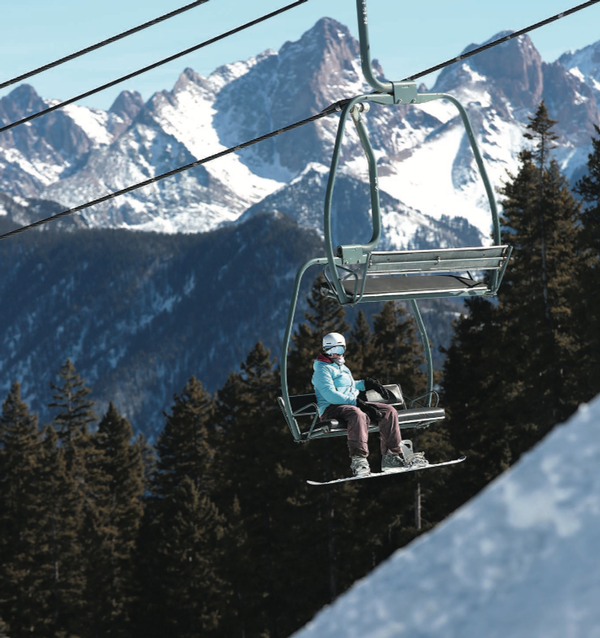 A lone snowboarder rides the lifts at Purg during the dismal 2017-18 snow year. Although this season was much better, snowsport and outdoors industry leaders are hedging their bets against climate change with the newly formed Outdoor Business Climate Partnership. The goal of the group is to lobby for bipartisan approaches, particularly carbon fees, to help slow or reduce climate change./File photo

In early February, the newly formed Outdoor Business Climate Partnership faced its first test, and its response made some people cranky.

Apparently, the president of the International Ski Federation, Gian-Franco Kasper, had dismissed climate change in an interview with a Swiss newspaper. “To everyone who approached me shivering, I said ‘Welcome to global warming!’” Kasper reportedly told people at the PyeongChang Olympics.

Kasper was showered with denunciations. However, the trio of industry heavyweights that had recently partnered to seek climate change solutions – the National Ski Areas Association, Snowsports Industries America and the Outdoor Industry Association – remained mum.

“We didn’t feel that we needed to come out and have a social media attack on him,” Chris Steinkamp, of the Park City-based Snowsports Industries America, or SIA, said. “That’s not our role.”

So what, exactly, is the partnership’s role? At least in its early phase, the group is making the case for climate change not just as an existential threat but a business opportunity. The emphasis is on finding bipartisan common ground through conversation. Putting a price on carbon emissions to accelerate innovation is among several ideas touted.

Members of the Partnership descended on Washington, D.C., late last month for a lobbying blitz. Orchestrating the effort was the much larger Ceres Policy Network, a Boston-based nonprofit that has more than 50 members, including companies like Microsoft, Ben & Jerry’s, and Kaiser Permanente.

A particular focus for the group in Washington is the bipartisan House Climate Solutions Caucus. Like Noah’s Ark, it requires membership in pairs: a Republican for every Democrat. In the last election, it lost 20 Republicans and hence 20 Democrats. The total membership in the caucus slimmed from 90 to 50.

The climate partnership can claim to represent a hunk of the $837 billion outdoor recreation industry. Largest among the three member organizations is the Boulder-based Outdoor Industry Association, which proclaims itself the voice of the outdoor recreation industry. Members include more than 1,200 manufacturers, retailers, distributors, suppliers and others from across the country.

“We need to bridge gaps and find common ground, and hopefully this partnership can find those common grounds and bring business voices to (achieve) solutions,” Andrew Pappas, of the OIA, said.

That may sound hopelessly nai?ve. Climate change has become a partisan issue. President Trump has called global warming a hoax and done everything in his power to bring back coal and stall efforts to decarbonize. Given this backdrop, can this new coalition really hope to make headway?

One blueprint for achieving action, said Pappas, is the reauthorization of the Land and Water Conservation Fund. Funding remains missing, although a bill with bipartisan support proposes to make funding permanent.

SIA’s Steinkamp thinks there’s a way over the partisan divide as well. The reality of human-caused climate change is accepted by people on both sides of the aisle, he says. What remains absent is consensus about the need for an immediate response at the federal level.

Steinkamp and other members of the group want to emphasize that major action now will avert the worst damage of the future. Think spending $1 today to avoid spending $10 in a few decades.

Take the ski industry. Low-elevation ski areas will see the most trouble. Whistler already gets lots of rain at the base area in winter. Rocky Mountain resorts, being higher and more inland, will likely have snow well through the 21st century. But the warming climate will continue to shorten the ski season, and January rain will become more common.

As well, climate havoc may erode the affluence that allows people to take ski vacations in the first place.

This gloominess, though, will not be the entre?e of the partnership. Rather, the talk will be primarily of silver linings: opportunity for economic growth in ways that reduce climatic and hence economic peril. The partnership isn’t married to a specific policy, but the goal is to decarbonize the economy by 2050.

The climate partnership began coming together in discussions last autumn. Part of the impetus was the Trump administration’s rollback of energy and safety requirements, including the weakening of fuel efficiency standards.

It is hoped the new partnership can deliver synergies in reducing carbon footprints. For example, aggregated power agreements could provide renewable electricity, much as what Vail Resorts did by purchasing wind power from eastern Nebraska. In making efforts to reduce their own carbon footprints, members will be able to add credibility to lobbying efforts, Geraldine Link, of the National Ski Areas Association, said. “We are optimistic that we can at least begin a dialogue.”

The last significant climate change legislation in Congress was in 2009. Called the Waxman-Markey Bill, it would have instituted a cap-and-trade system, forcing innovation by effectively limiting emissions. Congressional members from farm and coal states sank the legislation.

The delegation aims to entertain conversations with leaders in these states, particularly Wyoming, which produces 41 percent of the country’s coal. Given coal’s slide in recent years, the conversation may not be that difficult to approach. U.S. coal production fell to the lowest level in 39 years in 2018, according to the Energy Information Administration.

“Warning bells are ringing across Wyoming’s Powder River Basin that the largest-producing coal region of the country is in big trouble,” Heather Richardson, of the Casper-Star Tribune, reported in April. “Wyoming made its peace with the idea that coal’s best years were likely behind her, but that a more modest future for Wyoming coal, with manageable losses over time, was also likely,” Richardson added. “That may not be the case.”

Nevertheless, the Outdoor Business Climate Partnership is still being invented. If there’s agreement on the need for carbon pricing, it’s not the singular goal. A carbon tax in France yielded the yellow-vest protests. Government also must foster alternatives, such as cleaner cars. But the most important thing is joining of singular voices into one.

“Getting the trade groups behind climate change is something we have been talking about for a long time,” said Steinkamp, “and it’s finally happening." 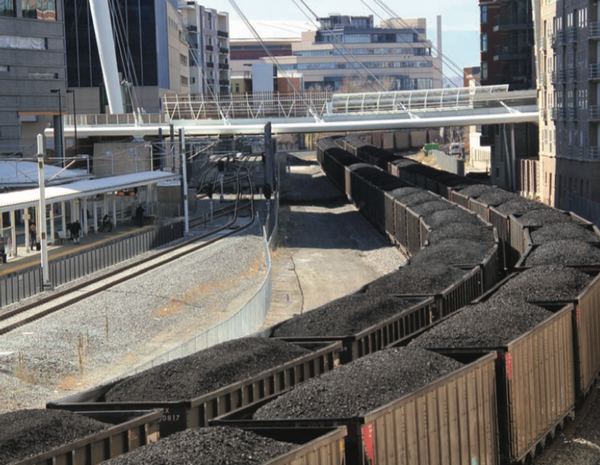 A train carrying coal rolls through downtown Denver. The Outdoor Business Climate Partnership seeks, among other things, to reduce the carbon footprints of its members through steps such as aggregated power agreements for renewable energy./Photo by Allen Best