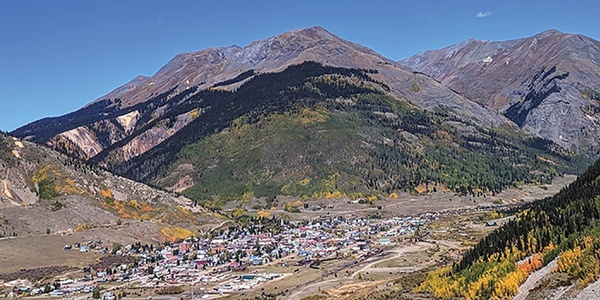 The area known as Baker's Park (aka Storm or Boulder mountain) outside of Silverton could be home to 30 miles of new singletrack under the BLM's latest Silverton Area Travel Management Plan. The trails were originally pitched by the Silverton Singletrack Society with the blessing of the town and San Juan County as a way to diversify recreational opportunities as well as economic ones./Courtesy photo

The plan to bring more singletrack to Silverton is rolling forward. Last week, the Bureau of Land Management announced the beginning of a 30-day public scoping period on its proposed Silverton Area Travel Management Plan. The plan, which covers 50,000 acres, includes 30 miles of new mountain biking and hiking trails in Baker’s Park, an area northeast of town also known as Storm or Boulder Mountain. The BLM plan also includes allowing motorized use on a portion of the Minnie Gulch Trail as well as a new 3-mile trail near Animas Forks; a new 3-mile foot trail near the Sound Democrat Mine; and formally designating about 25 miles of existing trails.

A public meeting on the draft plan will be held at 6 p.m., Thurs., June 20, at the Kendall Mountain Lodge in Silverton.

“Roads and trails on public lands are very important to the economy of Silverton and San Juan County,” Gunnison Field Manager Elijah Waters said. “This plan is an opportunity for the BLM to be a good neighbor by supporting local efforts toward travel management and responding to their vision for the future.”

In May, the Silverton Singletrack Society and International Mountain Biking Association released the Baker’s Park Concept Plan for the 30 miles of new trail outside of town. Supporters point out there are fewer than 10 miles of official singletrack in Silverton, and the new trail system would provide a much-needed boost to summer recreation opportunities and help diversity the town’s economy. Although the trails would be geared toward mountain bikes, they would be open to foot traffic as well.

According to the BLM, all new routes would require a formal trail maintenance agreement with an organization prior to being built, and continued use of the trails would be subject to satisfactory maintenance. The BLM would work with partners and granting organizations to secure funds to build the new trails.

Earlier this year, the Town of Silverton and San Juan County also approved a much broader and expansive trails proposal called the “Silverton Area Trails Plan.” In addition to the 30 miles of trail in the Baker’s Park area, the town and county plan also calls for several more new trails to be built over the next 30 years. However, those trails are not covered in the BLM’s latest proposal, although the BLM has left the door open for future discussion.

“There is not enough information to analyze the full town and county proposal in this document,” BLM spokesman Brant Porter stated. “However, the conceptual pods and trails in the Silverton Trails Plan would be analyzed in separate (environmental analyses) as proponents develop their proposals more fully.”

Porter said as far as the trails that are covered in the proposal, each would have to undergo its own environmental study prior to construction. He said the BLM hopes to have the plan finalized by the end of the year, with work beginning in 2020.

In addition to the trails contained in the proposal, the BLM is also seeking input from the public on other current and future transportation needs.

The BLM is accepting comments on the Silverton Area Travel Management Plan through July 5. To view the document or comment, go to the BLM ePlanning site at https://go.usa.gov/xm-Mab. Comments will become part of the public record.