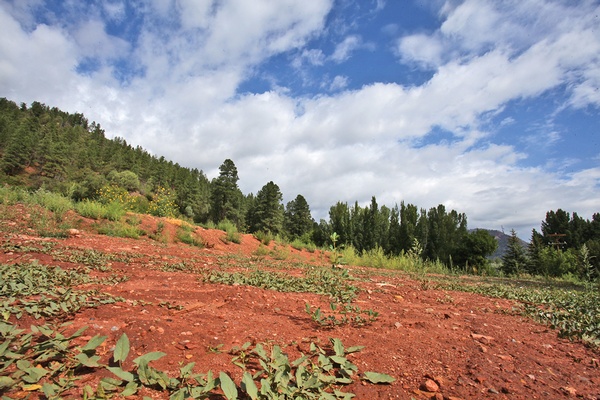 The property at 6559 County Road 203, pictured above, is zoned as 1-acre, single-family under the Animas Valley Land Use Plan adopted in 1994. Greg Yucha, who runs Veracity Construction and currently owns the lot, asked the La Plata County Board of Commissioners to approve his request to rezone the property multi-family to match nearby lots, where mobile home parks currently sit./Photo by Stephen Eginoire

It was a bit of a fact-finding mission for Greg Yucha. An opportunity to get feedback and find out what the La Plata County Board of Commissioners might want to see in the future.

At Tuesday morning’s commissioners meeting, Yucha asked the three-member board to consider rezoning a portion of 15 acres that he owns on the north end of County Road 203 from single-family residential to multi-family.

Because county employees with the Planning Department didn’t support the change and the Planning Commission previously voted 4-1 against the request, Yucha wasn’t under the impression that this board would suddenly change course.

Under the current zoning, Yucha, owner of Veracity Construction and Yucha Investments, can build up to 27 residential units on one part of his property, and five single-family homes on another – for a total of 32 units. If the zoning change is approved, he’s looking at a more evenly spaced neighborhood of 35-40 affordable units spanning both portions of the property.

“Thirty-five to 40 units would provide wiggle room for affordability,” he said.

Or, he could build several large, more expensive homes on the property without any change to zoning. “All that really does is rule out the lower-income people,” he added, “which is unfortunate.”

Yucha said affordable housing is important to him, and with that in mind he has brought a new idea to the table. Well, not necessarily a brand new idea.

“It gives people the option to live in a stick-built home that will appreciate,” he said. “And, it gets them the chance to buy the land.”

Once equity is built with the home, the owner might be in a better position to buy the land – which is the real issue, according to Yucha.

“It’s the land price,” he added. “That’s what keeps people from buying a house.”

Yucha said his goal would be to keep the cost of the home to about $120,000, which is doable both from a construction standpoint and for those in need of affordable housing. The target price for the lot would be around $125,000.

One of the issues moving forward would be finding a financial institution willing to work with potential homeowners. Yucha has had some initial conversations with First National Bank of Durango, but at this point nothing is concrete. It’s still only an idea – but one he’s enthusiastic about.

Earlier this year, Yucha first contacted neighbors about the possibility of development on his property. Since then, it’s been met with some controversy.

Much of the debate came with the announcement that the mobile home park – which currently sits at the north end the property – would be expanded, an idea that was also mentioned at Tuesday’s meeting.

Yucha, however, said that concept is no longer on the table.

In a letter sent to neighbors following a community meeting in February, Yucha wrote, “Due to tremendous push back, I will no longer be looking to expand the current mobile home park.”

This was a point he repeated Tuesday – he’s no longer considering mobile homes. The ideas still on the table include building single-family homes, duplexes, triplexes  and other smaller residences that would lend themselves to affordable neighborhoods.

“Unfortunately, as the density drops, so does the affordability,” he explained.

Yucha’s request to increase density by rezoning the single-family residential area to multi-family was first considered by the county’s Planning Commission in May. During that meeting, residents were mixed on the project.

Those who supported the request, including a local teacher and educator, spoke about how difficult it is to find affordable housing in Durango. Others, including a local business owner, commented on the problem of finding and retaining employees who face those same challenges.

This particular challenge – finding and retaining employees – is one of the reasons Yucha began this journey.

“It comes from the fact that my employees can’t afford land,” he explained. Yucha said half of his six employees live in Aztec because of the difficulty finding affordable housing in Durango. The others rent, paying more than $2,000 per month, all of which is not being saved and not allowing his employees to work toward homeownership.

Residents opposed to Yucha’s proposal expressed concerns with continued development in the Animas Valley, increased traffic along County Road 203 and a desire to adhere to current zoning requirements. Many of these concerns were repeated at the Board of County Commissioners’ meeting.

“We’re tired of new development,” Marie Roessler, who lives in the Animas Valley, said at Tuesday’s meeting. Changes to zoning in the Animas Valley are not unprecedented. Jason Meininger, La Plata County Planning Director, said Tuesday that in the past couple months two other requests for zoning changes in the area have been approved.
Ultimately, the County Commissioners voted 2-1 to deny Yucha’s request. Commissioners Gwen Lachelt and

Julie Westendorff voted against the request, and Commissioner Brad Blake voted for it.

But, Yucha plans to return to the county next year.

One thing he said he learned from Tuesday’s meeting was that Lachelt and Westendorff were particularly concerned with what’s called a debris fan on one portion of the property from a previous drainage cutting through the nearby hillside.

According to county staff, it’s unknown if the debris fan mapped for commissioners at Tuesday’s meeting was accurate or if the area in question could produce any future hazards.

These answers are commonly addressed during the next part of the planning phase, in which the developer goes through the permitting process and an analysis of the site is completed.

However, ahead of the vote Tuesday, Lachelt and Westendorff expressed specific concerns because of the recent flooding that caused major damage at the north end of the Animas Valley due to runoff from the 416 Fire.

After hearing their comments on potential flooding and debris flows, Yucha said he plans to get through the winter

and allow the subsequent spring runoff to play out. This would give everyone a chance to witness any potential for flooding or debris flows.

He also plans to pay for a geotechnical report which would include having experts examine the property, debris fan and address any concerns raised by commissioners.

“I think the need for affordable housing is too great,” Yucha said. “We want to resubmit (our proposal).” 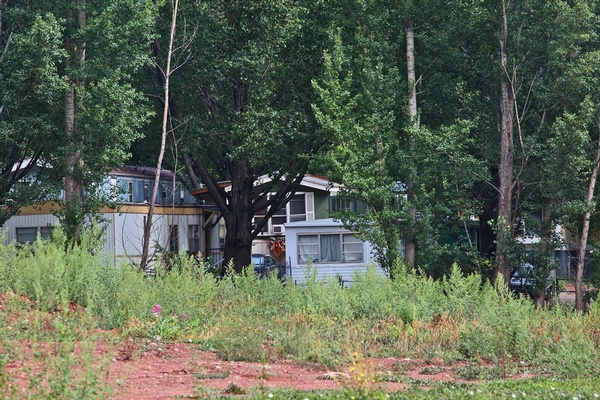 Greg Yucha, owner of Veracity Construction, currently owns two mobile home parks, pictured above, at the north end of County Road 203. As part of his proposed development, he plans to redevelop the parks and remove the mobile homes./Photo by Stephen Eginoire