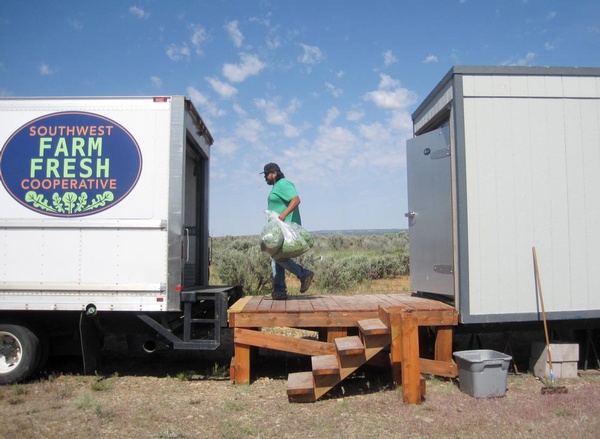 Southwest Farm Fresh Cooperative delivery driver Mark Llamas transfers bags of fresh greens from the office/walk-in cooler to the delivery truck. Thanks to a $229,000 USDA grant, SWFF will be able to expand its CSA offerings to more area residents with increased storage space, staff and trucks./Courtesy photo

The growing season may be coming to a close in Southwest Colorado, but potential for farmers and producers is only getting started. Two area organizations recently announced an infusion of federal grants to help get more local food onto local plates.

Earlier this month, the U.S. Department awarded a $229,000 grant to Cortez-based Southwest Farm Fresh Cooperative as well as a nearly $356,00 grant to a local food-gleaning effort headed up by Durango’s Local First. The USDA has designated the region “food insecure” and prioritized it for funding to help grow and distribute more local food.

The SWFF Co-op will use its money to help expand its community supported agriculture program, or CSA.

“This is a huge deal for us, to be able to serve more of the general public,” Co-op General Manager Ole Bye said.

The upgrades will be implemented over the course of three years and include additional staff, rent and upkeep of facilities, trucks and a new walk-in cooler. Bye said the Co-op is also closing in on leasing a new warehouse in Cortez which will house the cooler as well as dry goods, equipment and other supplies.

The Co-op, which started in the spring of 2014, is member owned by 17 regional farmers and producers within a 200-mile radius. “It’s growing really quite rapidly,” he said. The Co-op is special in that 100 percent of every dollar spent goes directly to farmers, he added. “This unique model gives small farms an advantage in the marketplace by pooling resources for marketing, distribution, bulk ordering of supplies, and other benefits,” he said.

Right now, the Co-op has 64 members for its 16-week summer CSA, mostly in Durango, but Bye is hoping to grow that number and expand to even more areas in the next few years. “We’re hoping to increase that number by several fold,” he said.

In addition to facilities and staff, the grant will also be used for outreach and marketing, to make area residents aware of the service.

Local First will use its funds to help coordinate local fruit-and vegetable-gleaning efforts. Known as the “Durango Regional Food Recovery Hub,” the collaboration will put excess locally grown food to use, feeding low income and underserved residents. “We’re talking thousands and thousands of pounds of local food that otherwise would go to waste,” Local First Director Monique DiGiorgio said. She wrote the grant with the help of the Bozeman, Mont.- based American Independent Business Alliance, or AMIBA.

And while part of the effort is to put food into human mouths, the other part is to keep it out of the mouths of bears, which could go on to become problem bears.

One of the main things the grant money will be used for is a full-time, year-round Hub coordinator, who will work out of the Local First office. DiGiorgio said the coordinator will be tasked with more than picking up plums. “He or she will be organizing and coordinating the complex pieces of the puzzle with six different organizations,” she said.

Among those pieces is a new app to connect excess food sources with “rapid-response” gleaning crews. According to DiGiorgio, time is of the essence during harvest, to keep food from rotting on the ground or going into the mouths of hungry bears.

Distribution will be another part of the puzzle, with the grant also going to help lease a refrigerated truck for transport and distribution. The Hub is hoping to work with Durango High’s Farm to School Aggregate Center on processing and storage. The center has a cooler which, incidentally, was funded by with a separate USDA grant. “It’s a complex web of interconnectedness,” Digiorgio said, adding that the job is posted on the Local First website (www.local-first.org.)

The grant builds on past years of gleaning work by the FLC Environmental Center, Bear Smart, CSU Extension Office, Garden Project of Southwest Colorado and Healthy Community Food Systems, all of which will partner on the Hub. New partners include School District 9-R and Cooking Matters.

“Years of good work culminated in the submission and approval of this proposal,” DiGiorgio said. “Local First is pleased to be working with this incredible group to build the relationships, connections and capacity. The benefits to our community will be tremendous.”

However, she added, funds are still needed for food recovery efforts between now and Jan. 1, 2018, when the grant kicks in. To donate, visit www.fruitglean.org.

For more info on Local First of SWFF Co-op, go to: local-first.org or www.southwestfarmfresh.com.