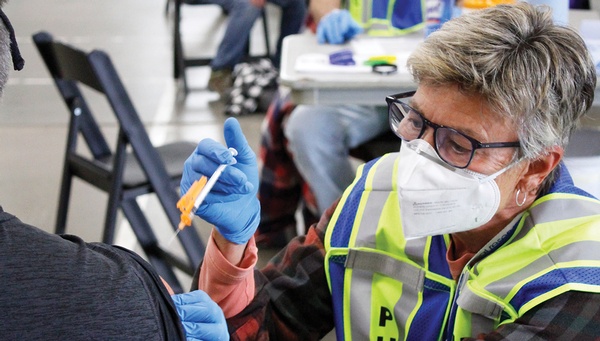 Archuleta County has had longstanding issues with San Juan Basin Public Health over the delivery of public health services. The COVID-19 pandemic, however, exacerbated those issues after the county took issue with regulations over business shutdowns, mask requirements and vaccines./ Courtesy photo

After a significant vote last week, all signs point to the dissolution of San Juan Basin Public Health, the public health agency that serves both La Plata and Archuleta counties.

In a unanimous 3-0 vote, with the backing of SJBPH’s Board of Health, La Plata County commissioners directed staff to continue to explore the disbandment of SJBPH and forming La Plata County’s own health district.

The move is in response to Archuleta County commissioners, who first threatened to disband SJBPH in summer 2020 over COVID-19 regulations. However, Archuleta County has had issues with the health district for years. In 2021, Archuleta County launched a citizen-led committee to examine SJBPH’s operations and the possibility of forming its own district to have more control over local public health services.

Concerned by the rhetoric and deteriorating relationship, La Plata County also began to scrutinize the partnership and realized that it was paying for more than its share of services. Now, it appears the county is moving toward forming its own district.

“Archuleta County often gets more than its fair share,” Shere Byrd, president of SJBPH’s Board of Health, said. “But their assumption has always been that they’re being cheated. Where that comes from, I cannot tell you.”

In recent weeks, upon hearing news of La Plata County’s move to dissolve the health department, Archuleta County commissioners have reversed their position. They are now asking to put the brakes on disbanding SJBPH, recognizing their small county may have trouble running and affording its own public health agency.

“I understand there’s been historic relationship issues,” Archuleta County Commissioner Warren Brown told The Durango Telegraph. “But I think it’s worth the time and effort to make this a workable situation for both counties.”

It appears that sentiment may have come a little too late.

Per state law, every county in Colorado is required to have a public health agency, which is tasked with delivering services such as early child care assistance, preventative health programs, and radon and water quality testing, to name a few. However, it’s fair to say most people don’t know about SJBPH unless they used these services or were familiar with the more well-known programs: restaurant and septic inspections.

That changed with the COVID-19 pandemic, which thrust public health into controversy. The case was no different for SJBPH. The regional health department (which followed state and federal guidance and mandates) was continually criticized by some for regulations surrounding the pandemic, such as restaurant shutdowns, mask requirements and vaccines.

For many, SJBPH was seen as public enemy No. 1, and, as in most places across the country, people opposed to COVID-19 regulations in Archuleta and La Plata counties took protesting to new levels – standing outside the executive director’s house, threatening staff and bringing guns to public meetings.

Short End of the Stick

Archuleta County’s issues with SJBPH, however, predate the pandemic. Archuleta County Commissioner Alvin Schaaf, who has been one of the most vocal critics and serves as the county’s liaison to SJBPH’s Board of Health, did not return requests for comment. Schaaf lost his bid for reelection in the Republican primary in June.

When contacted last week, Archuleta County Commissioner Ronnie Maez said, “I don’t see a reason going into the details; it doesn’t matter what we say now,” and that this story should have been written two years ago. (As an aside, when I was a reporter for The Durango Herald writing on this topic two years ago, Maez declined to comment).

But based on old meeting records and Pagosa Springs Sun news reports, it seems Archuleta County has always perceived that it was getting the short end of the stick when it came to services (Schaaf has previously referred to Archuleta as the “step-child” in the partnership).

Getting to the truth of this sentiment, however, is complicated, Byrd said. Each county uses different programs at different rates. Despite making up only 20% of SJBPH’s service population, Archuleta accounts for about 35% of communicable disease investigations, yet only 11% of child care inspections. But, at the end of the day, SJBPH officials are adamant that not only does Archuleta receive its part of 80-20 services, it actually comes out on the winning end.

What’s more, Archuleta has always wanted more control of SJBPH’s budget and programs. One of the biggest issues has been the cost of septic inspections. Because of new state laws, the cost for permitting and building septic systems shot up, especially in rural areas, which, not uncoincidentally, are the most affordable places to build in Archuleta.

“Why does it have to be so expensive for people?” Maez said. “I understand it’s set by the state, but are we looking at all our options to reduce the cost?”

In March, SJBPH’s Board of Health adopted a fee waiver for septic system permits for low income property owners.

In the past, SJBPH health officials have called the relationship with Archuleta tense, corrosive and even hostile – and then the pandemic hit, exacerbating these longstanding issues. Archuleta constantly found itself at odds with COVID restrictions and even voted to enact different guidelines than those recommended by the health department. When asked about specific issues on COVID, Maez replied, “I have no comment on that.”

Ultimately, Archuleta County formed its citizen-led investigation committee to see if it should start its own health district. The group met nine times from August - December 2021. Upon reviewing the minutes, the committee never recommended whether or not to disband SJBPH. Instead, it appeared to explore basic questions: What is a public health agency? What does SJBPH actually do?

LaVonda Bass, a Pagosa Springs resident who served on the committee, said all the information was presented to Archuleta commissioners, and it was recommended the county conduct a full community survey of whether to start a county health district. But the commissioners never acted, Bass said. She believes Archuleta would be better off without SJBPH.

“You have to understand, this is a Republican county, and many people did not like SJBPH coming over here trying to enforce Democratic views,” she said. “That was a major issue.”

Archuleta County is not alone in this belief. Tri-County Health Department, which served Adams, Arapahoe and Douglas counties (also for 70 years), is set to disband at the end of 2022, citing irreconcilable differences over the pandemic.

As the relationship between Archuleta and SJBPH continued to deteriorate over the past two years, the delivery of health services was impacted, Byrd said. In April, SJBPH’s Board of Health officially recommended the district be dissolved. A few weeks later, La Plata County launched its own effort to understand the ins and outs of forming its own district.

On Aug. 23, County Manager Chuck Stevens told commissioners that, while it would cost more money on the front end and certainly not be easy, a county-led health department would ultimately be more efficient and cost about the same. “It’s going to be a bit of choreography and a bit of a dance to make sure everything works right,” he said. “But if we can weather the storm, I think we can come out on par.”

La Plata County Commissioner Marsha Porter-Norton, who also serves as county representative on the SJBPH Board of Health, reiterated the “corrosive relationship” with Archuleta has hampered public health services. She supported the move to continue exploring the disbandment of SJBPH.

“I’m not happy about it,” she said. “I have no joy in it. (SJBPH) has been around for 70 years, and this is a real bummer, but we have to look at it in a forward-thinking way.”

Despite proposing the idea first, it may be that Archuleta, which is smaller in population and budget, will have the most difficulty forming a new district. At the Aug. 23 meeting, Brown pleaded with La Plata County commissioners to put the brakes on dissolving the health district.

“I don’t believe Archuleta County is prepared financially to stand up a health department,” Brown said. “It’s going to be a substantial struggle for Archuleta to bring these services.”

Brown and Maez, in separate interviews with The Telegraph, both maintained they haven’t received a breakdown and full understanding of SJBPH’s services to Archuleta County. And, it should be noted, the two counties have never held a joint meeting to talk about the issues (and no plans for one are in the works). Paradoxically, though, threats to disband SJBPH have now had the opposite effect of the commissioners becoming advocates to keep SJBPH together.

“I see no reason in beating this horse, because this horse has left the gate,” Maez said. “Unless La Plata wants to come to mediation of some type; I’d be willing to do that.”

Schaaf, too, has reversed course in recent days, saying he would welcome talks with La Plata County to keep SJBPH intact, according to a report in the Pagosa Springs Sun.

With the Aug. 23 vote, La Plata County will now take the next 18 months to further develop a plan for dissolution, which is no simple task. Indeed, SJBPH is a complicated web between the two counties involving funding and services that will be difficult to disentangle. The desired route, La Plata officials say, is to work with Archuleta in the process and have no gaps in public health services.

And therein lies another core matter in the issue: SJBPH serves some of the most vulnerable people in the community: new moms struggling financially, teen-agers in crisis, those fighting opioid addiction. Many times, these people are in the shadows, unable to sway political fights in local government.

“My fear is the people that regularly receive SJBPH’s services are going to be the ones that suffer the most,” said Brown, who was elected in 2020. “Above the posturing and all this business, at the end of the day, that’s my primary concern.”

Byrd agreed: “It’s super sad. The Board doesn’t want to leave Archuleta County high and dry without a health department. But they initiated this, and they need to follow through. It puts the onus on their elected officials to meet the needs of people in their county instead of having them just criticize (SJBPH).”

Before the pandemic, public health usually operated in the background, quietly performing public health services and meeting health care needs of people who can’t afford it. But COVID-19 changed all that, and it appears there’s no turning back.

“We, as Americans, in the past, have always rallied together around a common external enemy, and a virus is an external enemy,” Dr. John Bruss, a SJBPH Board of Health member, said at a work session in early August. “But we allowed our differences in politics to divide us, and we lost.” ?