Sequestering superhero
When it comes to combating greenhouse gas, one need only look in the trash 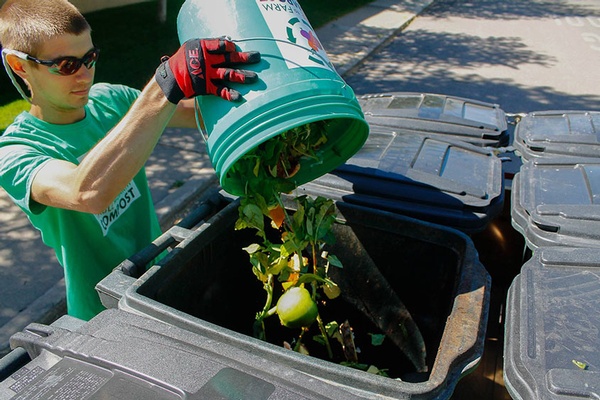 It may not be sexy, but composting food scraps can save millions of tons of food from the landfills and cut methane emissions. Landfills currently account for 17% of the country's methane gas emissions./ Photo by Table to Farm Compost

In the fight against climate change, one superhero sidekick is not getting the full recognition it deserves. Despite working diligently every day to combat greenhouse gas emissions, it remains mostly underappreciated worldwide.

With Earth Day just around the corner, let’s take a moment to shine a light on this unsung hero whose superpowers are threefold. Not only does it divert tons of methane gas from entering the atmosphere, but it also assists in capturing carbon dioxide, the principal greenhouse gas culprit, and transforming it into carbon – the energy currency utilized by all biological systems on the planet. All this while adding nutrients and increasing water retention in the soil, minimizing the need for herbicides and pesticides, and contributing to healthier, more resilient plants, crops and gardens.

But why is it so important? According to the Environmental Protection Agency, in 2018 alone, Americans threw away 103 million tons of food scraps, sending them directly to the landfill. Here in Durango, we send around 1,300 tons of food waste to the landfill annually. Once there, these food scraps and other organic materials are buried deep within the landfill in an oxygen-deprived environment. In the absence of oxygen, this organic waste releases methane into the air.

In the U.S., around 17% of our methane emissions come from landfills, more than coal mining and livestock manure combined. As methane has approximately 25 times greater heat-holding capacity than carbon dioxide and contributes significantly to further planetary warming, this is bad news.

But here’s the good news: something simple can be done with minimal effort to combat this. And it costs way less than a Tesla. Yes, I’m talking about composting again. Every banana peel, eggshell and sundry that we compost instead of throwing in the trash can help transform what would inevitably become methane emissions into a powerful tool for growing plants while also assisting in the removal of carbon dioxide from the atmosphere. In other words, we’re recycling carbon in the carbon cycle where we and the Earth can benefit from it indefinitely, rather than releasing it into the air as methane gas.

Table to Farm Compost co-owners Monique DiGiorgio and Taylor Hanson, in partnership with the City of Durango, are working together to get the word out on the vast benefits of composting and the concept of “carbon farming.” Carbon farming describes the process of pulling carbon dioxide from the air and sequestering it into soils and plants through regenerative agricultural and gardening practices. This results in greater below-ground carbon storage via plants, fungi, soils and associated microbes. Basically, the soil serves as a carbon reservoir that can hold up to three times more carbon than Earth’s atmosphere.

Research shows that applying soil amendments, such as nutrient-rich compost, only enhances this process. A report released in 2019 that compared organic carbon levels in soil across various cropping methods found that lands treated with an application of compost and planted with cover crops had a significant increase in carbon content – all thanks to compost.

With Table to Farm’s plan to begin operations at its new commercial composting facility July 1 and the City of Durango’s goal of expanding community composting in the coming years, Durango is primed for greater participation in composting.

“Our current facility is at 1 acre and holds around 1,000 cubic yards of unprocessed material,” DiGiorgio said. “Our new, 4-acre facility will hold a little more than 18,000 cubic yards, so there’s significant room for us to grow.”

Table to Farm currently serves 560 residential customers and around six local restaurants. With the city’s approximately 5,200 residential trash and recycling customers within city limits and the number of restaurants hovering around 200, the potential to divert literally tons of food waste from landfills is huge. Of course, grocery stores play a big part, too. Durango’s Albertsons is currently composting its food waste with Table to Farm, and there’s hope that City Market north and south will soon join as well.

While the city explores what a city-wide composting service would look like and how it would help in reaching sustainability and greenhouse gas emissions goals, the city’s sustainability program manager, Marty Pool, feels a conscientious approach is the best.

“We are considering what the best route forward is with the end goal of providing community-wide organic waste diversion at a reasonable price,” he said. “But we also want to make sure the service is effective. Many other communities implementing similar programs have run into contamination issues, so we want to learn from these other communities as we move forward and keep people’s faith in the system intact.”

As community participation hopefully increases, so will the potential for contamination. The proliferation of “compostable” labeling on take-away/to-go cutlery, cups and other containers in the food and beverage industry muddies the waters even more.

Many are familiar with the BPI, or Biodegradable Products Institute, which assigns a compostable certification logo on to compostable products. But what sometimes gets missed is that these bioplastic products, made from corn starch, cassava and sugar cane (also known as polylactic acid or PLA), require very specific conditions found in only certain industrial composting facilities to biodegrade.

Currently, these bioplastic products cannot be composted in Durango, but thanks to the innovation of a few local businesses, including Live Creative Studio, Inner Joy Energy Bars, Zia Taqueria and Cream Bean Berry, and in collaboration with Table to Farm, a pilot study to test if these biodegradable to-go containers can be composted locally is in development, and funding is being sought.

As the concept of a “circular economy” – one in which nothing is wasted – gains traction, why not follow nature’s own circular model, the carbon cycle, by composting food scraps and other organic materials? Indeed, composting is the perfect role model for a closed-loop system where our food may continue its journey on the circular path indefinitely: grow, eat, compost, repeat.

On the heels of Durango’s Earth Day celebration Sat., April 23, at Rotary Park, is the beginning of international compost awareness week, starting May 1. Sponsored by the Compost Research and Education Foundation, this initiative strives to increase awareness around the many positive impacts of sustainable organics recycling. Perhaps there is no better occasion to start reducing your household carbon footprint by composting food scraps. It’s an easy way to support a livable climate while also helping the planet.

For more information on local composting, visit tabletofarmcompost.com. To get started composting in your own back yard, visit: www.ecocycle.org/backyard-composting. And to learn more about the compostable packaging pilot test, contact claire@livecreativestudio.com