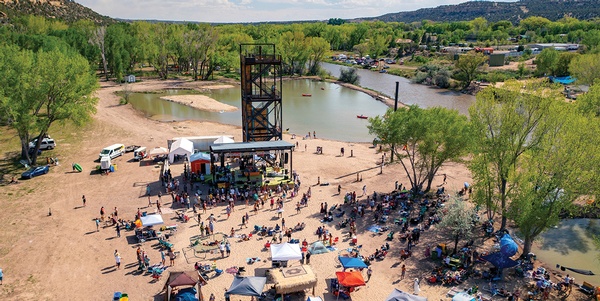 Out to prove you can have fun without substances, Tico Time River Resort, south of Durango, will put on a four-day festival packed with musicians, workshops, yoga and all kinds of activities./ Courtesy photo

A few years ago, Four Loko (yes, that Four Loko) surveyed nearly 2,000 people throughout 16 major music festivals across the country, asking what were the most annoying behaviors witnessed throughout the event.

Atop the list? Peeing outside porta potties, of course. Smelly bodies, duh (important: Pitchfork was ranked smelliest festival; take that hipsters!). PDA and “showing a lot of skin” were also mentioned, although we’re not sure what’s wrong with that. Talking during a set; that’s a gimme. And, not surprisingly, over-the-top drug and alcohol use, which likely plays a part in all these unbecoming behaviors.

Now, we’re not here to pooh-pooh alcohol and drug use, if that’s your thing. But, use of substances has become so dominant in our culture that most people couldn’t fathom the idea of having fun at a music festival without them (us included).

But Tico Time River Resort is here to challenge that notion. Beginning on Thursday, Tico Time will host Serenity Festival, a four-day, family-friendly celebration of wellness and sobriety. And it’s not just open to people in recovery – anyone who wants to enjoy a weekend of music, workshops, yoga and outdoor recreation without the use of substances are also welcome.

And it’s true, there does seem to be a growing movement of people choosing to abstain from alcohol and drugs (known by its buzzword, “sober curious”). Similar music festivals have been held across the country, and even alcohol-free bars are cropping up in cities, though you’d probably run into those smelly hipsters there.

For Tico Time owner Robert Holmes, hosting a sober music festival is personal. Holmes is a recovering alcoholic who also suffered from drug addiction but has been sober for 20 years. “A huge part of my journey has been showing people you can have fun sober,” he said.

Tico Time held its first sober music festival last summer, when it was called Sober Fest. That year, however, the event had a small budget and low turnout, mainly because of the inaccurate perception it was exclusively for people in recovery. This time around, Holmes said, organizers are trying to get the message out that Serenity Fest is open to all.

“It’s open to anyone who wants to have a fun weekend without drugs and alcohol,” he said.

Like many people in recovery, Holmes started using at an early age. By college, his addiction and destructive behavior had gotten so bad he was getting in trouble with the law and becoming a risk to himself and others. “I was doing bad things I would have never done sober,” he said.

At age 19, however, facing jail time, Holmes made a pledge to remain sober and went to rehab. He’s held true to his vow ever since. But one of the hardest things in recovery, Holmes said, was learning how to have fun and go to social events without drinking or taking drugs.

“So often in life, you go to a wedding, birthday party, anything, really, and people are drinking and/or using drugs, and to not take part makes you feel completely out of place,” he said. “I thought life wasn’t going to be fun anymore; I just couldn’t picture ever enjoying life again. But the opposite has happened.”

Consider it a challenge

It’s true – Holmes has learned to have fun at festivals, bars and parties without substance use. In fact, to celebrate one year of sobriety, he even threw a kegger for his friends. And, whenever he’s had the chance, he’s hosted sober events like campouts. But nothing on the level of Serenity Fest.

“It’s always been a dream of mine to have a huge sober party and really show people that it is possible to have fun sober,” he said.

Serenity Fest features a packed lineup of music from all genres – Americana, reggae, EDM – all with sober-oriented musicians with positive messages. On top of that, there will be a seemingly non-stop run of workshops, recovery meetings and yoga. Christy Grace, event producer, also said all of Tico Time’s usual offerings – kayaking, tubing, water slides, zip line, etc. – will be going on.

“There will always be several options going on at all times throughout the festival for people to experience different activities that are positive and uplifting,” she said.

Grace has attended and produced a number of music festivals in her time. But, she said, most are drunken affairs. Serenity Fest, on the other hand, challenges people to have a good time without substances.

“People don’t always want to be exposed to (the chaos of a music festival),” she said. “This is for anyone who wants to have a good time and challenge themselves to not partake in any mind-altering substances.”

Andrew Ecker grew up in a household where both his parents were addicted to drugs and eventually died because of their addiction. He, too, was headed down that path. While in prison for selling drugs, however, he said he had a spiritual awakening and realized he wanted to break the cycle and do something better with his life. Now, he’s 23 years clean.

Ecker will be at Serenity Fest to offer a community-focused, sober drum circle through his company Drumming Sounds, which he runs with his partner, Monica Patton. Ecker said there’s mounting evidence that music can help with wellness and mental health. And, he said, he’s walking proof.

“When I found my way to live a life of purpose and service to the community, I found drumming,” he said. “Now, we use drumming as an opportunity to start a conversation about mental health.”

Blaine Bailey, director of the Durango-based nonprofit In the Weeds, which offers support to the health of restaurant and hospitality staff, will also set up a tent at Serenity Fest. Bailey said substance abuse is a big part of service industry culture, and it’s not talked about enough.

“(A sober event like Serenity Fest) shows people they can still have fun without alcohol or drugs,” he said. “I’m not considered sober, but I know I used to not feel comfortable in an environment like a festival without a beer in my hand or taking a shot. I had to rebuild a positive relationship with events like that and get control.”

Sober music festivals have been cropping up in recent years. In Denver, for instance, the Sundown Colorado festival last year drew an estimated 1,000 people. This year, the event, which will be held Sept. 24, will feature live music, a meditation tent, wellness workshops and non-alcoholic beers and cocktails.

Attempts to reach event organizers were unsuccessful. But in a statement, one of the founders, Ashley Handby, said, “Sundown is on a mission to normalize healthy nightlife for those who are sober-curious, in recovery or who may want a different option for just tonight.”

Tico Time’s Holmes said, as it stands, ticket sales are not great for Serenity Fest. As a result, the event will likely lose money and may have to be put on at a smaller scale next year.

“It’s hard to get momentum with an event like this,” he said. “But we’ll have a decent turnout and put on an amazing experience regardless.”

Indeed, Tico Time’s other events have been well attended. The possible major X factor there? Drugs and alcohol.