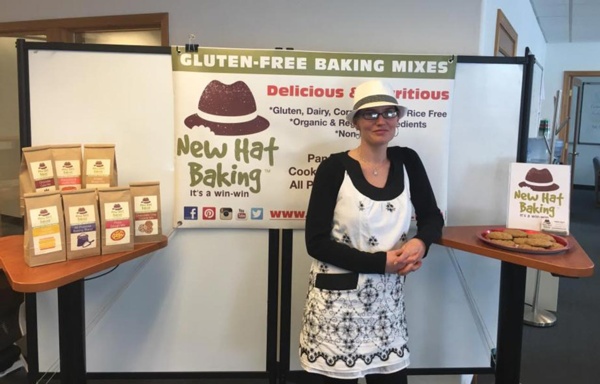 SCAPE graduate Amber Davis, of New Hat Baking Co., inside the SCAPE offices on Main Avenue. Davis came up with the idea for gluten-free baking products after her son was diagnosed with Asberger's Syndrome./ Courtesy photo

According to the Small Business Administration, almost half of new businesses fail in the first year. Considering that percentage, it’s a wonder anyone starts a business at all. Yet, entrepreneurship offers a promise of freedom and financial reward that can outweigh the risks. And fortunately, for local entrepreneurs willing to try to beat the odds, there’s SCAPE. The acronym stands for Southwest Colorado Accelerator Program for Entrepreneurs, and the nonprofit organization is a success in its own right.

Co-founders Jim Mackay and Gary Masner launched SCAPE three years ago after discovering they shared a vision on how to help companies get off the ground while also finding local investors. From their perspective, most gestating companies weren’t investor ready, meaning they didn’t have their team in place, skills to properly launch or even a plan with which to approach potential investors.

“We decided to put together a startup accelerator with the help of various entities around Durango that focused on economic development,” said Mackay.

Both men have had business success and bring a wealth of knowledge, experience and contacts to the table. Among other entities, Mackay also started Durango Tech, which brought together people working or interested in the local technology sector.

In essence, SCAPE’s concept is to grow business and the economy for the region, with an emphasis on Durango. Mackay became an advisor for the Small Business Development Center (SBDC), which is where he met Masner, who had an extensive background in enterprise financing, including stints as a venture capitalist. In 2004, he created the Growth Company Initiative, which includes a peer CEO Network, an “angel investor” group and a mentoring advisor group.

The collaboration led to the formation of SCAPE in 2013, with enough funding to hire Elizabeth Marsh as director. Local mentors also were recruited, including John Wolgamott, current chairman of the SCAPE board who has invested in some of the startup companies as well.

To date, 15 companies have been launched, 40 jobs created and more than $3 million in capital raised, with the majority being spent locally.

Amber Davis, president of the locally based New Hat Baking, is one such company that got a boost from SCAPE. New Hat, which creates gluten-free baking mixes utilizing a unique flour blend, first introduced its product at the Durango Farmer’s Market. A few months later, Davis made a successful pitch to SCAPE.? “First and foremost, they believed in me, our products, and the business concept, which gave me more belief in myself,” she said. “The capital investment was pivotal to get New Hat Baking to the place it is today: with branding, a professional website, and the ability to buy bulk ingredients at a lower price.”

Additionally, Davis said the mentorship helped her avoid costly mistakes. “Through learning the lean start-up model and how to complete accurate financial projections, we have been able to move forward with a bit more clarity,” she said.

Another SCAPE success story is Ellen Golden, creator of Pretty Cool®, a unique instant cold pack that provides hot flash relief for menopausal women. “When we first participated, our business was in the very earliest stages of development,” said Golden, who graduated from SCAPE in 2015. “We didn’t yet have a prototype or any investors and were just conducting a proof-of-concept study.”

With SCAPE’s help, Golden incorporated the business, developed a website, made her first order from China, and had her first sales. In the past year, she has grown from selling locally and on her website to selling on Amazon, in catalogs and being pitched to QVC.

In the three years since launching SCAPE, there have been more than 100 applicants to the program, with over a dozen coming from entrepreneurs outside the area looking to move here.

“We are looking for applications from early-stage businesses wanting to market and compete outside the local area while remaining headquartered in Southwest Colorado,” said Marsh. “Special emphasis will be given to those ventures with strong job-creating plans.”

The founders eagerly mention the financial support SCAPE has received from the Region 9 Economic Development District, which came in the form of a Rural Business Development Grant through the USDA. The funding helps pay for mentoring, office space and an equity investment, to help the new ventures enter markets and raise capital on their own.

Mackay commented that SCAPE has itself evolved in order to improve its chances of success. “We have extended the program from four to six months and have tailored the curriculum,” he said. “We have changed the way mentors are involved so that we don’t burn them out. We’ve also changed our selection criteria for the companies that we accept.”

Looking to the future, Mackay said the next challenge is to create a funding source for the graduating companies, as well as other local companies seeking capital. Mackay anticipates receiving 40 applications this fall. From those, SCAPE board members will ultimately select four to five companies to work with in 2017.

Davis, of New Hat Baking, summed up the value of SCAPE. “After all I’ve learned, we probably couldn’t have done it without the help of SCAPE, its amazing director, Elizabeth (Marsh), and all of the wonderful mentors’ excellent advice.?” 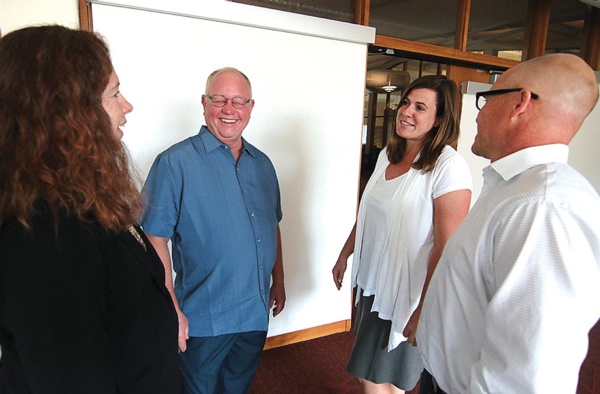 Elizabeth Marsh, SCAPE director, right, talks to a group during a recent SCAPE meeting. Since starting three years ago, the program has helped launch 15 local companies./ Photo by Jennaye Derge

What: 2016 SCAPE Start Up Showcase