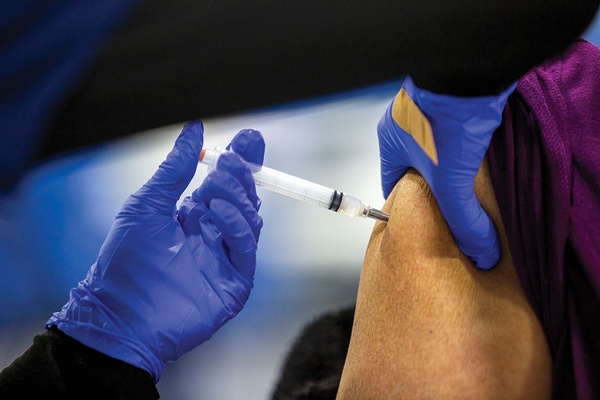 Yvonne Gutierrez gets the first round of a Moderna vaccine at the Denver Indian Center on Jan. 8./ Photo by Kevin J. Beaty/Denverite

Gov. Jared Polis announced Tuesday that he plans to add Coloradans aged 65-69 to the priority list for an early COVID-19 vaccination after the federal government recommended expanded eligibility for the shot.

The decision follows Polis’ earlier choice to make the vaccine available to anyone 70 and older, an announcement that triggered widespread questions and concerns because it was not accompanied by a distribution plan – or enough vaccine to cover the more than 530,000 people in that age category.

Polis also said the state’s distribution network was coming together, and that he would formally announce the expansion of the age group soon.

In La Plata County, the Community COVID-19 Vaccination Team – a group of 400 doctors and medical volunteers – is hoping to start holding weekly vaccine clinics for people age 70 and older by the end of the month. The clinics would be by appointment, and people would be scheduled according to the order in which they signed up for vaccination alerts from San Juan Basin Health Department (available at sjbpublichealth.org). The team expects to be able to inoculate about 350 people with their first round of the vaccine at the first event.

The governor indicated he wouldn’t follow other CDC guidelines issued by the Trump administration Tuesday that recommend people with comorbidities also be moved up the priority list. Under the state’s current plan, those with pre-existing conditions will be part of Phase 2 of the vaccination program.

Polis’ office later issued a statement clarifying that the state would wait to formally expand eligibility once it had a better idea of how much vaccine would be arriving and how it would be distributed.

"Colorado will not be making any changes to our vaccine program until we can get concrete details on supply quantities, timelines for receiving that supply and engaging our partners who are on the ground administering the vaccine," read the statement, which issued after 6 p.m. Tuesday. "While the state is not making any changes today, the Polis administration is actively planning how we can scale up and expand eligibility in anticipation for receiving more supply of vaccines."

Can the state avoid the same confusion that followed the first time it expanded its vaccine eligibility?

When the governor moved to expand eligibility last month to those 70 and older, Coloradans and health providers complained the change was confusing and resulted in hospitals unfairly giving the vaccine to some while forcing others to wait.

Health departments said they were forced to revamp their efforts to administer the vaccine.

“Sudden changes in guidance are a challenge to respond to,” Linda Smith, of the San Luis Valley Public Health Partnership, wrote in an email. “The upside is that the changes ... have mostly been good ones.”

Polis said the number of hospitals and health clinics offering the vaccine will expand as well. He said people affiliated with a hospital system will be contacted randomly for the vaccine or they can sign up. Some hospital systems, like UC Health, are taking appointments from people who aren't connected to a hospital.

Polis predicted all people 70 years old and up who want a vaccine will get one by the end of February. He didn’t say when vaccines for those 65 and over would be complete.

He said that timetable could be moved up if, as the Trump administration indicated, the federal government releases all the doses on reserve. He also said the process would be accelerated if new vaccines from companies like Johnson & Johnson and AstraZeneca are approved for use.

Focusing on ‘fair and equitable’

The governor said a key focus of the state’s vaccine efforts will be a “fair and equitable distribution.”

“That means geographic, it means by income, by race, all the different factors,” he said.

He said community health centers, which serve low-income Coloradans, were ramping up their vaccine efforts.

Salud Family Health Centers, which operates clinics in 10 different communities in Colorado, said it was offering vaccines to older Coloradans in all of its clinics and was turning its focus from seeing patients to vaccinations.

"The downside to that is not as many people are getting primary health care,” John Santistevan, Salud’s president and CEO, said. “But we are vaccinating more individuals, which we totally believe (is) the right thing to do.”

The vaccine rollout remains slow, but officials expect the pace to pick up.

Polis said currently hospitals, health centers and public health departments will do the bulk of vaccinations. Eventually, large-scale drive-through sites will take on much of the job as well as pharmacies and local doctors’ offices, similar to the way the flu vaccine is administered.

As of Tuesday, Colorado had received 516,750 doses of vaccine, according to the CDC, but distributed just 238,766, according to the state health department. That means more than half of the state’s allotment is here, but has not yet been used.

That places Colorado 12th among states ranked by the amount of vaccine they have effectively distributed.

Polis said some of that is the result of a slow rollout of the federal program to vaccinate nursing home residents and staff. But he also promised that the pace would pick up as more places, including health-care centers and doctor’s offices, started vaccinating their patients.

This story was edited to add locally relevant content. To read more from Colorado Public Radio, go to: www.cpr.org.