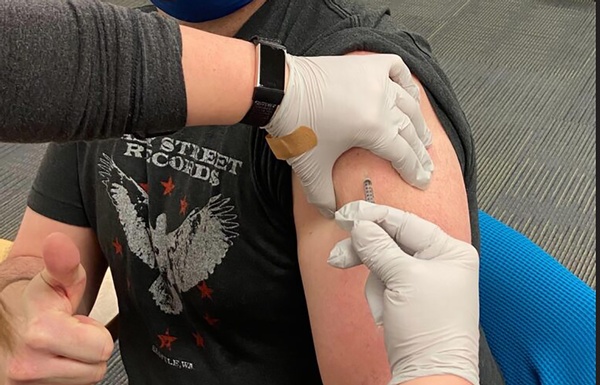 Dr. Dan Jones, of Denver, gets his first dose of COVID-19 vaccine Dec. 24, 2020. The second shot created side effects including headache, muscle aches and joint pain. However, his wife, also a doctor, did not suffer any side effects from her second dose./Courtesy photo

Dan Jones, 44, nursed a sore arm after his first COVID-19 vaccine, but other than that, he felt fine.  The second dose hit the Denver doctor like a Mack truck.

“About eight hours after ... I started to have symptoms like chills, headache, muscle aches and joint pains,” he said. “That night I did not sleep very well and when I woke up the next morning, I still felt pretty poor.”

Jones, of Denver, went to work anyway and felt better the following evening. But some of his fellow doctors and nurses felt even worse.

“(They) were unable to work after their second dose, so I think it is good to plan your following day so that you can be home if that's possible for you,” Jones said.

Like most physicians, Jones believes the benefits of the COVID-19 vaccine far outweigh those temporary side-effects and the potentially lethal dangers of contracting the virus.

The question is, how to explain this to those of his patients already hesitant to get the vaccine. Jones’ answer is to be upfront with his patients, even sharing the details of his own unpleasant experience “so that if they have reservations, we can talk through that.”

Jones said it’s not surprising that some people, especially minorities who have a history of distrust of the health-care system, would be fearful of a vaccine developed so rapidly when most vaccines require years to bring to the market.

“They have concerns about receiving the vaccine, mostly because of the newness,” Jones said. “They don't have a lot of information that didn't come from social media and other internet sources.”

To balance his own unpleasant vaccine experience, Jones sometimes shares the experience of his wife, Crystal Joy, 41, who’s a psychologist. Joy has received both of her doses of the COVID-19 vaccine; she had only a minor headache after the first shot which she said may or may not have been triggered by the vaccine. She felt fine after the second and went out for a 5-mile run that same day.

On the other hand, Joy said, her husband’s side-effects were striking, despite the fact that, in her view, he has a history of not being very tough when he’s sick.

Studies show about a half to two-thirds of patients have symptoms like aches, chills and headaches after the second COVID-19 vaccine but those symptoms are mild to moderate.

“There were no hospitalizations related to these events and people recover in one to two days,” Holguin said.

He said the symptoms pale in comparison to those who get hit hard with COVID-19.

Holguin said a very small percentage of people allergic to one of the compounds in the vaccine will have more severe side-effects but anyone who gets vaccinated is required to wait for 15 minutes after the shot to ensure they receive medical treatment if needed.

For those who do experience aches and pains, Dr. Holguin recommends over-the-counter medication like Tylenol or Advil, but not before the shots. Some researchers have questioned over the years whether pain relievers taken in advance might reduce the effectiveness of vaccines, but research has found no correlation. Still, just to be safe, doctors suggest waiting to see if you have side effects before treating them.

The post-vaccine side-effects may be a sign that the body’s immune system is kicking in, but Dr. Holguin said people should simply consider themselves lucky if they don’t have side-effects.

“There's absolutely no correlation between how severe your symptoms are from the vaccine and how effective it is,” he said.

“The brain is incredibly powerful but that doesn’t mean you’re crazy,” Dr. Holguin said. “It means for people already worried about what they're going to experience, it may influence how they feel.”