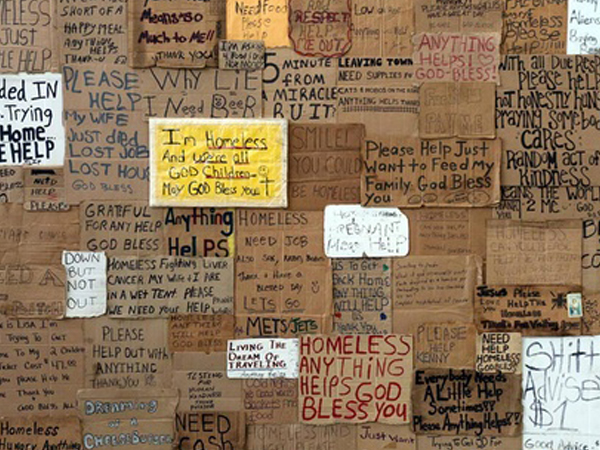 Willie Baronet uses signs he purchases from the homeless as art. Each exhibit is unique because he creates the piece onsite. He'll be bringing his work to Durango on Aug. 8, where it will hang in the downtown Transit Center until Sept. 4./ Courtesy photo

Nationally recognized Filmmaker/artist Willie Baronet is not coming to Durango to solve the city’s problems. What he’s doing is bringing the kind of art and images that can ignite a community-wide conversation.

“It changes how you think of the issue,” Durango City Councilor Melissa Youssef said of “Signs of Humanity,” Baronet’s award-winning documentary, which will be shown next month in Durango. “I was really impressed with his unique approach ... raising awareness and educating people on what it means to be homeless.”

Like many people, Baronet used to feel uncomfortable every time he passed someone living on the street.

He knew he wanted to change that dynamic. He knew he wanted to find a way to talk to people who were homeless, not just look the other way or ignore them. But, he wasn’t sure how. Then one day, he found a way. He offered to buy their cardboard signs.

“I quickly realized it led to these interesting conversations that I would never have had otherwise,” Baronet said.

He discovered the homeless people he met were just like everyone else he knew, unique human beings with their own stories to tell. Not only was he seeing them, they were seeing him.

“The most profound thing I’ve learned is that I used to think that it was us and them,” Baronet said. “I realized that it’s just us.”

He bought his first sign in 1993, and over the years he kept on buying them, eventually using the signs to create an art piece while earning his Master in Fine Arts from the University of Texas in Dallas.

Using the footage he shot on that journey, he created his documentary “Signs of Humanity,” which, most recently, won the Audience Choice award for feature length films at the Fort Worth Indie Film Showcase.

Baronet’s work is certainly about the conversations he had on his journey, showing the people behind the poverty. But, it’s also about something else – what it means to be “home.”

In the artwork he displays, he often includes a handful of Sharpies and a blank sign with just one question: “What does home mean to you?”

Understanding what homelessness means to a person can be key to understanding how to help.

Youssef said as a community talking about homelessness, Durango needs to understand where the homeless are coming from. If people don’t understand, any solutions

– whether it’s a homeless camp or health care program – the city comes up with won’t be successful.

It’s one of the reasons she’s excited about bringing Baronet to Durango for a screening and art installation starting Aug. 9. “What a great opportunity it is to understand what we’re trying to address,” she said.

Youssef first learned about Baronet’s “We Are All Homeless” campaign and “Signs of Humanity” documentary through a mutual friend, Jill Agnew.

Agnew’s husband grew up in Durango and although they now live in Dallas, their family is still in this area, and they visit often.

The last time Agnew came to visit, it seemed one subject was on everyone’s mind – the homeless. Her friends and neighbors knew she’d been working with Baronet and the homeless community in Dallas for years, so it was all they wanted to talk about.

One story she heard was about a young man, who appeared to be in good health, holding a sign on the streets of Durango asking for marijuana. She said people struggled to feel compassion for that.

But, even that person has a story, she added, and something brought him to that place. “No one aspires to that kind of life,” she said.

Agnew also explained how it takes attention away from the other face of homelessness. “All those people who are living in poverty, those are the people we want  to bring attention to,” she said.

Durango is not unique, Baronet said. Other cities and towns across the country grapple with the same issues. And, there is no silver bullet.

“I don’t think there’s one right answer,” he added. “Whatever you’re compelled to do – do it.”

For him, he was compelled to buy the signs.

His artwork has been displayed in communities across the country. He’s also spoken at leadership conferences and “Signs of Humanity” has been screened at film festivals from Sydney to California. What hasn’t happened, however, is the type of organized, communitywide event he’s coming to Durango for.

It all begins Wed., Aug. 9, with the installation of his art-work at the city’s Transit Center, followed the next day by two evening showings of his documentary film and a Q&A session with Baronet.

Youssef plans to follow-up his visit with a community panel on homelessness, giving residents the opportunity to talk about the solutions that will fit their city.

Baronet admits it’s not easy to start the conversation and said people should go easy on themselves. But, feeling guilty or shameful about ignoring the homeless is not going to help anyone, least of all people living on the street.

Sometimes a smile and wave makes a difference, he added. It’s about acknowledging the homeless, slowing down for a moment and seeing the person.

“It’s uncomfortable to have conversations, but that’s really what I hope people will do,” he said.

"We Are All Homeless"

Willie Baronet’s campaign, We Are All Homeless is coming to Durango.

To find out more about the campaign, visit Weareallhomeless.org

Or, check out the documentary and view clips at Signsofhumanity.org