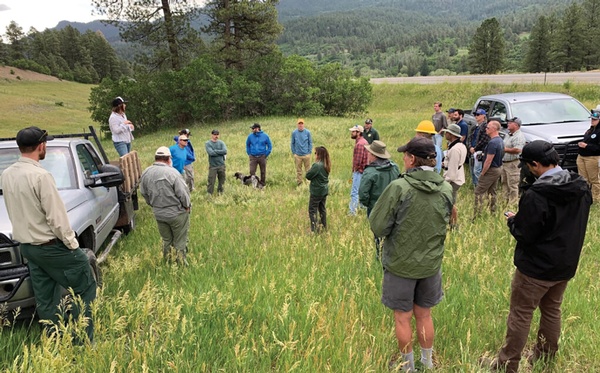 A?group of interested parties take a tour of the Jackson Mountain area near Pagosa Springs as plans start to take shape for a new mountain bike park on Forest Service land./ Courtesy of U.S. Forest Service

Can you just start a mountain bike park on public lands in Colorado? Well, a trails advocacy group in Pagosa Springs is about to find out after proposing a 4,500-acre park with miles of new trails that is expected to have a major impact on the landscape.

The project, it goes without saying, has its fans and… people who don’t exactly love the idea.

Supporting the project, of course, are mountain bikers, mostly organized with the nonprofit mountain bike advocacy group DUST2, who say the public lands surrounding Pagosa Springs lack exciting mountain bike terrain. This park, however, would change all that.

On the other side of the issue are some recreational users and members of the public who say building a huge new mountain bike park would irrevocably – and negatively – impact the land. What’s more, these critics point out that the area in question is already home to an illegal trails network.

Amid it all, wildlife experts have expressed concerns about adding hundreds of new users into an area that is home to big game, namely deer and elk, which are already seeing declining numbers across the region.

The battle zone for the debate is just north of Pagosa Springs, in a relatively remote and undeveloped 11,000-acre area known as Jackson Mountain, located in the San Juan National Forest. Since the early 2000s, mountain bikers have built and used illegal trails on Jackson Mountain, federal records show. In the past few years, amid increasing use, there has been a concerted effort led by DUST2 to push the Forest Service into establishing a mountain bike park.

Now, the Forest Service is set to begin a yearlong process to evaluate the proposed project.

“In Pagosa, this is a really, really, really big deal for a lot of people,” Annie Sewell, president of DUST2, said. “We’ve proposed a real change to the landscape, and now the process will work itself out.”

According to federal records, illegal trails were first discovered around Jackson Mountain in the 2000s. In 2007, Colorado Parks and Wildlife started voicing concerns about the impacts to wildlife, because Jackson Mountain serves as a critical habitat and migration corridor for elk and deer. And with so much development and pressure on the landscape already, Jackson Mountain has remained one of the last refuges.

“It’s frustrating,” Doug Purcell, CPW’s District Wildlife Manager serving Pagosa Springs, said. “The trails on Jackson Mountain are illegal trails, and we’re not asking people to not be allowed to use the forest, but we are trying to preserve the most important areas.”

“Jackson Mountain has always been this big goal,” Sewell said. “And that was really the turning point for us and the Forest Service."

Although Pagosa Springs is flush with public lands, mountain bikers there say there aren’t many great riding options. There’s Turkey Springs trail network, which features miles of trails but is relatively flat, and Treasure Mountain, which requires a long car shuttle.

Sewell, who said she has ridden the rogue Jackson Mountain trails, said it checks all the boxes.

“It’s really fun – it’s close to town and has huge rides with technical terrain,” she said. “The No. 1 request we get is, ‘Can you do something about Jackson Mountain?’ We’ve heard that for two to three years.”

In 2020, DUST2 received additional funding from the City of Pagosa Springs and Archuleta County to devise a trails plan. The trails group then hired the International Mountain Bicycling Association for about $80,000 to write up a conceptual plan.

Shane Wilson, IMBA’s project manager for Jackson Mountain, said the group met with various stakeholders and conducted site visits to understand the landscape. What began as a potential 8,000-acre park with 60 miles of trails was whittled down to 4,500 acres with about 45 miles of trails after wildlife, grazing and other concerns were taken into account. (For reference, Durango’s Horse Gulch trail system has just over 5,000 acres and 60 miles of trails, according to the city’s website.)

“We’re not saying that’s everything that has to be built,” Wilson said. “It’s a conversation at this point, a vision for everything that could be there. And sometimes that vision can be scary for folks.”

So, can just anyone propose a mountain bike park on public lands? It turns out, yeah, kind of. Josh Peck, the Forest Service Ranger overseeing the Pagosa District, said any member of the public is allowed to propose projects on federal lands. But Jackson Mountain is unique.

Mountain bikers have already been using illegal trails on Jackson Mountain for years, causing a host of issues, Peck said. So when DUST2 approached about establishing a safer, established network – along with the fact that the Pagosa area lacks technical mountain bike terrain – it seemed like a good solution.

“With this one, we saw an increase in use in the past five to 10 years, and it was something we needed to address,” Peck said. “And once it ends up on those user trail apps (which it did), it’s hard to pull back.”

Peck said the Forest Service will by no means rubber stamp IMBA’s trail plan. Instead, he said the conceptual plan helps serve as a guide in the scoping and analyzing process. “It’s all about thinking about the appropriate opportunity on the landscape,” Peck said. “There is a desire from the community for more mountain bike trails with difficult terrain. And Jackson Mountain is one place we can provide that.”

Sewell, too, believes a designated park would actually cut down on the construction of illegal trails.

“Clearly there’s been a rift with the problem of illegal trails, and we wanted to provide an organized group that can work within the proper challenges to deliver a singletrack system, so no one feels the need to go rogue,” Sewell said.

Indeed, one of the core criticisms of the project is that mountain bikers are being “rewarded” for creating illegal trails that grew in popularity, thereby forcing the Forest Service’s hand.

One group that has been critical of the plan is the San Juan Back Country Horsemen, several of whom did not agree to an interview for this story. They did, however, provide a document that raised concerns with the proposed change in the landscape. “It seems the Forest Service is rewarding illegal trail-building in the Jackson Mountain area with an area trails plan for mountain bikers,” SJBCH wrote.

Brien Webster, Southwest program manager for Backcountry Hunters & Anglers, shared a similar sentiment. “We don’t stand for this with other activities on public lands like mining or logging,” he said. “And it’s important the outdoor recreation community be held to the same standard as all other activities on public lands, because there is an associated impact with new trails.”

Sewell said DUST2 has asked the mountain bike community not to build illegal trails, which cause a headache for public land agencies and advocacy groups alike. It’s costly to shut them down, takes time to repair damage and cultivates a negative image of the user group.

“But no one can stop it 100%,” Sewell said. “It’s just like the Bible says, ‘The poor you will always have with you.’ Well, illegal trail-building will always be with us.”

For IMBA’s part, Wilson said he has seen no evidence of illegal trail-building (though, it should be noted, people use different terms – user-created trails, rogue trails, non-system trails – based on different factors). Instead, Wilson said the trails in question were actually formed by livestock that are “sometimes exploited by humans.”

And perhaps the biggest issue is what a new mountain bike park would do to already-struggling elk and deer populations. To understand the potential impacts, one need look no farther than nearby Turkey Springs, CPW’s Purcell said.

There, about 15-20 years ago, the Forest Service grappled with a nearly identical problem to Jackson Mountain when user-created trails started popping up. “It was a massive free-for-all,” Sewell said. “And it was a huge headache for the Forest Service. They (ended up formalizing those) trails, but it created a lot of hard feelings.”

Purcell, who has lived in Pagosa for 20 years (and, for what it’s worth, is a mountain biker), said the Turkey Springs trail system “pretty much eliminated the use of that area” by wildlife. And, in all fairness, it’s not just mountain bikers – use by hikers, hunters and horseback riders have all “dramatically increased.”

“The wildlife is gone,” Purcell said. “They just go around it.”

The problem is, with all the development in Colorado, there are fewer and fewer places for wildlife to go, especially when it comes to migration routes and breeding grounds.

On a positive note, however, Purcell believes a balance can be struck by keeping new trails to the east and leaving the western side of Jackson Mountain alone. He fears, however, that once new trails are built, it will spur more illegal trails in protected areas. And, just as frustrating, Purcell said there are more suitable locations for a mountain bike park in Pagosa that don’t conflict with wildlife. But, because of the illegal trail-building, it’s too late for that.

“We could have picked better places around Pagosa that wouldn’t have given CPW as much anxiety about impacts to important habitats,” he said. “The Forest Service has acknowledged that, but we’re too far down the road on this.”

A microcosm of the West

The Forest Service is expected to launch its National Environmental Policy Act (NEPA) process on Jackson Mountain this fall, which requires agencies to analyze if proposed actions have significant environmental, social and economic impacts. This process includes public comment ns meetings to allow the public to weigh in.

The Forest Service’s Peck said the agency hopes to come to a final decision by spring 2023. While some interviewed for this story see this timeline as rushed, Peck maintained the agency has already spent six months preparing for the NEPA process. As for the wildlife issue, Peck said the western side of Jackson Mountain, the most critical to wildlife, “won’t see a lot of development.”

And, as CPW’s Purcell noted, this issue is not unique to Jackson Mountain but rather is a microcosm of the intense pressure on public lands across Colorado and the West. “Everyone wants a piece of public lands; everyone wants their activity to be supported,” he said. “But we need to slow down and look at the total landscape. We’re going through some real growing pains.”

At Jackson Mountain, though, with trails already built and growing in popularity, there’s no backtracking. Now, it’ll be up to public land managers to find a balance between recreation and protection of wildlife.

“This is urgent,” BHA’s Webster said. “We are a fast-growing state with more and more recreation, and we are pushing wildlife out of the habitat they depend on. Wildlife is increasingly existing within the margins.”

This story has been updated to reflect the Jackson Mountain project is not on the Collaborative Forest Landscape Restoration Program list. Incorrect information was given to The Durango Telegraph.