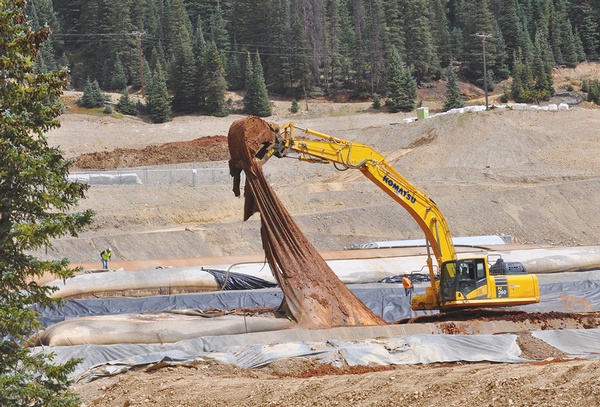 At the Gladstone IWTP, an excavator rips open a massive bag of sludge that remains from wastewater from the Gold King Mine. The Gladstone plant is expected to run out of room to store the sludge by the end of 2021. The EPA recently released a proposal that would move the sludge to the Mayflower Mill site, about a mile northeast of Silverton along the Animas River, for longterm disposal./File photo

The plan for the Mayflower has landed. Nearly five years after the Gold King Mine spill unleashed an orange torrent of mine waste down the Animas River and across screens around the world, the Environmental Protection Agency has announced its latest plan for dealing with waste from the Bonita Peak Superfund site. The proposal calls for storing sludge from the Gladstone Interim Water Treatment Plant, which is expected to reach capacity by the end of next year, at the Mayflower Mill, about a mile northeast of Silverton along the banks of the Upper Animas River.

The proposed site is on land primarily owned by the Sunnyside Gold Corp.

EPA will host a virtual meeting on the proposed plan Tues., Aug. 11, with a presentation on the plan from 6-7 p.m. followed by a public comment period from 7-8 p.m. The meeting can be streamed at https://epawebconferencing.acms.com/bpmdproposedplan.

Built as a temporary fix in 2015, the Gladstone plant, about 6 miles north of Silverton, intercepts and treats contaminated water from the Gold King Mine adit. It prevents the discharge of roughly 992 pounds per day of contaminants into Cement Creek. However, the treatment process creates 4,600-6,000 cubic yards of heavy-metal laden sludge a year, and capacity for sludge storage at Gladstone is expected to run out by late 2021 or early 2022. As a result, EPA was tasked with finding a long-term sludge solution.

According to the EPA, the Mayflower site was chosen because of it is close to Gladstone, is in a high and dry location, and the area is already disturbed, having been used for mining waste from the Mayflower Mill. It also has the capacity to store many years’ worth of sludge.

“It came down to the Mayflower tailings area because it has a large enough capacity that it would make sense, so that’s our preferred alternative,” EPA spokeswoman Katherine Jenkins said. “The point of this process now is to get public input and feedback.”

The nearly $25 million proposal calls for placing the sludge in lined cells on top of three existing tailings impoundments. Once a cell is full, it will be capped and reclaimed with soil and vegetation. Leachate ponds, and drying and stockpile cells will also be located on the site.

The Mayflower Mill was built in 1929-30 and operated until 1991. Operations included crushing (milling) and mineral extraction for export to the Durango Smelter. During its heyday, the mill produced several hundred tons of tailings per day and the tailings impoundments were used into the early 2000s.

On. Aug. 5, 2015, an EPA-contracted crew triggered a blowout at the Gold King Mine, near Gladstone, that sent an orange torrent of mine waste down Cement Creek and the Animas River, and, eventually, into Lake Powell. Despite years of objections that Superfund status would tarnish the area’s reputation, the Bonita Peak Mining District Superfund Site was ultimately declared in 2016 to deal with the massive mine runoff problem. The Superfund site consists of an interconnected patchwork of 48 mines considered to be the top polluters in degrading the Animas watershed, stretches of which have not supported aquatic life for decades.

“This repository is desperately needed,” Peter Butler, chair of the BPMD Community Advisory Group told the Silverton Standard. “We need to find some place to put the sludge and mine waste, and a lot of people feel that (Mayflower) might be the best place for it.”

A sitewide study by the EPA found elevated concentrations of mining-related contaminants such as aluminucadmium, copper, lead, iron and zinc, in surface water, sediment, soil and waste rock. Water-quality standards are exceeded in many places, particularly in discharge from adits.

The Mayflower plan is just the latest step in cleaning up the acidic mine runoff. So far, the EPA has poured an estimated $75 million into researching and addressing the myriad problems in the area. There is no time frame for when the agency will present its final plan.

At the time of the Gold King Mine spill, Sunnyside Gold Corp., which owns the Sunnyside Mine, was considered a “potentially responsible party” due to its ownership and past mining activity in the area, then-EPA spokeswoman Cynthia Peterson said.

Although the Sunnyside Mine closed in 1991, it continued to leak acidic wastewater for years after. Steps were taken to address it, and the area’s numerous other leaking mines, by the Animas River Stakeholders Group, which formed in 1994. The coalition of local, state and federal agencies, mining companies and residents had some measurable success in addressing water quality in the drainage. In addition, in 1996, in an agreement with the State of Colorado, Sunnyside Gold installed three plugs to stem the flow of acid drainage in the American Tunnel, which transported materials and runoff from Sunnyside to Gladstone. However, researchers and experts believe that water from the Sunnyside Mine pool began backing up around 2001 and spilling into adjacent mines, like the Gold King. Sunnyside Gold, which was bought by the multinational Kinross Gold Corp. in 2003, denies the claim.

In 2015, pollution had gotten so bad that the EPA stepped in to install a bulkhead in the nearby Red & Bonita Mine, which was spewing 500 gallons of acidic wastewater a minute. It was during this project, when crews were exploring the entrance to the adjacent Gold King Mine, that the blowout occurred.

The Mayflower plan can be viewed in depth at: https://tinyurl.com/y4rwqkap. In addition to the public meeting Aug. 11, comments can be submitted via email or writing through Aug. 27. Send comments to: Katherine Jenkins, U.S. EPA Region 8, 1595 Wynkoop St. (8OC-PAI), Denver, CO, 80202 or email: jenkins.katherine@epa.gov.