Something's got to give
After 45 years, Durango Natural Foods Coop's future uncertain 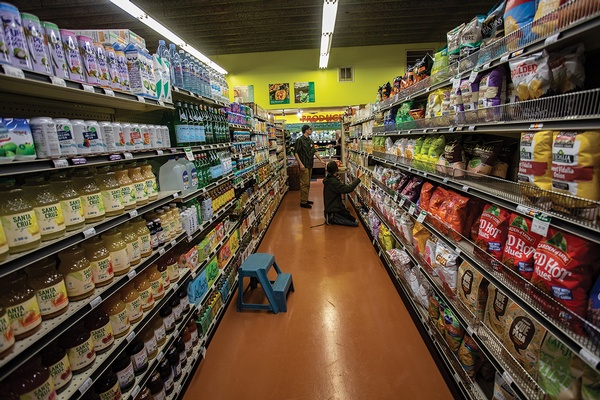 Bryan Gaddy, left, and another employee at Durango Natural Foods stock the shelves recently. The local cooperative is hosting a meeting for member-owners on Thursday when they'll be asked to give a vote of confidence – or no confidence – for the Board of Directors./Photo by Stephen Eginoire

Change is coming. It’s the only sure thing about the future of Durango Natural Foods, a local food cooperative off College Drive.

For the past decade, the coop has struggled to keep its fiscal head above water. Today, the bills have piled up to the point that another rally or belt-tightening campaign just won’t be enough to make ends meet.

With mountains of debt – much of it owed to local vendors – and uncertainty about its governing board, the coop’s member-owners are faced with several challenging decisions in the weeks ahead.

Decisions about whether or not the coop will see another 45 years. And, if it does, how those years will play out.

“The only reason a coop of any kind exists is to serve the needs of its member-owners,” Jules Masterjohn, a 19-year coop member who’s currently serving as the interim general manager, said. “We want to know ... how do we become something our member-owners want and need?”

It’s not debt the coop amassed overnight, and there are many reasons for the overwhelming invoices. But in the first part of 2018, it seemed the coop was starting to see light at the end of the tunnel with a slight uptick in sales. Then, the 416 Fire started.

“That really did knock our knees out from under us,” Masterjohn said.

Since then, Durango Natural Foods has been unable to recover. It wasn’t until recently – after making significant cuts to payroll, inventory and discount programs – that the coop was able to stop accruing debt.

Payroll is by far the biggest expense, so one staff position was cut and several shifts were eliminated. They’ve also reduced the hours of operation, opening later and closing earlier.

Masterjohn, who left the Board of Directors to take on the role of interim general manager after the previous general manager, Tsewang “Sherpa” Sherpalama, resigned at the end of last year, is also helping to reduce payroll costs by taking much less than the job typically paid. But, she can only fill the position until April, when a new general manager will need to be hired and paid accordingly.

In addition, they’ve reduced the amount of inventory available and all but one of the discount programs have been cancelled. Those programs cost the coop $60,000 last year alone.

Together, all these changes have helped to stem the tide, but these fixes are not long-term solutions. Nor do they address the outstanding debt.

In the past few months, the coop received two summons from local farmers. Fortunately, both bills were paid before the court dates but, Masterjohn said, it might not be the last legal action to come its way.

“All of the business people are in a difficult position,” she explained. “Some are more able to sit tight and weather this, others are not. We understand that reality.”

Masterjohn said the two local farmers who did have to take legal action also said they’d like to work with Durango Natural Foods in the future.

“If they’re willing to work with us, that’s a pretty good sign,” she added.

It’s not all debt and destruction at Durango Natural Foods. Since word came out about the coop’s mounting debt and struggle to stay afloat, member-owners and others in the community have been stepping up and looking for ways to help.

“There’s this really beautiful side to this,” Masterjohn said. “It’s the amount of support we’ve been getting.”

On another occasion, the coop paid its debt to a local farmer who handed the check right back to help the coop stay in business, Masterjohn said. Another vendor offered to take a gift card as payment.

In addition, member-owners have been volunteering, working shifts or helping with projects. Some have made personal donations, and others started a GoFundMe page.

One member-owner is currently researching the possibility of applying for a $250,000 grant. The coop is eligible, but it’s uncertain if they’ll receive the grant. It is, however another example of how member-owners don’t hesitate to help out in times of need. It’s something they’ve done before.

Stuck in the cycle

Durango Natural Foods used to be the only place in town to find organic and natural food. Then, about 10 years ago, stores began popping up all over the country looking to profit from the growing trend. Major supermarket chains even got in the game. Soon, those products could be found everywhere.

Adding to the challenge, the bigger chains were able to buy products in bulk, making them cheaper than Durango Natural Foods. It became a competitive marketplace that the coop still struggles to keep up with. The result has been a cycle of hard times followed by an out-pouring of support, then repeat.

What really needs to change, according to the coop’s treasurer Jamie Matthews, is member-owners can’t just come out in times of need. They need to keep coming and keep shopping, both in good times and bad.

Matthews said the coop has been sagging when it comes to member-owners shopping regularly. Today, the coop actually has 700 fewer customers than it did at this time last year.

“The coop exists to serve its member-owners,” Matthews said. “If the member-owners don’t shop at the coop, it won’t exist.”

It’s up to the member-owners to break the cycle, she added. And, it all starts this Thursday.

As the coop is about to celebrate its 45th anniversary, its board of directors and members are having to make dramatic decisions about its future.

First up is a meeting Thurs., Jan. 24, for member-owners of the coop. At this meeting there will be an unofficial vote of confidence in the Durango Natural Foods Board of Directors. It’s an opportunity for the board to find out exactly where they stand.

If the coop’s member-owners show confidence in the current board, they will continue to focus on fundraising efforts and taking care of the vendor debt.

If there is a vote of no confidence, Kate Husted, the coop’s board president, said that issue will be addressed as well. However, no matter how things turn out at Thursday’s meeting, no official votes are scheduled to follow.

“We need to regroup before we have an official vote on anything,” she added.

Anything and everything is still possible for the coop’s future. Some of the options that have been floated include dissolving the coop altogether or selling its current assets, including the building and property where it now stands. With the cash in hand, the coop could pay off debts and even start over with a clean slate in a new home.

Other alternatives could be to seek out personal loans from members, look for additional grant funding, increase member fees and more. At this point, nothing is off the table, and nothing is for certain, either.

Whether the member-owners decide they have confidence in the current board or not, and no matter what the members decide moving forward, things are going to change at the coop. It’s the one thing for certain.

Natalie New shops at Durango Natural Foods recently. One way member-owners have been able to support the coop is by shopping there regularly./Photo by Stephen Eginoire

More on the store

To see the latest news from Durango Natural Foods Coop or find out more about its history, visit the coop’s website at www.durangonaturalfoods.coop. If you’d like to shop the coop, 575 E. 8th Ave.