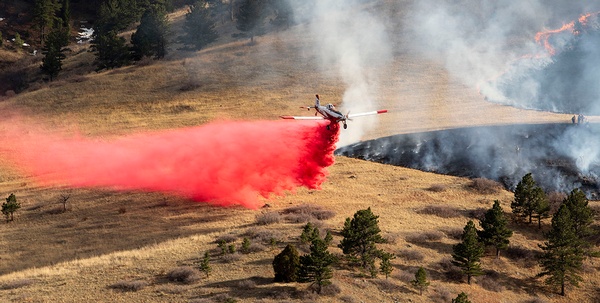 A plane drops slurry on the NCAR fire near Boulder last March. A damning report by an independent consultant found that employees in the state's Dept. of Emergency Management have little faith in the agency's top brass to address issues./ Kevin Beaty, Denverite

The leadership team at Colorado’s state agency in charge of natural and public health disaster response is “dysfunctional” and in need of restructuring. That’s according to a new report released by a third-party contractor this week.

The report revealed concerns from employees about “a lack of understanding of roles and responsibilities” within the sprawling Division of Homeland Security and Emergency Management. Employees said dysfunction at the highest levels had created distrust and eroded communication among rank-and-file staff.

Investigators with the workplace consulting agency Investigations Law Group made recommendations about ways to improve culture and working conditions within the division. Key suggestions included removing an ineffective Chief of Staff position and replacing it with a new Deputy Director to help manage administrative functions.

The report also recommended “senior leadership intervention” for three top directors, who were not named. The intervention should involve hiring an independent party to work with leaders over the course of six to 12 months to “develop shared values.”

The state commissioned the review last August after allegations of verbal abuse and misconduct from one of its top directors, Mike Willis, who oversees the division’s Office of Emergency Management.

Willis has been suspended at least twice during his tenure for “behavior that included berating female staffers, throwing objects in rage and intimidating workers to the point they thought it was close to getting physical,” according to a report in The Denver Post.

A majority of employees interviewed for the report said they were overall satisfied with their job, feel respected by managers and peers and “proud to tell others that they work at DHSEM.”

Yet the division as a whole was consistently described as “siloed,” according to the report. Poor career planning, confusion around work-from-home policies and excessive scrutiny of employee timesheets contributed to a deterioration of culture.

Employees interviewed in the report expressed “little faith” in the director’s ability to address issues.

Stan Hilkey, the executive director of the state’s Department of Public Safety, which oversees the division, said in a statement he would implement the report’s recommendations.

“This process has provided some clarity on how and where we can improve,” Hilkey said. “Strengthening workplace culture, harmony and satisfaction depends on unity of effort from all of us, and I’m confident that together we can further align these values.”

At least 83% of the department’s employees were interviewed or surveyed for the report. Many expressed a sense of accomplishment in their day-to-day work, as well as a desire for a stronger commitment to diversity efforts.