State to require biggest polluters to report emissions, but does it go far enough? 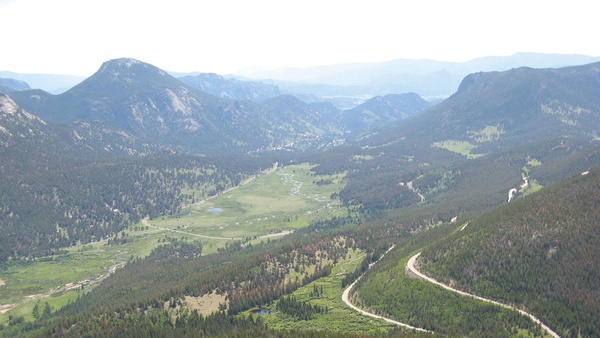 A haze of pollution obscures the view at Rocky Mountain National Park. In an effort to reduce carbon emissions, the state passed legislation with new carbon reduction goals. To help reach those goals, the state will start requiring producers of greenhouse gases, such as oil and gas operators, to report their emissions to the state./Courtesy photo

Colorado will now require some operations to report their greenhouse gas emissions to the state. Regulation 22 will help identify where and how much pollution is occurring to better track progress on the state’s climate goals.

That timeline has been set back by litigation after a federal court ruled that the EPA can’t ban HFCs under a provision of the Clean Air Act, since the concern is climate and not ozone. But states that are part of the U.S. Climate Alliance – including Colorado, California, Washington and Virginia – have decided to move forward with the phase-out.

The state’s Air Quality Control Commission unanimously adopted Regulation 22, which is a result of climate legislation passed last year that established statewide greenhouse gas emission goals. The legislation directed the commission to update how the state takes inventory of these emissions.

That will be done by implementing reporting requirements for certain emitters. The new regulation builds on what’s already reported to the EPA under federal requirements. Oil and gas operators, cement plants, steel producers, electronics manufacturers and some municipal solid waste landfills will now report their data to Colorado in addition to the federal agency.

The state will also require additional sources, such as utilities providers, natural gas distribution companies, industrial waste landfills, industrial wastewater treatment plants and active underground coal mines to report. This information will not be shared with the EPA.

Companies will piggyback off the EPA’s existing electronic greenhouse gas reporting tool to help the state from using resources to develop its own reporting system.

To fill gaps in information, particularly for fuel imported into Colorado, the state will use the U.S. Energy Information Administration’s reports on petroleum products shipped into the state. The state will also use local fuel tax data to identify fuel volume usage, which will include sources like biodiesel, and compressed or liquefied natural gas.

Oil and gas that’s exported out of Colorado will be excluded from the state’s emission’s inventory, but both imported and exported electricity will be included.

Emitters that already report to the EPA will need to start submitting data to Colorado by March 2021. New and additional reporters will start March 2022. This more robust inventory will help inform the state’s greenhouse gas reduction strategies and track progress toward Colorado’s goal to reduce carbon emissions 26 percent by 2025; 50 percent by 2030; and 90 percent by 2050, based on 2005 emissions.

Environmental groups see the regulation as a move in the right direction but feel more needs to be done for the state to have a clear understanding of its pollution sources.

Pam Kiely, senior director of regulatory strategy with the Environmental Defense Fund, pushed for businesses supplying fuel to Colorado to be required to directly report emissions to the state, instead of the state seeking out that information through existing reports.

“There will be questions as to whether that data is in fact comprehensive, and whether there are any gaps,” Kiely said. She believes it could also lead to transparency issues, since the information might be collected without details such as entities of emitters and the makeup of the emissions.

“And that’s really important when it comes to having a full picture of what is happening in Colorado with respect to greenhouse gas pollution,” Kiely said. “And it’s certainly the way that other states who have other comprehensive greenhouse gas reporting requirements have chosen to ensure the data that they’re collecting is accurate and actionable from a regulation perspective.”

Jeremy Nichols is the climate and energy program director for WildEarth Guardians. He felt the adoption of the regulation was the right step, but not big enough to “reign in the state’s greenhouse gas emissions.”

“We’ve got to do way, way more than just go after HFCs, and way more than just this basic reporting rule,” Nichols said. He had issues with various parts of the regulation, including its exclusion of emissions from the state’s exported oil and gas.

“How can we claim that we’re meeting any climate objectives, or that we’re making climate progress, when all we’re doing is producing oil and gas and coal to be consumed or combusted somewhere else?” Nichols questioned.

A statement from the Colorado Oil and Gas Association said 70 percent of the state’s natural gas liquid sales are not combusted in Colorado or in the year they were produced.

“So production inventories can be significantly different than emissions inventories ... We urge (the state) to use the existing data to fill in any gaps,” Dan Haley, president and CEO of COGA, wrote. “There is not currently a one-size-fits-all approach to emissions monitoring, and more research and development is needed before rules can be effectively imposed and implemented.”

CPR News reached out to Trane, a company with a production facility in Pueblo that produces HVAC, chillers and other equipment that utilizes HFCs in their products. We did not receive a response at the time of publication.