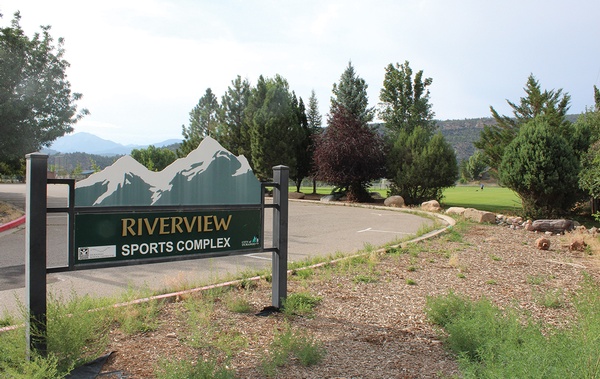 The 11.22-acre Riverview Sports Complex, seen here Tuesday, is being eyed by 9-R as the potenetial new home for Miller Middle School. The current middle school is slated for the wrecking ball. Other ideas include housing students in modulars on the current middle school site or building a new school at Three Springs or the fairgrounds./Photo by Jonathan Romeo

Blindsided by a recent proposal to relocate Miller Middle School to the Riverview Sports Complex, some Durango residents are up in arms in an attempt to save the popular park and open space.

“Since we’ve caught wind of it, we’ve been trying to spread the news to neighbors,” Ericka Curlee, who lives in the Riverview area, said. “It’s a heavily used park, and we’re just trying to save a little piece of open space.”

In the November 2020 election, nearly 72% of voters approved a $90 million bond for Durango School District 9-R for aging schools and other infrastructure needs, and atop the list was the timeworn Miller Middle School.

However, 9-R, at the time, said the improvements would happen on the current Miller Middle grounds, at 2608 Junction St. “This bond will … rebuild and renovate the existing Miller Middle School campus,” the ballot language read.

So residents were a little taken aback when 9-R released a new study this summer that looked at five different options for the future of Miller, three of which would move the school to a completely different location.

Especially concerning, several residents told The Durango Telegraph, was the move to the Riverview Sports Complex ranked as the most preferred option, notwithstanding it would completely eliminate the open space and sports fields there.

“The fact that it would be bulldozed is just unacceptable,” Mary Prouty, who has lived in the Riverview area since 1985, said. “I can’t tell you how important (the park) is for so many people who use it.”

In 2019, the school district released a “master plan” that looked at the long-term future needs of its buildings. The nearly 60-year-old Miller Middle, ripe with asbestos and failing infrastructure, was pegged as a top priority.

The proposal sold to voters during the 2020 election, however, said 9-R would demolish and rebuild the school on its current site at an estimated $45 million, by far the most expensive project.

Samantha Gallagher, chief financial officer for 9-R, said at a public meeting Tuesday that since planning began in March 2021, significant challenges with rebuilding at the current location emerged. Namely, concerns over 450 students having to attend class in modular buildings for two to three years, and the impact that would have on learning.

So, 9-R went back to the drawing board and evaluated five possible routes: two for building at the current Miller site, as well as three off-site options at Three Springs, the La Plata County Fairgrounds and Riverview.

“As a district, we felt it was important to do our due diligence to provide the best building we can,” Gallagher said. “The last bond increase we had was 2002, so we really want to … make the most informed decision possible.”

The problem is, many resident reiterated, 9-R failed to communicate this shift to the public. The new study was presented to the school district’s board June 22, but many residents had to find out on social media or word of mouth.

“A lot of people are very emotional about this issue, and wondering why we’re even talking about it,” Riverview resident Jessica Corley said Tuesday. “It should not be something that happens during summer break with poor public awareness.”

Erin Glick, who said she works for the school district, said at Tuesday’s hearing she didn’t find out about the proposals until she started receiving emails from Riverview residents trying to spread the word to save the open space. “I’m a little sad that’s how I found out about it,” she said.

According to the study, each site is ranked based on a number of pros and cons. Riverview, which placed the highest, was seen as a spot with a good location, already owned by 9-R that required minimal off-site work.

Residents, however, were quick to lambaste the report, arguing not only would the community lose the popular park and fields, it would also create a traffic nightmare in the neighborhood, exacerbated by the adjacent Riverview Elementary School.

“I don’t think that’s a good idea,” Tiffany Mapel, who has taught at Miller Middle for nearly 20 years, said. “I am for keeping Miller on its current site. But the old building needs to come down and a new one needs to come up.”

If not there, where?

If rebuilding at the existing Miller Middle location is out of the question, it appeared the consensus Tuesday was to move the school to the current site of the La Plata County Fairgrounds, which is expected to relocate in coming years to Durango Mesa Park.

The fairgrounds property, however, is owned by La Plata County. 9-R spokeswoman Julie Popp said in an interview that relocating to the fairgrounds, however, would take much longer than the timeline anticipated with other options.

County spokesman Ted Holteen said 9-R has not approached county officials about using the fairgrounds. “There’s been absolutely no discussion between the two parties,” he said.

The other off-site location, Three Springs, was seen by many speakers Tuesday as too far a commute for parents and students who mostly live on the north end of Durango, some as far as Purgatory Resort an estimated 26 miles to the north.

And, though Riverview Sports Complex is in a centralized location, it still remains unclear how many sports teams would be displaced. City spokesman Tom Sluis did not return requests for comment on how many leagues use the grounds.

As it stands, the 9-R school board is expected to make a decision Aug. 31 so it can keep its timeline for construction to start in 2022, in the hopes of opening for the 2024/25 school year.

But newly arrived superintendent Karen Cheser said Tuesday if more time is needed, the deadline can be extended. While not in her position as superintendent until recently, Cheser said 9-R will make a better effort to be transparent.

“We will do better communicating,” she said. “We want to do what’s right for our community.”

Popp, 9-R’s spokeswoman, said modular buildings were always part of the original plan, but Cheser, upon her arrival, brought renewed concerns given past experience with modulars. Still, Popp emphasized the project remains in its evaluation phase, and no decisions have been made. More public hearings are scheduled for early August.

“It feels very quick, but this is just the start of it,” she said. “If we have to go back to the drawing board, we will.”

Popp said 9-R believes the ballot language does allow for the construction of a new Miller Middle off-site. Nearby residents, however, challenge this notion, and said Tuesday they have consulted attorneys should it come to that.

“There are a number of folks prepared to take legal action,” Corley said. “We need to think about these decisions before we waste valuable school dollars on legal ramifications.”