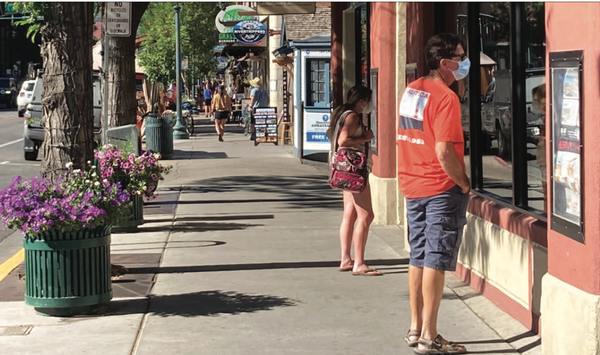 Masked Main Avenue shoppers take a gander at the local real estate offerings Tuesday. Since COVID restrictions were loosened, La Plata County has seen a marked rise in cases. As of Tuesday, there were 138 confirmed COVID cases, this after holding steady for much of June./Photo by Missy Votel

The mercury is not the only thing climbing right now. In recent weeks, La Plata County has seen an uptick in the COVID curve, according to San Juan Basin Health Department, which began tracking cases March 23. As of Tuesday, there were 138 reported cases on SJBH’s data dashboard, this after a relatively quiet May and June, when the curve appeared to be flattening.

The surge began the last week in June, when cases rose by 28, from 91 to 119. This is the biggest weekly rise in cases; the second biggest was the last week of March, which saw 24. The end of June also saw the highest number of cases in a day, with nine confirmed June 26. July 5 also saw a big day, with seven cases, the second-most in a day since March 28.

“It is alarming but not necessarily unexpected. We have actually been seeing the case count go up for a couple weeks now,” SJBH spokesperson Claire Ninde said Monday. “Generally, we believe the positive cases are because things are opening up, there is more interaction of people and summer activities taking place, and we are seeing an influx of visitors from other states that are experiencing surges.”

So far, July has not been faring much better. For the first week of July, there have been 19 reported cases. However, with up to a 14-day incubation period for the virus and the city packed for the 4th of July weekend, Ninde expects the numbers to flare again. “This definitely has us concerned about upcoming medical capacity but we have been working on surge plans with medical partners since the beginning of the pandemic,” she said.

On Wednesday, Mike Murphy, Interim CEO of Centura Health-Mercy Regional Medical Center confirmed that the hospital has seen a recent increase of COVID patients in the ER. “In particular, we are seeing many visitors to our area from other states that are experiencing high levels of COVID-19 spread,” he said. The hospital is continuing to practice prevention measures, including sterilizing surfaces, wearing personal protective equipment and social distancing, and he encouraged residents to remain vigilant as well. “These are the best practices we have to prevent the spread of COVID-19 in our community,” he said.

Mercy recently received five ventilators from the national stockpile, however Murphy said there is the ability to shift resources from other facilities in the Centura System. In addition, Centura received FDA clearance and worked with vendors to have the capability to convert anesthesia and Bi-Pap machines to ventilators if needed.

Since the pandemic began, there have been more than 5,500 diagnostic coronavirus tests and 3,100 antibody tests taken in La Plata and Archuleta counties. The majority of cases are in residents, with only four cases being confirmed in visitors to La Plata County. Slightly more women than men have been infected, and the biggest age group infected has been those in their twenties (30), followed by 50-59 (28) and 60-69 (24.)

Currently, the waiting period for results of diagnostic tests is about six days, although that could change as more tests are being conducted. With the significant increases in cases, SJBPH has also been busy with contact tracing, isolation and quarantine guidance and follow-up, and coordination with other health agencies on nonresidents who tested positive.

“This is why we continue to stress the precautions that we know work: social distancing, wearing face coverings, keeping gatherings to just those in your household, washing hands frequently, and staying home and getting tested if you are sick,” said Ninde.

The uptick in Durango seems to be mirroring a wider trend across the state. On June 30, Gov. Polis ordered bars closed again as Colorado saw a rise in infections in nine of the past 14 days. Other non-essential businesses are still allowed to be open, although SJBH extended its facemask order for workers in such establishments through July.

The state also released the framework for the next phase of re-opening, “Protect Our Neighbors,” which would allow communities that meet certain criteria – such as strong health-care systems and low virus levels – to ease restrictions.

Meanwhile, local businesses in need of PPE can order disposable facemasks and bulk hand sanitizer through the Southwest Colorado Disaster Assistance (SWCODA) and La Plata County Economic Recovery Task Force. Orders can be placed online, while supplies last, at SWCODA.org and picked up at the Durango Chamber of Commerce, Fridays from 9 a.m.-1 p.m.

SJBH updates its dashboard every day at 5 p.m. To check out the latest stats, go to: sjbpublichealth.org/sjbph-data-dashboard/.

To serve and protect: Balancing tourism with community health 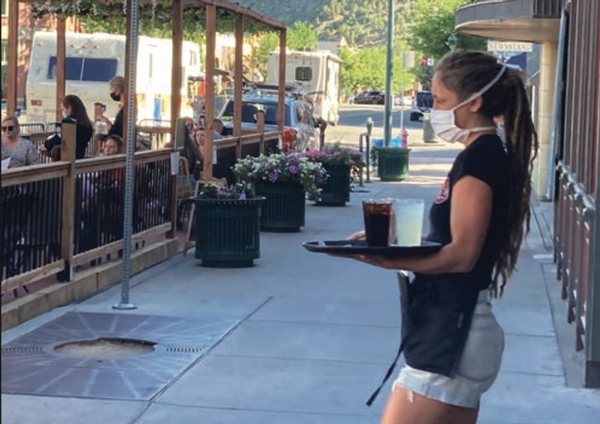 Just how – or if – to market Durango during difficult and awkward times? Visit Durango, the official marketing arm of the Durango Tourism Office, is asking locals what they think about marketing to tourists during COVID.

“Unmanaged tourism can diminish the quality of life for locals and create a negative experience for visitors,” Theresa Blake Graven, Tourism & Communications Director for Visit Durango, said. “Therefore Visit Durango is developing a responsible tourism strategy, including the ‘Care for Durango’ campaign, to encourage responsible travel in times of COVID.”

Through July 10, locals are invited to take a 10-minute online survey gauging their attitudes on tourism and how it affects the local economy. Results will be used to help inform marketing moving forward and to sweeten the pot, everyone who completes the survey will be entered to win a $150 VISA gift card.

According to Visit Durango, tourism is the largest industry in La Plata County, accounting for one-third of the local economy. However, as we all know, tourism can be a double-edged sword, bringing money and jobs but also the ills, quite literally, that go along with it.

“The data collected from this survey will enable Visit Durango to make more informed decisions about welcoming visitors back to La Plata County post-COVID-19 and promoting responsible tourism moving forward,” reads the survey. “The ultimate goal is to support long-term economic vitality, resiliency and quality-of-life for our residents.”

To take the survey, go to https://mysay.is/LPCResident.