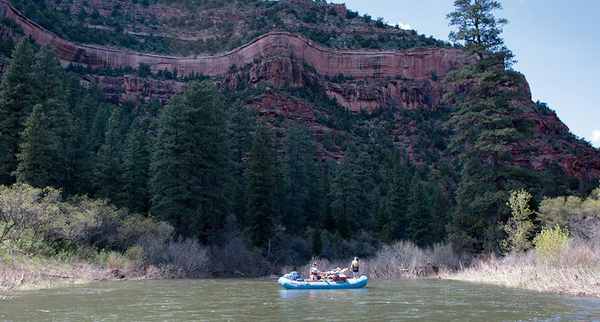 The state water board won the latest legal round in a battle over in-stream flows in the Dolores River – but it might not be the last round.

The case began in 2015 when the Colorado Water Conservation Board dedicated a 900 cfs minimum standard for in-stream water flows on the lower Dolores River. The actual amount of water that can be called for under this new water right varies depending on the time of year. During peak spring flows or low flows in the winter, it can be anywhere from 100 cfs to 900 cfs, according to those familiar with the case.

The flows will not affect releases from McPhee Reservoir. They apply to a section of river much farther downstream, running about 33 miles between the confluences of the San Miguel River, north of Uravan, to West Creek in Gateway, near the Utah border.

The idea was to keep a minimum standard in that section o friver in order to protect three native fish – flannelmouth sucker, bluehead sucker and roundtail chub – and keep them off the endangered species list.

Although the in-stream flow is a junior right to all other existing water rights, it would be senior to future claims.
The Southwestern Water Conservation District, which covers the southwest corner of the state, argued the standard was too high. In times of drought, for example, those minimums couldn’t be met.

“This claim was one of the largest in-stream flow appropriations in the State of Colorado,” Bruce Whitehead, executive director for the Southwestern Water Conservation Board, said. The SWCD also expressed concerns over the affect the board’s decision would have on future development, as well as those who had water rights downstream.

“SWCD was concerned that the (state board’s) appropriation of such a large amount of water at the lower end of the basin could impair small-scale future development within the San Miguel and Dolores River basins,”

Whitehead said in an email. “An in-streamflow call by the (state board) could extend upstream to junior water
right owners throughout the basins.” Initially, the SWCD requested the state board set aside a 1 percent
allocation of all flows, called a depletion allowance, for future water users. The state board, however, decided there wasn’t enough evidence to support the request.

Following the denial for the depletion allowance, the SWCD filed suit, questioning the board’s authority to allocate the in-stream flow. Not everyone agreed with the SWCD’s decision to fight the state board in court. Several conservation groups were pleased with the court’s decision to side with the state water board.

“We believe this decision not only protects the beautiful Dolores River, but affirms the use of this vital tool to leave a legacy of healthy rivers throughout Colorado,” Jimbo Buickerood, public lands coordinator for the San Juan Citizens Alliance, said in a press release.

It’s unclear if the SWCD will appeal the case to the Colorado Supreme Court. Whitehead said he was unable to comment at this time. With the decision handed down in early April, the district has until the end of May to decide on next steps.