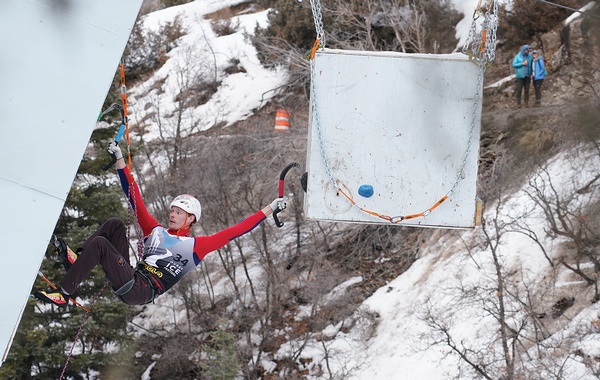 Gymnastic performances of strength and control; upsets and narrow misses; and sharp, pointy metal things flying through the air: The climbing competitions at the annual Ouray Ice Festival are high-quality entertainment. But the spectacle, held in late January, has long been restricted to festival-goers, the few thousand or so people who congregate to watch the competition from the rim of the Uncompahgre Gorge in the Ouray Ice Park.

This year, though, excited spectators won’t even have to lace up their boots to enjoy the competition. With a pandemic raging, an in-person festival was out of the question. But the festival will still take place – albeit in a virtual format that will feature, among other things, a livestream of the flagship elite competition Sat., Jan. 23.

The Ouray Ice Park has been open to recreational climbers since the start of the season in December, with mask-wearing and social-distancing requirements. It was the hope of the staff and board of Ouray Ice Park, Inc. (OIPI), the nonprofit organization that operates the Ice Park and organizes the festival, to figure out a way to safely run the festival’s competition, with guidance and approval from local and state health officials.

“We cancelled a lot of the components of the festival that aren’t compatible with COVID protocols and keeping the community safe,” OIPI executive director Peter O’Neil said. “We decided we wanted to make sure we could do (the competition), because that’s part of the soul of the Ice Park.”

The festival in Ouray, now in its 26th year, has long served as a get-together for the ice climbing community, with everyone from novices to professionals traveling to Ouray to its world-class ice. In years past, its schedule of events has included, in addition to the climbing competitions, clinics, multimedia presentations, auctions and parties that thumped late into the night.

Sure, 2021 won’t be the same festival that climbers from around the world have come to know and love. But, OIPI has created a lot to get excited about it.

The festival’s auction, like the elite competition, has moved online and will feature some of the latest ice climbing and outdoor gear from festival sponsors. Local artists have also donated to the pile of goodies. Last year’s in-person auction raised around $19,000 for the Ice Park, and festival directors hope to break that number this year. Funding for OIPI comes solely from sponsors, private donors and memberships to the Ice Park (memberships are encouraged, but the Ice Park remains free and open to the public).

In-person clinics with professional guides and athletes are still on offer this year, but with a different structure. “Rather than having all the clinics on a single4  weekend, there’s actually five weekends (of clinics),” Lance Sullins, owner of Peak Mountain Guides, one of the local guide services hosting the clinics, said. “There are, in total, more clinics over those five weekends, but on any given weekend there are significantly fewer.” This is good news for climbers, who will be able to find plenty of open ice not occupied by clinic participants.

The highlight of the festival will be the live broadcast of the Elite Mixed Competition. A professional film crew will take viewers inside the action as athletes attempt to ascend a route that features a little bit of everything – of which a steep section of ice is the easiest part. They will begin by “drytooling” on bare rock at the base of the gorge before sinking their tools into a section of ice that takes them to the lip of the canyon. From there, they will transition onto a man-made tower equipped with a sparse collection of artificial climbing holds. This is where the nail-biting action will happen, as the steepness of the wall and arrangement of the holds require incredible strength and endurance just to hang on, let alone reach the top. Climbers are awarded a higher score for each successive hold they reach.

“Many of the competitors that have podiumed over the last several years are planning to come this year,” said Sullins, who is also the festival’s competition director. Last year, a visiting group of Russian climbers dominated the competition.

However, the structure of the competition has changed drastically this year, Sullins explained. In previous years, they would accept as many athletes as they could get through the route in a day, he said. But this year, the competition begins with two qualifying rounds, which will allow more climbers to compete and will broaden the field to include younger competitors. “We’re expecting somewhere between 40 and 45 people to enter qualifying rounds, and we’ll take the top 16 competitors for finals on Saturday,” he said.

Fans watching from Durango will have a lot to cheer for, as several of the athletes slated to compete hail from this side of Red Mountain Pass, including young guns Liam Foster and Catalina Shirley, both of whom placed fourth in the men’s and women’s divisions, respectively, in the Elite Mixed Comp last year.

The festival will also feature a speed climbing competition, an entirely different event in which adjacent climbers all but run up near-vertical ice in an effort to be the first to the top. This competition, scheduled for Sun., Jan. 24, won’t be broadcast live like the elite comp, but photos and videos of the event will be posted on the Ice Park’s Instagram feed throughout the day.

Since the birth of the Ice Park in the early 1990s, ice climbing has changed Ouray, transforming it from a sleepy mountain town to a winter sports destination. Now, according to O’Neil, the Ice Park accounts for 60 percent of Ouray’s winter economy, a number that may well be on the rise, with Ice Park visitation already up 13 percent from this time last year.

There’s no doubting the potential that various groups see in the Ice Park, the Ice Festival and Ouray in general. A coalition of four divisions of Colorado’s Office of Economic Development and International Trade, the Colorado Lottery, and the City of Ouray all pitched in to make the virtual festival a reality – more than $100,000, which O’Neil said is “mostly going right out the door to do the live streaming.”

“All of these entities understand the value of the Ouray Ice Park to the state of Colorado, the community of Ouray, and the ice climbing community,” he said.

For decades, Ouray represented the cutting edge of ice climbing in North America. But, O’Neil said, “Ouray has sort of lagged behind over the last five years, and the world has passed us by in terms of (competition) ice climbing.”

Changes to the Elite Mixed Competition reflect an effort to return Ouray to the forefront. The structure and rules have been modified to adhere more closely to the standards set by the International Climbing and Mountaineering Federation, aka UIAA, the governing body of international ice climbing competitions. OIPI will bring in Canadian Nathan Kutcher, the only UIAA-certified route setter in North America, to place the holds on the competition wall, rather than using route setters of years past. And a UIAA-certified judge will sit on the competition jury.

Feelings on the move to international standards are mixed. “Some people are excited and other people are going ‘Oh, you’re screwing it up,’” said O’Neil. “But we want to get back into a leadership position in the ice climbing world, and part of that is working with the UIAA.”

While the competition in Ouray isn’t an official UIAA event, they have agreed to host the livestream of the competition on its channels. “They claim to have 3 million viewers on social media around the world,” O’Neil said, which would represent “a huge opportunity for the town of Ouray and the state of Colorado.”

Perhaps the direction the competition is heading this year – out of the gorge and into people’s homes – is simply the next step in Ouray’s evolution in the ice climbing world. O’Neil is optimistic: “Could we potentially get on the world circuit down the road? Who knows? But unless we sort of advance the standard, there’s not a chance.”

The festival’s livestream link can be accessed from the Ice Festival’s website: ourayicepark.com/ouray-ice-festival. 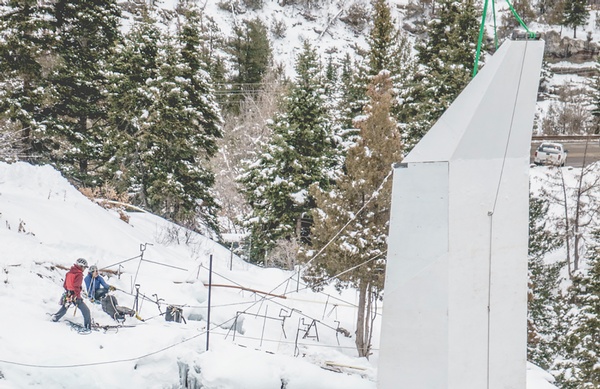 The tower that tops the 2021 Elite Mixed Competition route is lowered into place by crane. This year, the tower is 8 feet taller than in previous years. Route setters will swap out holds by headlamp each night between qualifying rounds and the finals on Sat., Jan. 23./ Photo by Jacob Raab

• Competitions: The Elite Mixed Competition finals will be livestreamed Sat., Jan. 23. The link to the stream can be accessed at: ourayicepark.com/ouray-ice-festival. Updates from the qualifying rounds on Thurs. and Fri., Jan. 21 and 22 (as well as the Speed Climbing Competition on Sun., Jan. 24) will be posted on the Fest’s website and social media channels.

• Online auction: The auction opens at 10 a.m. Mon., Jan. 18 and closes Mon., Jan. 25. It can be accessed from the Festival’s website: ourayicepark.com/ouray-ice-festival. All proceeds go to fund the Ouray Ice Park.

• Closing ceremony and virtual fundraiser: An online ceremony and fundraiser benefiting the Ouray Ice Park, featuring athletes and other special guests, will take place online at 5 p.m. Sat., Jan. 23. Registration is required but the event is free. Register at ourayice park.com/ouray-ice-festival.

• In-person clinics: Spots in Ice Festival clinics at the Ice Park throughout January and February are still available. For more information, visit ourayicepark.com/clinics.