Taking care of business
Locals rally to support evacuees, firefighters, main street and each other 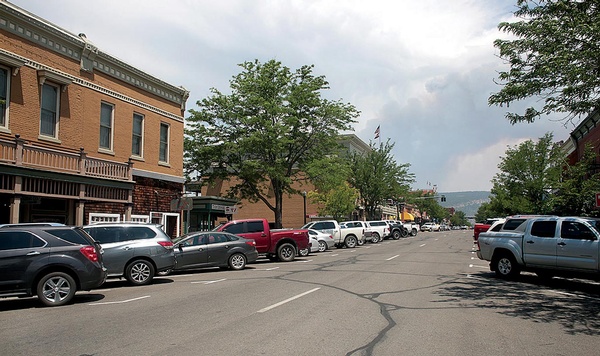 Main Avenue parking spaces were relatively full this week, despite a looming smoke cloud. One of the silver linings to the smoke cloud, however, has been the rallying of locals to help each other and main street weather the storm./Photo by Jennaye Derge

No question, it’s a challenging a time for Durango, La Plata County and the entire Southwest.

The D&SNG is parked at the station, and 150 employees have been furloughed. Purgatory Resort has locked the doors, and its employees are also out of work. The San Juan National Forest is completely closed. The City of Durango and La Plata County officials have closed several trails and open spaces. Thousands of homes have been evacuated, and tens of thousands of acres have burned. And, it’s not over yet.

Through all the smoke and fire, though, is another story.

This is not the first challenge this area has faced. From the Missionary Ridge and Valley fires in 2002 to the Gold King
Mine spill in 2015, residents in Durango and La Plata County have always risen to the challenge. And, according to business leaders and locals alike, this will be no different.

“That’s what Durango does,” Tim Walsworth, director of the city’s Business Improvement District, said. “We rally.”

With that in mind, several area businesses and organizations have created special offers and organized campaigns to support evacuees and firefighters. From free books to free meals, they’re stepping up to help out. But, that’s not all.

Many of those same businesses, along with Local First and the Business Improvement Dis-

trict, are promoting a local first movement and getting the word out that this community is open for business.

“What our message has been for people visiting the area – there’s still plenty to do,” Walsworth said. “Go on the river, take a raft trip. Go to Mesa Verde. Visit Chaco Canyon.”

Even the Rocky Mountain Incident Management Team is helping. Included in the official daily updates for the 416 and Burro Fires is the message, “There are still countless recreational opportunities available and Southwestern Colorado is open for business.”

For locals, Walsworth has a similar message – shop local. Instead of buying your aunt’s gift online, he said, buy it downtown. Enjoy a meal at a local restaurant, or take the kids out for ice cream.

Most recently, she said the district ranger for the San Juan National Forest, Matt Janowiak, stopped by on his only day off since the 416 Fire started on June 1. He told Burford he was there “to support local business.”

And, according to Burford, he’s not the only one to come in with local support in mind. “That makes me feel so proud and so much a part of this community,” she added.

Burford admitted it’s been strange waking up to the dense smoke and not being able to see the mountains. She’s even had an employee with asthma who couldn’t come in because of the thick smoke in the air. It’s a reminder, she said, of just how broadly impacted everyone in the community is.

Watching from afar or catching the 30-second summary on the national news doesn’t tell the whole story – and the part that’s missing is this area needs the business.

When the 416 Fire first ignited the morning of June 1, the busy summer tourism was just getting started.

Schertz said this time of year is usually the entrance ramp to a big summer season, and it feels odd for things to be settling down at Maria’s.

Although the bookshop, like many other businesses downtown, is starting to feel the slump, Schertz said there are people suffering more than they are – like the evacuees. With that in mind, Maria’s has aside a special selection of books evacuees can get for free.

Schertz said they’re also focusing on the good, trying to keep it flowing through the community and remain
grateful for what they do have – like more than 1,200 firefighters battling the Burro and 416 fires.

Not only was Maria’s one of the first to hang a “Thank You Firefighters!” sign outside its business, it’s also offering discounts to firefighters.

Local First, the Durango-based nonprofit promoting business across La Plata County, has also found a way to support firefighters – and businesses in the area.

They plan to donate 100 Local First coupon books to the firefighters. Giving the books, which come out every year and are filled with coupons for free items and discounts, is a way to say “Thank you” to firefighters, said Local First executive director Monique DiGiorgio. It’s also a way to support local businesses.

“In some ways, the fires really underscore the work that we do,” DiGiorgio explained.

The nonprofit is also working with volunteers in the Business Improvement District’s Ambassador Program to hand out coupons along Main Avenue for things like free hot cocoa or socks. The idea is to help visitors feel welcome and support locals at the same time.

“The community obviously supports each other, encouraging folks to spend their money in town. That’s the shining light I’m seeing,” Jeremy Dakan, owner of Pine Needle Mountaineering in the Main Mall, said.

One of the things Dakan is doing to support the community and, in particular, all those who’ve been forced to leave their homes, is collecting gift cards for evacuees.

The idea is to collect gift cards for things like gas, restaurants and movie tickets. It will give evacuees a night out on the town and allow them to take a break from the concerns they’re dealing with. And, again, it’s also a way to support local business.

In addition to the gift cards, Pine Needle is helping the Durango Food Bank with a collection event at Walmart in the coming week and inviting members of the Boys & Girls Club of Durango to design a new window display supporting firefighters.

Dakan said his shop was busy at the beginning of the month, however, things have slowed in the past week. For now it’s holding steady, he added, but he doesn’t expect that to continue for long.

“I think the vibe with everyone is ‘batten down the hatches’ for a long road ahead,” he explained.

Other stores along Main Avenue, like Magpie’s Newsstand Cafe? and Fired Up Artisan Pizza, have said they felt the same drop in foot traffic.

According to Walsworth, it’s too early to tell just how much the fire has affected businesses downtown. The top indicator is sales tax collections, which are typically a couple months behind.

He knows people are worried and even scared, but this community always perseveres. “If this proves to be a long term event,” he said, “we really need locals to do everything they can to support our local businesses.” 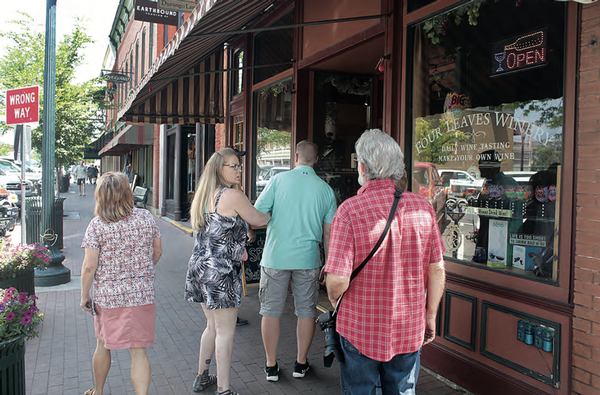 olks check out Main Avenue's offerings this week.Typically Durango's busy time, summer's downtown traffic has taken a hit. But businesses are trying to stay optimistic and get the "support-local" message out more than ever./Photo by Jennaye Derge

A little help from friends

Other opportunities for evacuees:

• The Raven Narratives upcoming live storytelling performance, “Privilege,” is free to evacuees. The event runs 7:30 p.m., Fri., June 15, at the Sunflower Theatre in Cortez and 7:30 p.m., Sat., June 16, at the Durango Arts Center