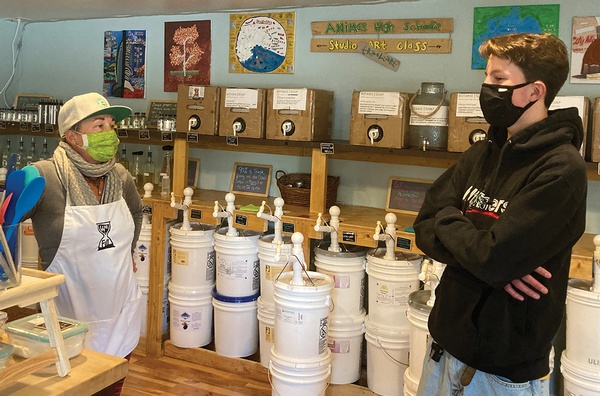 Owner of WeFill, Cristin Salaz, left, and Animas High School junior August Gates talk about the "Trash Art" auction. Nine works from AHS students are being auctioned off to help The Hive./Photo by Missy Votel

When life give you lemons, you make lemonade. Or – in the case of Animas High School art students – when life gives you trash, you make art.

Last fall, AHS art teacher Britt Blasdell tasked her class with coming up with works of art that depicted the impacts of human-generated waste on the Earth and its ecosystems. The students were also asked to incorporate everyday trash they found, from plastic bags to bottle caps and straws, into their works. The resulting nine pieces, known as the “Trash Art” exhibit, were then displayed at WeFill, a local zero-waste store committed to reducing single-use plastic.

And now, after several months of adorning the walls at WeFill, the pieces will be going to yet another use: helping to raise money for a local nonprofit.

The “Trash Art Auction” was the idea of AHS junior August Gates, who came up with the idea in a lemons-to-lemonade moment of his own. As part of his requisite junior year internship at AHS, Gates – an avid skateboarder – had planned to intern at a skateboard company in Portland, Ore. However, when that fell through because of the pandemic, he was forced to switch gears. That’s when he heard that WeFill owner Cristin Salaz was looking for an intern.

“Climate change and reducing single-use plastic is really important to me,” Gates said. “I’m really interested in what Cristin’s doing, and it piqued my interest.”

Together, the two came up with the idea to auction off the pieces online.

“The art looks great on my walls, and since the pieces have been up, lots of people have come in and asked about them,” said Salaz.

As for a recipient of the proceeds from the auction, Gates settled on something near and dear to his heart: skateboarding. All of the money raised – the goal is $600 – will go to The Hive, a youth-centered community hub, which is trying to raise funds for an indoor skatepark.

“Other than Colorado Springs and Woodward (Copper), there are not a lot of indoor skate parks in Colorado,” said Gates.

However, he noted the goal with the auction is twofold. “Our goal is to raise money for a local nonprofit organization that focuses on the community,” he said. “We also want to raise awareness about Cristin’s business and spread the word about reducing plastic waste.

The online auction opened this week and runs through May 12 at: auctria.events/AHSTrashArtAuction, a website that Gates set up. The pieces can be viewed online or seen in person at WeFill, 3465 Main Ave., Tuesday-Friday, 12 noon – 6 p.m. In addition, folks who don’t want to bid on the art can still make a donation to The Hive fund-raiser via the webpage as well. 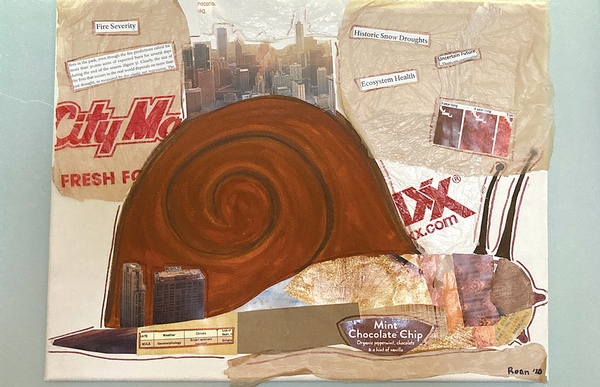 One of the works up for auction, a repurposed snail, by Roan Harvey

What: “Trash Art” auction featuring art by Animas High School Students
Who: Proceeds go to The Hive to help fund an indoor skatepark
When: Through May 12;
Where: auctria.events/AHSTrashArtAuction or WeFill, 3465 Main Ave., Tues.- Fri., noon – 6 p.m.