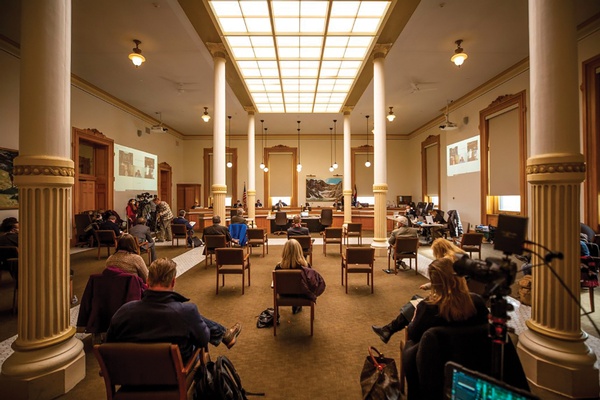 A hearing on election integrity at the Colorado State Capitol on Dec. 15. The hearing was held at the request of state Republican lawmakers to investigate the state's election system. After much ado, it was determined there was no "there there" regarding claims of voter fraud./ Photo by Kevin J. Beaty/Denverite

Colorado’s “gold standard” election system was under the spotlight Tues. Dec. 15. It was the day after the state’s electors cast ballots for Democratic President-elect Joe Biden and Vice President-elect Kamala Harris, who won Colorado’s popular vote by over 13 points.

The state’s Republican-led Legislative Audit Committee convened the meeting on election integrity at the Colorado Capitol, featuring a roster of GOP election officials as witnesses, as well as a prominent member of President Trump’s post-election legal team.

The hearing was a departure from the bipartisan committee’s usual work.

Typically, the audit committee meets to hear the results of investigations into state departments and agencies. The committee cannot audit counties, which administer elections, or private companies, which make the equipment for those elections.

About a dozen people testified at the committee’s invitation, and none presented evidence of widespread voter fraud in Colorado. Most spoke instead to the strength of the state’s system and some suggested areas of improvement.

The president’s senior legal advisor Jenna Ellis was the first witness. Ellis participated remotely and brought up general accusations against Dominion Voting Systems. The company, which has played a starring role in Republican conspiracy theories about election-stealing, is headquartered in Denver and used by 62 of Colorado’s 64 counties.

“I would encourage this committee to look at not only the administration of the elections in our state, but also to take a look specifically at why the Dominion voting systems is a part of our elections here in Colorado, as well as the mail-in voting system,” said Ellis, who did not offer any specific evidence of election fraud in the state.

Dominion’s technology was selected by a bipartisan committee under the administration of former Republican Secretary of State Wayne Williams and has been independently tested and audited hundreds of times. Colorado is one of the few states in the country that goes back after elections and checks the tallies on machines against the votes on the original paper ballots, a process known as a risk-limiting audit.

“I can state that in Colorado, our voting systems accurately record the votes of every Coloradan, and we’ve proved it with respect to Dominion 868 times,” Williams told the committee. He also added that in Georgia, which also uses Dominion, the results held up after a full hand recount.

“There is no one in Moscow, nobody in Beijing, nobody in Antifa, nobody in the Trump campaign that has changed a single ballot in the state of Colorado because you physically can’t do that unless you broke into the clerk’s office, you bypass the cyber locks, you somehow circumvented the 24-7 video surveillance and the security protocols that are in place,” Williams said.

The state’s current top election official, Democratic Secretary of State Jena Griswold, declined an invitation to answer questions during the hearing and instead submitted 4 a written statement testifying to the system’s reliability.

Republican members of the audit committee attended in person, while Democrats participated remotely. The hearing brought enough people to the Capitol that the state set up an overflow room in order to maintain social distancing. Extra law enforcement officers were stationed in the building, but there were no disruptions.

Since the November election, the response from Colorado Republicans to the results – and to President Trump’s unrelenting attacks on them – has varied significantly. GOP chair, U.S. Rep. Ken Buck, held an event with Republican election officials that aimed to dispel conspiracy theories but he also signed an amicus brief attempting to throw out the election results in four crucial states. A group of state House Republicans also asked for an investigation into Colorado’s results and questioned the election’s reliability based on unsupported fraud claims.

The hearing appeared to try to walk a middle line, with witnesses both defending and raising concerns about the state’s election integrity.

An equal number of Democrats and Republicans serve on the Audit Committee, and the chair rotates between the parties. Currently, it’s held by GOP Rep. Lori Saine, of Weld County, who called the hearing over the objections of Democrats on the panel. At one point in the hearing, Democratic Sen. Rhonda Fields, of Aurora, said the meeting was “ridiculous.”

“I’m just really disappointed that we’re using state dollars and resources to address fraud. It has not been established even on a national level. I don’t even know how many judges have turned out saying that there’s nothing here,” Fields said. “There’s nothing. A nothing burger, nothing here.”

Democratic Rep. Tracy Kraft Tharp, of Arvada, called the hearing “unprecedented.” But she also said she hopes some good comes out of it. “I hope it’s making people feel more confident (in the voting system),” she said.

However, Republicans on the committee defended the value of this day-long dive into the state’s election functions.

Saine said she got a great sense of the election system’s strengths and weaknesses through the testimony.

For Republican Rep. Dave Williams, Colorado Springs, who was part of the group that asked for the “forensic audit” of Dominion, the hearing offered some comfort, while raising other concerns. Williams said he’d still like to see an audit of the Dominion software, more focus on removing ineligible people from voter rolls and new laws to reduce the ability of someone to collect and return numerous ballots on behalf of other voters.

“We believe that regardless of our policy disputes, that at the end of the day, we’re settling it at the ballot box and not through violent means. And I think for the longest time, the American public and politicians have maybe taken that for granted,” said Williams. “Now with the questions that have been raised around this election cycle... we have to do whatever we can to make sure that we’re putting to rest any and all doubt.”

The hearing concluded with the Repulicans requesting that the Colorado Auditor’s office conduct a performance audit of the Secretary of State’s office. That effort failed on a 4-to-4 party-line vote, with one Democrat dismissing the idea as a “fishing expedition.” The office was last audited in 2015.

For more stories like this from Colorado Public Radio, go to www.cpr.org. n 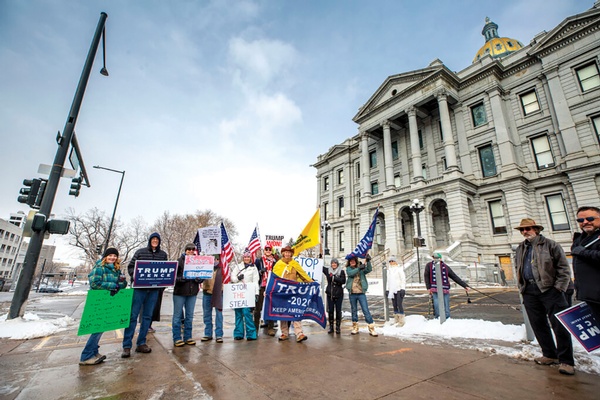 Trump ralliers in front of the Colorado Capitol on Dec. 15. A day earlier, Colorado's electors cast their votes for President-elect Joe Biden, as did a majority of the country's electors./ Photo by Kevin J. Beaty/Denverite