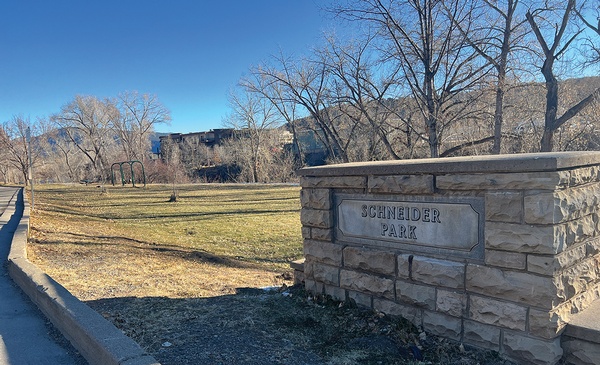 Pickleballers rejoice: Schneider Park will soon be home to six new courts. But be forewarned – parking is limited, so you'll have to park across the river or, better yet, ride your bike./?Photo by Missy Votel

One of the main reasons people move to Durango is to enjoy the seemingly endless system of surrounding parks, trails and open space that almost form a bubble around town.

What people typically don’t move here for, however, is to read hundreds of pages of the City of Durango’s budget to find out just how their local government officials plan to improve existing areas and establish new ones for our enjoyment.

Anyway, the City of Durango is poised to adopt its 2023 budget Dec. 6, so we thought it would be good to dive in and see what projects are planned for the coming year on the parks & rec side of things.

We also sat down with Scott McClain, the city’s Assistant Parks Director, to help us navigate the tedium of revenues, expenditures and other budget jargon. So, let’s start at the top, money-wise. It should be noted some funds budgeted include assistance from outside sources, like grants or government partnerships.

Decades ago, the Animas River Trail was envisioned to become the centerpiece of the City of Durango’s trail system, both for recreation and commuting around town. More specifically, city planners dreamed of connecting the north end of town, near Oxbow Park & Preserve, south through the heart of Durango, and then toward Three Springs, a burgeoning community east of town.

Once completed, people would be able to make the more than 10-mile journey uninterrupted by city streets. It would also allow people to forgo their cars and commute easily around town.

The connection to Oxbow Park & Preserve was completed in 2020, leaving the final stretch, from behind Home Depot to Three Springs, as the final piece of the puzzle. Now, the end date is tantalizingly close.

The City of Durango has budgeted $3.2 million to finish the Animas River Trail envisioned all those years ago. But it won’t be a walk in the – look away, bad pun alert – park.

McClain said the city is still working with two separate property owners that own land between Durango and Three Springs. Both property owners are supportive of the trail, so that’s good, but there is some wrangling to be done over the exact alignment.

Once that’s settled, the city plans to start construction, hopefully in 2023. The additional $1.79 million is budgeted in case construction spills into 2024, which, given the slog of construction projects these days, is likely.

Ultimately, the Animas River Trail will head east from where it dead ends behind Home Depot, up River Road and to the Sale Barn Trail, a popular trailhead on the Grandview side of Horse Gulch. From there, the trail will wind over to a section of trail near the Colorado Department of Transportation’s new Highway 160 interchange.

And it could not come at a more important time as Three Springs continues to see major development. “It feels like all of a sudden, there’s a community out there,” McClain said.

If you haven’t heard, zebra and quagga mussel infestations in the West are a huge issue, which can quickly take over waterways, clog reservoirs and endanger other aquatic life. It turns out, motorized boats are a significant transmitter of the invasive species.

Colorado Parks and Wildlife has led inspections at state parks and other recreational areas. A full blown infestation in Colorado was staved off for years, until this year, when Highline Lake near Fruita became the first official infestation in the state. So, needless to say, agencies are on high alert.

In 2023, the City of Durango plans to install a new decontamination facility at Lake Nighthorse, which will be a huge upgrade from the existing system there, McClain said.

As part of the project, the city also plans to reconfigure the entry/parking area of Lake Nighthorse to help with traffic flow. The total cost of the $1 million project is being split with the Bureau of Reclamation.

Will the impassioned complaints about no place to play pickleball in Durango come to an end in 2023? Well, the City of Durango is indeed building new courts. As for satisfying the passionate pickleball constituency? We’ll see.

A total of $800,000 is budgeted to build six new courts at Schneider Park, which sits on the west side of the Animas River, adjacent to the skate park. The choice was between Schneider Park and Smith Sports Complex near Fort Lewis College, with Durango city councilors making the final call.

The good? Schneider Park is located right downtown, next to the river trail. And, the new courts are expected to boost activity at the underused park, McClain said. The bad? There’s limited parking at the park, so users will have to park across the river behind Backcountry Experience and walk over the bridge to the courts – or better yet, ditch the car and walk or ride your bike for a game of mini-tennis. Hey, you’re in it for the exercise, right?

Next year, the city plans to replace the small tow rope on the north side of Chapman Hill with a completely new and improved rope system. Also, the new system will be pushed to the northern edge of the ski area. As a result, the two rope tows at Chapman will be on the edges of the hill, opening up more of the middle area for skiing and jibbing.

“Both of the lifts there are extremely dated and an ongoing maintenance issue,” McClain said. “This will help get new equipment in there on the smaller tow rope and create a better layout.”

The big tow rope is scheduled to be replaced in 2025. In the meantime, duct tape up those Kincos if you’re planning to hang on till the top.

Back to our old friend the Animas River Trail, where time and extensive use has taken its toll. Back in the day, parts of the original trail were built with asphalt, which doesn’t handle wear and tear well over time. Within the past few years, the city has sought to replace the entire trail with concrete. In 2023’s budget are the last remaining sections that will be upgraded.

The most expensive ($1.35 million) is the section from north of Santa Rita Park, past the Double Tree Hotel to behind Albertsons, which will be repaved, widened and upgraded with new lighting.

The next section is Santa Rita Park south to CR 210, the area behind Nature’s Oasis (about $1 million). The budget also includes finishing touches on the northern end of the trail from behind Durango High School to the Durango & Silverton Narrow Gauge Railroad tracks. Because the project involved an area of the railroad tracks, it required the Public Utilities Commission to get involved.

Completely transforming the mesa above and just to the east of Durango is going to be a decades-long effort, but agencies are chipping away. Ultimately, the mesa will feature an outdoor concert venue, a premiere mountain biking park and a new fairgrounds.

For 2023, however, the city set aside $1 million for moving the project forward. Not all those funds will be used, McClain said, depending on other partners and how much progress is made (it’s a complicated affair with a lot of moving parts). But, it appears construction will begin on some single-track trails on city-owned land on the north side of the mesa that ties into Horse Gulch, so there’s that.

Every year, the city sets aside funds to upgrade, improve and maintain facilities at the Durango Rec Center as well as the parks and trails around town.

Past projects have included the playground replacement at Hillcrest View Park and the new pool at the Durango Rec Center. McClain said city staff will meet with Durango city councilors at the beginning of the year to identify which projects are a priority and should be included in the 2023 work schedule.