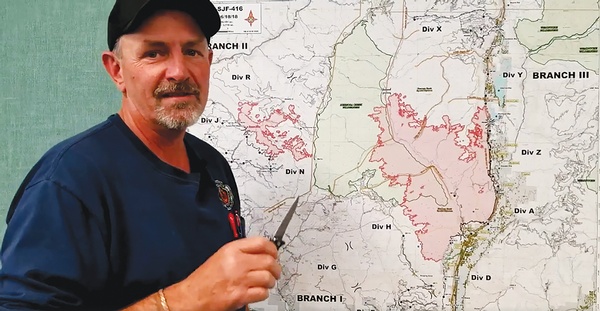 Rob Powell, Operations Section Chief for the Type 1 Incident Team who worked on the 416 Fire, said using his infamous "switchblade" pointer during Facebook videos happened by accident. But, he admits, it's now part of his brand. He used it making videos for the Decker Fire, which burned near Salida in October. Powell will be the guest speaker at "The 416 Recovery Celebration," a fundraiser and awards ceremony from 5:30-7 p.m. on Wed., Nov. 20, at the Henry Strater Theatre, 699 Main Ave./Courtesy photo

Some admired his down-to-earth demeanor. Others appreciated the conversational style and respected his wealth of knowledge. But, what really turned him into a local legend was the pointer.

Rob Powell, who served as the Operations Section Chief for the team working on the 416 Fire, started  posting video updates for residents on Facebook less than a week after the blaze ignited. Every morning locals could get information on exactly where the fire was, how it was behaving, and what the team’s plan was for the day – directly from the people who were fighting it.

“It gets popular right away because it’s a tool,” Powell said. “If you’re getting it first hand, they appreciate that.”

The information was invaluable to residents who were evacuated, preparing to be evacuated or unsure of what was happening north of town.

As serious as it was, Powell’s presentation made a lot of people smile.

His commentary about going “around the horn,” as he described how the fire was spreading, the “catcher’s mitt” analogy to explain what his team was doing to contain it and the hellos to his granddaughters back home gained him many fans.

When discussing operations to the north, he always talked about how he couldn’t mention Graysill Mountain, north of Purgatory, without wanting to call it Grayskull, the castle and refuge for He-Man in the ’80s cartoon – something that inspired viewers to suggest it should be renamed in his honor.

But, perhaps the key moment for Powell was when he needed a pointer.

In one of his early updates, he was reporting on some spot fires that had ignited at the southern end of the burn area. He reached into his top pocket, whipped out a small switchblade and the rest is history.

Not long after the 416 Fire started June 1, 2018, the Rocky Mountain Type 2 Incident Management Team took over operations. Powell said that team – which he worked on in the past – had put a good plan in place, and the Type 1 Team just followed it through when they took over June 9.

The team’s overall strategy, he explained, was to protect private property. The team saw no need to send crews into some of the steep forest terrain around Hermosa Creek.

“There was no reason to go in there and put people at risk,” he added.

It’s something Powell said has changed since he first started battling wildland fires more than three decades ago – identifying what the risks are and the benefits of taking those risks.

“We can put people in there,” he explained. “But how are we going to get them out?”

Powell said a lot of things have changed over the years – adding how the management of large fires has truly become an interagency machine, instead of just something the U.S. Forest Service tackled alone. But the biggest difference is how everyone looks at the big picture.

“There’s a lot more ‘Why’ questions in the decision-making process,” he added.

Powell plans to detail some of the decisions made by the team on the 416 Fire, and why those decisions were made, during two events next week hosted by Mountain Studies Institute, a nonprofit research and education center based in Silverton.

It’s a fundraiser for the institute as well as an awards ceremony, featuring Powell as the guest speaker, a silent auction, champagne toast and more. Organizers plan to recognize several area residents who played key roles during the 416 Fire with a special “Mountain Visionary” award honoring Ed Zink, who passed away Oct. 11.

The second event is a public forum on the 416 Fire and Mountain Studies Institute’s recovery efforts, happening the following day at 6 p.m. Thurs., Nov. 21, at the Durango Rec Center. It’s free, open to the public and features a Q&A session with Powell – and his pointer.

It actually wasn’t in Powell’s original plan to battle wildland fires for a living. He worked for the local fire department in his hometown of Rapid City, S.D., for about 30 years before retiring.

To the Durango community’s benefit, though, his idea of retirement is working for the Rocky Mountain Type 1 Incident Management Team, which he’s been doing for the past three years.

Much like Durango, Rapid City has many areas where the city meets the forest – and human development seeps out into the wilderness, aka the wildland urban interface. Those areas often become the frontlines when wildfires ignite.

In the late 1980s and early ’90s, the West experienced what Powell called some “big fire years.” He and other firefighters in his community were called upon to help tackle wildland fires in the area around Rapid City. Over the years, as his experience grew, those leading the charge in the fight against wildland fires knew they could count on Powell.

In fact, he first came to Durango in 2002 as part of an incident management team fighting the Missionary Ridge Fire. “I was actually the guy on the fire line,” he recalled.

He talked about how grateful and helpful the community was back then, and still is today.

When he worked on the Missionary Ridge Fire, Powell remembered the community had set up a support camp with everything from snacks to haircuts.

“It was just an amazing experience,” he added. “I’ve measured all fires to that ever since.”

The experience was similar during the 416 Fire when residents came out of the woodwork to offer whatever they could to help – coffee, meals, massages and more. This time, Powell even got his back adjusted by a local chiropractor.

It’s not that other communities aren’t just as supportive, he explained. But, there’s something special about Durango and La Plata County.

In addition to the outpouring of support from residents, working with local leaders – including the Durango Fire Department, County Sheriff’s Office, San Juan National Forest officials, La Plata Emergency Management Team and more – was not like other places Powell had been either.

“The overall cooperation was amazing,” he said. “If I could live in Colorado, I think that’s where I would want to be.”

After the fire's out 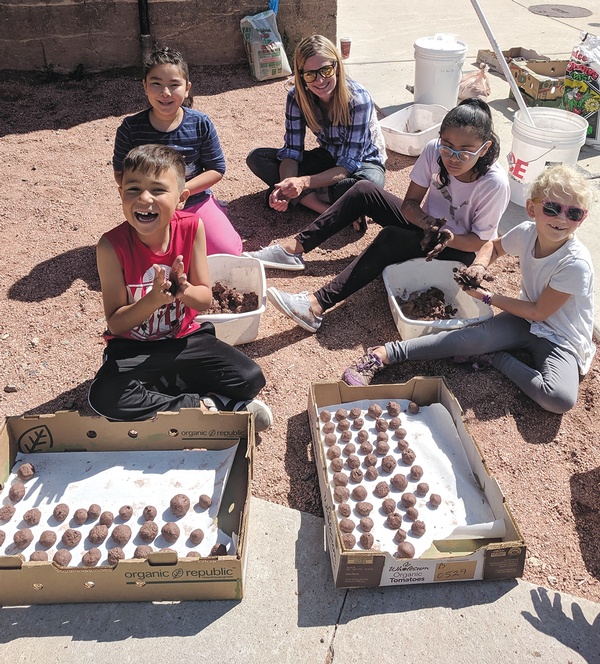 Mountain Studies Institute partnered with students in Silverton, pictured above, to make seed balls to be used for replanting in the Hermosa area. The students learned about fire ecology and the importance of pollinators./Photo by Amanda Kuenzi

The real work for researchers at Mountain Studies Institute, a nonprofit based in Silverton, began when the smoke cleared.

Along with collaborative partners – like Durango Nature Studies, the Animas River Community Forum and others – MSI began to address the scores of monitoring and recovery projects needed in the wake of the 416 Fire.

Whether it was planting new seeds with residents of Falls Creek Ranch, repairing trail systems around the burn area with Trails 2000 or installing rain gauges in the Hermosa Creek watershed with La Plata County officials, Mountain Studies Institute has hosted more than 40 events and talks.

One of the goals is to understand how the community and surrounding forests are vulnerable to wildland fire, and how to recover from those fires.

“We all know that we can anticipate seeing more fires on the landscape in the future,” Marcie Bidwell, executive director for Mountain Studies Institute, said. “Taking these major events in stride is an important part of being resilient.”