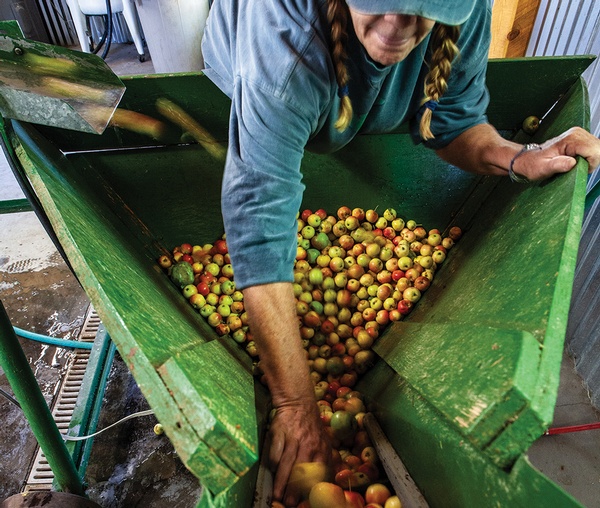 Like your cider with a little kick? There are now not one, but two options for locally made hard cider.

Launched in early 2018, Fenceline Cider (also known as Outlier Cellars) was the OG cider maker, setting up base in Mancos along the idyllic banks of the Mancos River.

Started by Sam Perry and Neal Wight, Fenceline uses apples from the region’s storied historic apple orchards for its line of hard ciders, which are available in its taproom or at local liquor stores. For those who don’t like to venture out in these pandemic times, Fenceline just introduced its new “Cider Club.” Available for shipping nationwide or pick up, Cider Club members receive three curated bottles of Fenceline ciders every four months, based around the seasons. The first shipment debuted for the fall equinox, coinciding with the harvest season. Each quarterly release will also include tasting notes and seasonal field observations from Perry and Wight.

“Since opening the doors to our taproom in Mancos, we have always been inspired by creating a community around the love of craft cider,” Perry said. “Our Cider Club is a portal to share our cider across the country.”

Memberships cost $59 (plus shipping) every three months and include discounts on online and taproom to-go sales, VIP invitations to future events and the option to gift one cider shipment per year to a friend or family member. Order deadline for the first shipment is Oct. 1 (today!) but new members will be accepted throughout the year on a rolling basis. For more information visit: www.fenceline.co/club

There is also a new kid on the hard cider block, EsoTerra Ciderworks, which opened last week in Dolores and is owned by husband and wife, Elizabeth Philbrick and Jared Scott. Also capitalizing on the embarrassing abundance of heritage and rare apple varieties found in Montezuma and La Plata counties, EsoTerra opened in the old Mountain Sun juice factory just east of downtown.

In addition to a tap room, EsoTerra also offers a custom crush facility – a licensed and bonded winery (technically, cider is “apple wine”) that lets other brands make their product in the building.

“This saves them the hassle and cost of establishing a liquor license and the expense of outfitting a building, and gives them the benefit of starting small,” Philbrick said in a news release.

Although they got their cider-making start in Fort Collins, the couple moved to Durango a few years ago and launched EsoTerra with the help of the Southwest Colorado Accelerator Program for Entrepreneurs (SCAPE). They eventually opened up shop along the banks of the Dolores River.