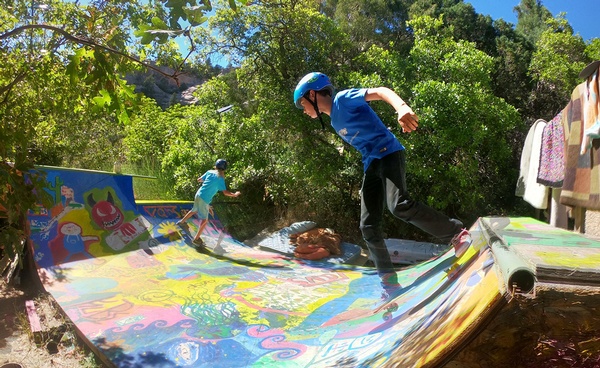 Local kids practice their skills on a ramp designed with their own artwork this summer. The Hive, a new nonprofit youth and community center, hopes to open next year at a yet-to-be-finalized location and offer mentorships in the areas of art, music, outdoors and skateboarding as well as other important life skills. The Hive will be hosting two fundraisers in the upcoming week./ Photo courtesy The Hive

Durango could soon have a new place for kids and teens to buzz around. The Hive, a youth-centered community hub, seeks to offer a safe space and mentorship in the areas of art, music, skateboarding and the outdoors starting as soon as next year.

“Just as bees work together in every effort for the greater good of the entire hive, we intend to operate in the same manner,” she said. “We are committed to creating a space that inspires individuals to better their own lives and the health of the community.”

To help fund the venture, as well as rent for the yet-to-be-finalized space, organizers are hosting two benefits this week. The first, a Halloween Carnival, will be held from 12 noon - 7 p.m. Sat., Oct. 26, at 11th St. Station. The event will feature a collaborative live art wall, games, mini skateboarding park, all-ages talent show and live music from Your Bones, Profectic Calaveras, Uncle Kelsey and the Fearless Peasants.

Then, The Hive will host a “Trasher Thursday Resurrection” on Thurs., Oct. 31, starting at 4 p.m. at the Durango Skate Park featuring skate comps, costume contest, live bands, food and giveaways.

“We’ve always wanted to create a space where youth can come to, so we decided to open a youth center, but also a community center,” said Borland, who also serves as director of the Snowboard Outreach Society (aka S.O.S.) and said she saw a need for such a venue through her work with other nonprofits. She is joined in her mission by Jeff Hamner, who works with kids in art, music and skateboarding at the Juniper and Riverview schools, and Alex Vick, founder of the now-defunct Suite 101 music venue and an active participant in Durango’s “DIY” music scene.

The space will include a stage for shows, room for art and music as well as moveable indoor skate ramps and rails.

“That’s how we engage the kids,” she said of the skate facilities. “I’ve worked with youth enough to know you need to have something cool to engage them.”

In addition, organizers envision The Hive serving as a safe haven for youth and community members to discover and express themselves through creative and artistic outlets. The Hive will also provide life skills and hopes to partner with other local organizations on other offerings.

The Hive recently secured nonprofit status through its fiscal agent, the Players Philanthropy Fund, a national organization. Borland said The Hive has a “very highly prospective” space lined up and hopes to move in by January and have remodeling done in time for a February 2019 opening. She said The Hive will be open to the public but memberships will be available.

The goal of the fundraisers is to make enough money to pay for the first month’s rent. Those unable to attend the fundraisers can also donate on The Hive’s GoFundMe page.