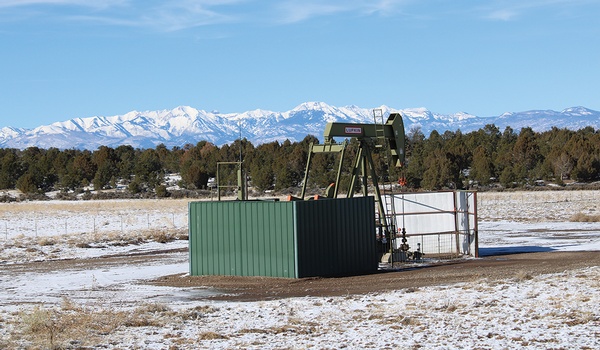 An oil and gas well south of Durango near an area where a Texas company wants to exploratory drill in a previously untapped formation known as the Mancos Shale./ Photo by Jonathan Romeo

Southwest Colorado could be on the precipice of the next big oil and gas boom.

The San Juan Basin, a natural gas and oil field that spans southwestern Colorado and northwestern New Mexico, experienced one of its most productive and profitable periods in the 1990s and into the 2000s. Since 2011. However, development in the basin has stagnated as natural gas prices plummeted and companies have found cheaper places to drill.

But the San Juan Basin has been defined by cycles of boom and bust since the field was first discovered 100 years ago. Now, according to prospective companies and industry experts, it appears the wheels are in motion for the next big upturn in the field’s history.

What’s driving interest once again in the high desert is new technology that allows companies to drill horizontally, along with new methods of fracking. Both have helped to release the potential of a previously untapped formation in the San Juan Basin called Mancos Shale.

In New Mexico, drillers have already seen promising returns of natural gas from the Mancos Shale, furthering speculation the San Juan Basin could make another comeback. On the Colorado side of the basin, companies have yet to drill to get a sense of how much reserves could be stored underground – but not for long.

Last month, Texas company NueVida Resources took the first steps to begin exploratory drilling in the Mancos Shale formation on private property south of Durango. While early in the process, many companies and industry experts regard this move as the first in what could be a monumental event in reviving the basin, which could bring revenue and jobs to producing counties.

But it’s not all rosy. The adverse effects of oil and gas have been well documented in the San Juan Basin, home to an estimated 56,000 wells, and countless pipelines and infrastructure, which have made an indelible mark on the culture and environment of the region.

And, all this comes at a time when there’s virtual scientific consensus that emissions from oil and gas operations through practices like venting and flaring need to be reduced to offset impacts of climate change.

In October 1921, the first commercial natural gas well was drilled in the San Juan Basin, about 1 mile south of Aztec. It wasn’t an instant hit. In fact, it wasn’t until the 1950s, when a pipeline was constructed to ship gas to California and Washington (where most gas is still shipped to this day), that the first boom was set in motion. Farmington, then a rural town known for its apple orchards, skyrocketed from 3,500 people in 1950 to more than 23,000 by 1960.

Despite the vast amount of reserves across the 7,500-square-mile San Juan Basin, like any natural gas field, it has been subject to outside forces that cause periods of prosperity and hardships – an interconnected mix of global prices, supply and demand, and overproduction. The basin crashed in the 1960s, recovered in the 1970s, and then crashed again in the 1980s (the most severe, with entire neighborhoods abandoned).

Yet after every downswing, new technology, demand and incentives seem to breathe life into the field. That’s exactly what happened in the 1990s, when Congress passed tax incentives for coalbed methane production. Along with new drilling methods, this led to one of the biggest peaks in the San Juan Basin. The frenzy brought tons of money to operators and local governments, and at one point, the region became a leading producer of natural gas in the country.

The massive development, however, brought chaos and environmental impacts as vast parts of the region became industrialized with oil and gas infrastructure, often with little oversight. Wells pockmarked the landscape, and hundreds of miles of roads and pipelines were cut through the region. Spills were, and continue to be, a frequent occurrence. Clean water wells started to spew methane, forcing some residents to permanently leave their homes. In a few extreme cases, houses blew up because of methane buildup.

In response, a staunch grassroots effort on the Colorado side of the basin in La Plata County led to new regulations that ensured more protective and responsible development. But for many, those scars on the land are still reminders of the ugly side of an oil and gas boom.

The coalbed methane frenzy fell off around 2011, and ever since, the basin has been active, but leveled off. In the past few years, the field’s biggest operators, such as BP and ConocoPhillips, have sold out and left. Local tax revenues, too, have

seen a steep decline (though in the past few years have recovered as more people and business moved into the region).

But while the basin has been down, it’s not out. Even as BP was planning its exit, the company’s area manager in 2018 said the San Juan Basin still had life left. “La Plata County still has a robust future,” John Mummery said. “We’re constantly finding new formations, implementing new technologies.”

That robust future, it appears, has arrived with companies now eyeing the Mancos Shale, a deep underground formation found throughout the basin. In the early 2010s, operators in New Mexico started exploring the previously untapped reserve, which was made accessible with horizontal drilling and fracking methods.

In a New Mexico Bureau of Geology and Mineral Resources report, it was determined that horizontal wells were nearly 10 times more productive than traditional vertical wells in the Mancos Shale. The formation, according to the report, “has the potential to revitalize the San Juan Basin with both oil and natural gas production.” In a separate USGS report, a rough estimate showed there could be 27 trillion cubic feet of recoverable natural gas in the Mancos Shale.

In October, LOGOS Resources, a Farmington-based oil and gas company, announced that two wells near the New Mexico-Colorado border had some of the highest production rates seen in the past 20 years. The company did not return calls seeking comment. “We believe the Mancos Shale could become one of the leading natural gas shale plays in the U.S.,” Jay Paul, the company’s CEO, said in a statement.

Indeed, Rob McIntyre, a spokesman for the New Mexico Oil and Gas Association, said the renewed interest in Mancos Shale is the first cause for excitement since coalbed methane ran out of steam. But, he said the true potential won’t be known until more exploratory drilling and evaluation is done.

“But clearly, things are going in the right direction,” McIntyre said.

‘Gift that keeps on giving’

Exploratory drilling is exactly what NueVida Resources seeks to do in La Plata County. The company, based in Dallas, did not return several requests for comment on this story.

NueVida filed an application with the state in January for permission to drill, but La Plata County intervened, asking for a Memorandum of Understanding with the company to make sure it complied with health and environmental standards. That agreement was reached in November. Now, NueVida has to go back to the state for approval, and the timeline is uncertain.

The plan, according to county records, would be to drill eight exploratory wells just south of the Durango-La Plata County Airport, near County Roads 309A and 318, an area that has seen previous oil and gas development. The drilling would take place on 1,280 acres of private land – none of the land is on the Southern Ute reservation. When a well is drilled for exploratory purposes, it’s called a wildcat. The last wildcat in La Plata County was around 2013, in a different formation, which turned up nothing. This time, industry experts are expecting a different outcome.

“This is not something that will happen overnight, but if these wells are as prolific as we think they are, you will see other operators come forward,” Christi Zeller, director of the Energy Council, an advocacy group for oil and gas in Southwest Colorado, said.

A shot in the arm is exactly what the San Juan Basin needs, Zeller said. According to state data, about 172 million acre feet of natural gas has been produced this year, with less than a month to go. Near the peak in 2010, by comparison, about 424 MCF was pulled from the ground.

“We couldn’t have done this 20 years ago,” Zeller said. “That’s why I always say, the San Juan Basin is the gift that keeps on giving.”

For others, the prospect of another oil and gas boom is not so much a gift as it is a curse.

Yes, when production years are good, jobs are created, companies profit and local governments see tax revenue. But busts always follow, and more often than not, when companies pull out, they leave messes behind, said Mike Eisenfeld, with San Juan Citizens Alliance, a nonprofit that advocates for environmental health in the region.

“The companies around here are dying,” said Eisenfeld, who is based in Farmington. “And these are very expensive wells with still a lot of volatility in the natural gas market. It’ll be interesting to see what happens.”

In addition to the market, operators also have to deal with newer, stricter regulations. In the 1990s, La Plata County was the first county in the state to adopt rules addressing the impacts of oil and gas. Just recently, the state launched even stricter regulations that place human health and the environment over production through Senate Bill 181. The new rules place an emphasis on reducing emissions, but also address nuisance issues like noise and odor.

“Now the county has so much more authority at the local level than they’ve ever had before,” Lachelt said in an interview with The Durango Telegraph. “If it really is going to be the boom that industry is thinking, then we’ve learned the lessons of how development can be done in a responsible manner.”

Many conservationists, however, are quick to note pollution doesn’t stop at state lines. In New Mexico, which has the overwhelming majority of wells, regulations are far laxer than in Colorado. What’s more, in 2016, NASA discovered the “Four Corners Methane Hot Spot,” a staggering concentration of methane emissions from oil and gas infrastructure across the region. With methane one of the most dangerous greenhouse gases, Lachelt said it’s imperative to go beyond a state patchwork and adopt federal standards for emissions.

“We can’t afford another delay in federal rules that address the climate crisis we’re in the middle of,” Lachelt said.