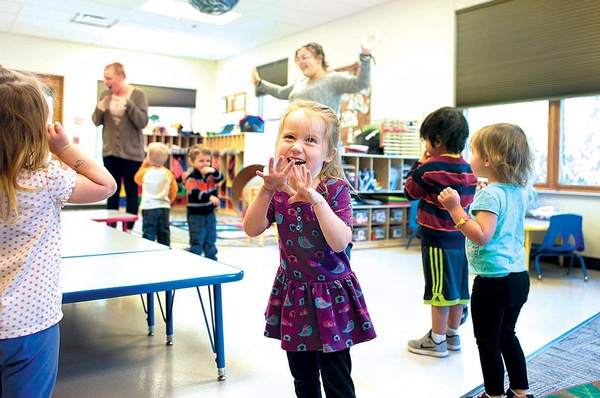 Adley Clark, center, roars at the camera during preschool class at Riverhouse Children's Center on Tuesday. According to industry professionals, research shows how important early childhood education is in the early years. It impacts relationships, skill building and other factors that can last a lifetime./Photo by Jennaye Derge

Forty-three percent of child-care workers in the Four Corners are eligible for public subsidies. Which means the people responsible for the care and education of the youngest members of the community need food stamps, TANF (Temporary Assistance for Needy Families) or other welfare programs just to get by.

“That’s concerning ... and I’m hoping it’ll be a bit of an eye-opener,” Heather Hawk, executive director for the Early Childhood Council of La Plata County, said.

Child-care providers and early childhood education professionals, who care for infants, toddlers and preschool-aged children, work in one of the lowest-paying industries, yet they provide what many deem a critical service.

“I want everyone to understand what a real crisis it is,” Libby Culver, Early Childhood Education Program Supervisor for the 9-R School District, explained.

And, she’s not the only one calling it a crisis. Becca Trefry, a mother of two and executive director for the Durango Early Learning Center, said the problem is much worse today than when she started in the industry 14 years ago.
Child-care centers, like DELC, want to pay their workers more. That’s not the problem. In fact, DELC recently crossed the threshold and is now recognized as a living wage employer by La Plata County Thrive! Living Wage Coalition – but, just barely, according to Trefry. “It was definitely a numbers game,” she said.

Riverhouse Children’s Center, another child-care provider in Durango, is an aspiring living wage employer and working with Thrive! to make it happen. The challenge for both of these nonprofit organizations – which must adhere to strict state and federal regulations – is there are few ways to cut costs. The only way to raise wages is to raise tuition.

This simply passes the cost to families who are often already struggling to pay for child care, which is something DELC and Riverhouse are reluctant to do.

“We don’t want to roll those costs over (to the families),” Darla Malouff, executive director of Riverhouse, said.

In an effort to try and tackle the issue Thrive! has organized a day-long workshop from 8:30 a.m.-4:30 p.m. Fri., Oct. 6, at the Durango Public Library. The event seeks to bring child-care professionals, providers and parents together with business leaders, economists and other community leaders. The idea is for everyone to share stories, statistics and information from different viewpoints, then discuss possible strategies and next steps.

Thrive! Director Maureen Maliszewski said the problem can’t be solved just by people who work in early child care. Everyone in the community needs to come together to find solutions.

Care for a cost

Many factors contribute to the high cost of child care – state and federal regulations, certifications, training requirements, high employee turnover, background checks and more. Some of these costs are absorbed by the facilities, others by the employees and some by the community.

Many child-care workers also sacrifice personal time to further their education or keep up with training requirements. The costs in time and money can be too much. Workers simply can’t afford it and move on to another industry.

Then there’s the issue of health care and other benefits. Trefry, for example, who’s worked at DELC for 14 years and currently serves as assistant director of the facility, does not get health insurance through her employer.

These efforts certainly help, but it’s not always enough. On top of the financial burdens, the job itself is demanding. As an example, child-care facilities are open earlier and later than other businesses to accommodate parents’ work schedules. This makes for a long day for child-care workers,

who may even be sacrificing time with their own families.

These issues are not unique to the Southwest, though. “We know we’re not the only community struggling,” Hawk said. “It’s a national challenge, a statewide challenge.”

With the high turnover rates and high operational costs, most providers can only care for so many children, leaving many in the community without. In fact, many providers have years-long wait lists.

There’s also been a decline in home-based care providers, according to industry professionals, and no reason to think  new ones will pop up.

Without providers, families are left with few

choices. If one parent stays home to care for children, the family is left with only one income in an area known for its high cost of living. Parents may also feel forced to leave children in undesirable situations. In the end, some families may decide it’s just not doable and move away.

“Families with young children just can’t figure out how to live here,” Culver said. “It really is a concern I think our community needs to look at.”

The early childhood education and child-care community has been talking about the challenges of qualified care for some time. It’s an issue they are aware of but have struggled to solve without support and input from the rest of the community.

That’s why it’s so important to get the business community and others involved in the discussion, according to providers and workers. Child care affects everyone – even people who don’t have children or don’t work in the industry.

“There is no such thing as someone who is not impacted by early child care,” Hawk said. 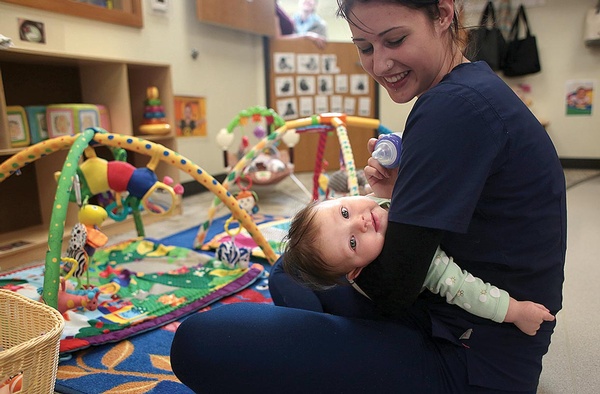 What: Early Childhood Care: Not Just For Kids

More info: The event includes printouts, snacks and drinks, so organizers have asked those interested to RSVP by Sept. 29. If it’s past the deadline, however, they still want people to attend. Just contact the organizers at thrivelaplata.org or ecclaplata.org.

Keeping up with the kids

Other ways to learn more about the issue or stay involved include signing up for the Early Childhood Council’s newsletter at ecclaplata.org, or checking out a recent report put out by the State of Colorado, “Colorado’s Early Childhood Workforce 2020 Plan.” It’s a roadmap for “high-quality, effective and diverse early childhood workforce,” according to the website. Check it out at earlymilestones.org/transformingec-workforce.