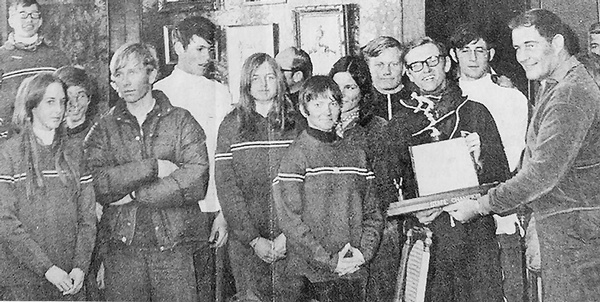 The Durango High School Ski Team of 1971 is getting the band back together. This weekend, members of the team, which took the state alpine and Nordic championships 50 years ago, are gathering at Purgatory to relive the glory and prove they still got the knees.

The weekend will include an alpine race Feb. 27 on Upper Hades – the site of the giant slalom race in 1971 – as well as a Nordic race the next day, Feb. 28, at the Durango Nordic Center.

The 1971 win was not just a fluke, mind you: 1971 was the fifth state championship in six years for the team, which was coached by Jerry Davis. Many young Durango skiers placed or scored in the 1971 race, including seniors Daryl Tomberlin and Mary El Hogan Emrich (both still Durango residents); junior Mary Lee Atkins; and sophomore Jack Turner, also local.

As for the ’71 Nordic event, that was won by senior Britt Lovelace. To commemorate that win, fellow DHS Nordic team member and area resident Ronny Yeager will be in attendance at Sunday’s race. Although Yeager – a two-time Olympic cross country competitor (1972 and 1976) – technically wasn’t at the 1971 race, he has a pretty good excuse. He was competing in Finland at the World Junior Championships at the time.

Saturday’s alpine race happens from 10 a.m. – 3 p.m. on the Upper Hades NASTAR course. Purgatory has arranged for free lift tickets to members of the 1971 team who wish to attend. The Nordic race will take place at 1 p.m. Sunday.